The EU needs to change course for a toxic free world 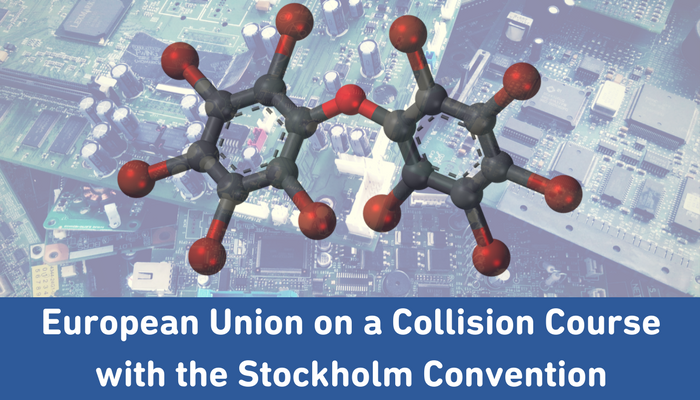 The COP will be an important forum for the discussion of policies that could determine the global future of the circular economy.

Between the 24th of April and the 5th of May, Zero Waste Europe will be in Geneva, attending the ‘super-COP’ (Conference of the Parties) covering 3 major global conventions on toxics: the Stockholm Convention on Persistent Organic Pollutants (POPs), the Basel Convention on the Control of Transboundary Movements of Hazardous Wastes and their Disposal, and the Rotterdam Convention on the Prior Informed Consent Procedure for Certain Hazardous Chemicals and Pesticides in International Trade. At the conference, Zero Waste Europe will be promoting our newest policy briefing opposing exemptions for decaBDE.

The COP will be an important forum for the discussion of policies that could determine the global future of the circular economy.

Despite the significance of this meeting it remains largely unknown, an inaccessible policy arena shrouded in jargon and secrecy. The meeting covered largely by trade journalists rarely makes headlines, but the decisions made here affect the lives of millions of people.

What is worse is that in this largely unreported conference EU delegates and representatives are actively pushing for the implementation of policies which could jeopardise the creation of a clean circular economy in Europe and around the world.

A significant point of concern for observers of the conference are the substances which are listed to be banned under the Stockholm Convention. These substances include hormone-disrupting chemicals which are extremely resistant to breaking down in the environment. Known as Persistent Organic Pollutants (POPs) many of these chemicals have already been banned under the convention. However whilst the effects of these chemicals on the environment and human health is well documented, when it comes to a chemical used as a flame retardant called decaBDE, the EU has continued to lobby against increasing regulations.

EU delegates at the conference are actively pushing for less stringent regulation and specific exemptions for the recycling of waste containing decaBDE. The position of the EU is significantly weaker than the recommendations from the conventions expert committee which calls for no recycling exemptions and an immediate ban of decaBDE.

Time to act for a clean and safe economy

As recycling increases it is a matter of time before a scandal about toxics in recycled material explodes damaging the image of recycling and of the Circular Economy strategy. For this reason it is imperative to move quickly in the restriction of hazardous substances and organise a proper tracking of polluted waste streams to ensure a reliable and safe secondary market for raw materials.

The EU needs to ensure that their delegates advocate for strong international policies on toxics including decaBDE which fully align with the European Circular Economy. A large proportion of Europe’s electronic waste (WEEE) is exported to countries in the Global South ostensibly to be recycled, however it can often end up in dangerous dumping sites, where toxic chemicals can harm the environment and human health. If the EU continues to argue for these exemptions it will be recycling and waste workers in these countries who will bear the full burden of toxics in our recyclables. The EU needs to be consistent in eliminating toxic chemicals from our products, including those which are going to be recycled and lead the way to a clean and safe economy.