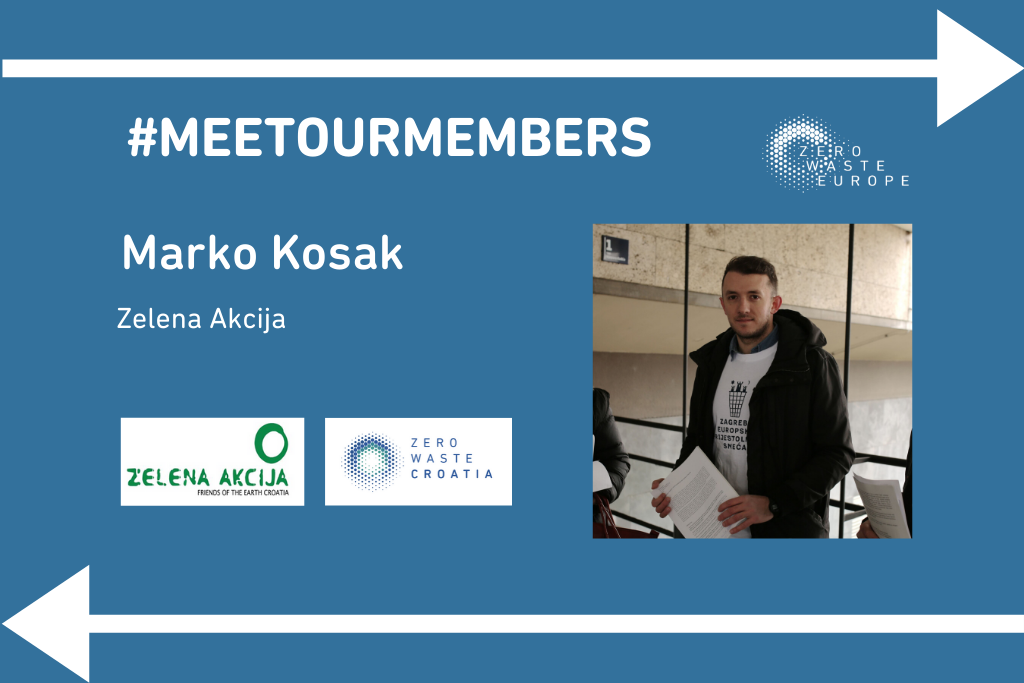 Hi Marko, can you give us a brief introduction to Zelena Akcija?

Green Action is an association of citizens in Croatia for the protection of the environment and the promotion of sustainable development at the local, national and global level. We have been working actively since 1990 and just a few days ago we celebrated our 30th anniversary.

Green Action achieves its goals through nonviolent direct action, campaigning, projects, informing and educating civil society, cooperation with other organisations and public participation. Even though we are a team of professionals (16 employees), our volunteers play a very important role in our Activist group.

We are also a member of numerous European and international networks such as  Zero Waste Europe, Break Free From Plastic, Friends of the Earth, European Environmental Bureau, Justice and Environment, Climate Action Network, IPEN etc.

In Croatia, we lead a network of NGO’s and civic initiatives as part of the Zero Waste Croatia Network and we are also in the coordination team for the network of environmental NGO’s Green Forum. We divide our work by programs into sustainable waste management, climate and energy, transport, nature protection etc. Within our Sustainable Waste Management Program, we are working on many fields such as zero waste cities, single-use plastics, food waste, separate collection, DRS, reuse, repair, home composting etc. We also organise a lot of activities for citizens such as the Environmental Movie Festival, Solar Academy on Šolta Island, Autumn Eco-Seminar, Plastic Free Week, and Bicycle repair Café.

As a student, in 2010 I joined Green Action for my student job and volunteering. I was motivated by the successful work of Green Action and familiar with the environmental and waste management issues, and after graduating from college in 2014, I applied for the assistant position in the Nature Protection Program in Green Action. Luckily, I was offered the position, and that’s when my career in waste management began.

I am very happy that I was able to start working on waste issues. I’ve met lots of great people who changed my professional and personal life and pushed me to do my best to influence more and more policies and people to reduce waste and protect our environment. 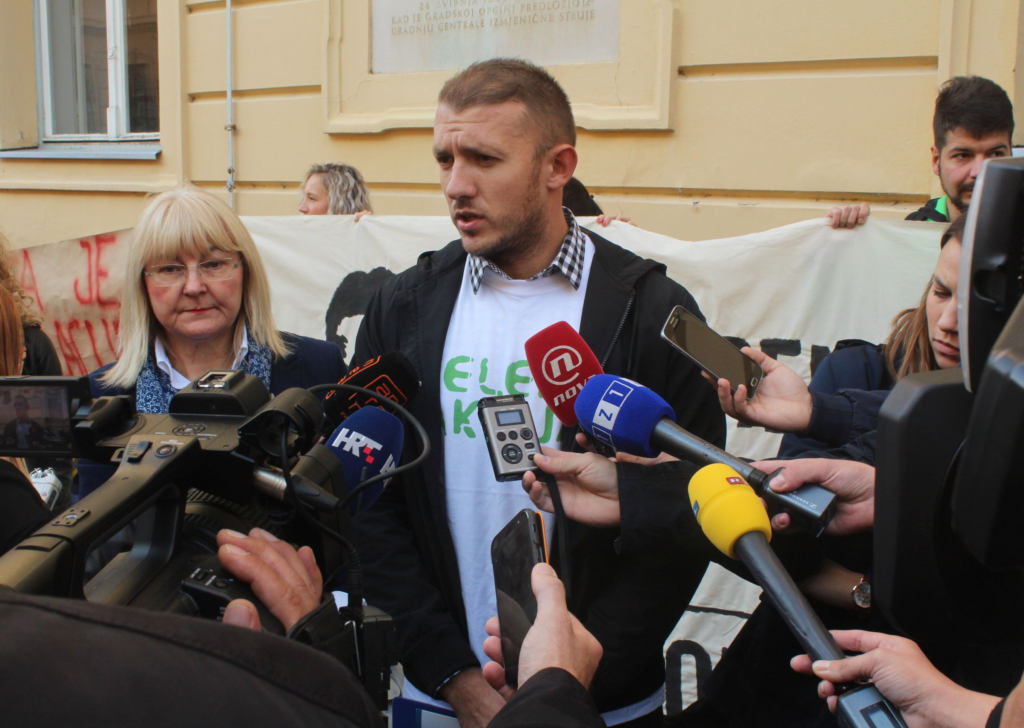 Since 2015, I’ve been coordinating the work of the Sustainable Waste Management Program, which includes the implementation of numerous EU and national projects with very diverse activities, coordinating the network of zero waste municipalities in the Republic of Croatia, giving recommendations to municipalities, companies, restaurants, cafes, festivals and other NGOs, participating in working groups of several international networks, education and advocacy campaigns (street actions, meetings, protests, etc.) to stop harmful projects such as incineration and ineffective waste collection.

I am also a member of the Green Action Steering Board and of the Advisory board of  Break Free From Plastic Europe.

I am mostly working on a major campaign “Zagreb – the EU capital of trash” pushing for improvements to the a waste management system in the capital city of Zagreb, where the mayor raises bills, privatises waste management and in short, is making the situation worse.

Our activities are numerous, but perhaps the most important to note was our recent protest on the main square in Zagreb. More than 20,000 people came to support making it the largest protest ever against our mayor in the past 20 years of his governance in Zagreb during which time he has been accused of numerous wrongdoings. The protest gave us motivation to move on with our campaign for a better waste collection and treatment system and for a pay-as-you-throw (PAYT) payment system.

From our many projects, I would like to highlight just a few of most recent projects that I am working on: 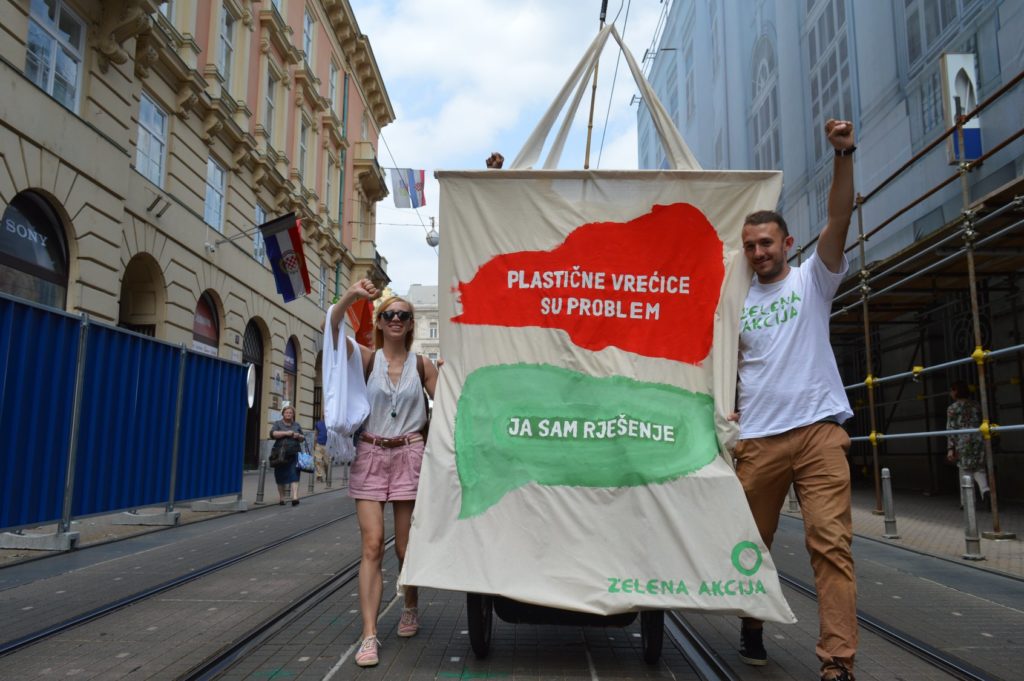 Similarly, another success story was the creation of some of the first zero waste municipalities. In 2015 I prepared recommendations for improving the local waste system according to the zero waste strategy in 7 municipalities in North Croatia, and very quickly they became leaders in separate waste collection and waste reduction. With this victory, we showed that zero waste is possible and were able to convince other municipalities to resist the harmful national policies and pressures created over the past years.

We are the corrective of every government, the incubator of good ideas and the driver of positive change. We have proven that zero waste is not a utopia, but a reality, and now we are making it mainstream.

More and more, people in Croatia are recognising that zero waste is not a utopia, but a reality. Numerous cities, cafes, restaurants and companies are contacting us for recommendations on how to reduce waste. Unfortunately, the national policy doesn’t allow for this as effectively as it could, as it only supports very slow implementation measures as listed in the EU directives.

We also recently got our first plastic-free island and the first plastic-free hotel and we hope these kind of breakthroughs will continue. At Green Action we are very pleased to coordinate a network of successful zero waste cities and initiatives. We help them with various activities such as repair café, plastic-free week, and numerous workshops and with all this work we are contributing to awareness-raising throughout Croatia.

You can find more about Zelena Akcija, and their work here.