Copenhagen goes all in on incineration, and it’s a costly mistake 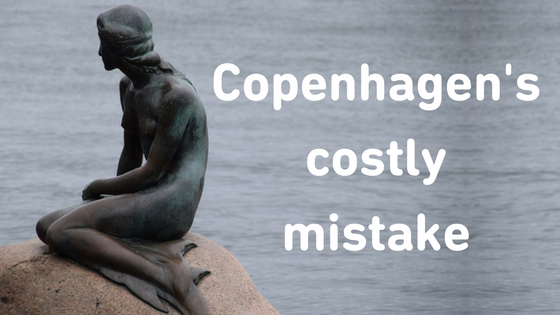 A costly mistake for the city of Copenhagen

The number one rule of investing is to buy low and sell high. Copenhagen, however, with the construction of the infamous Amager Bakke waste to energy plant, doesn’t see it that way.

Listed at an estimated 500 million euros, the experiential Amager Bakke incineration unit in Copenhagen is the most expensive of its kind in what’s widely considered to be one of Europe’s greenest countries. Although already astronomical, the 500 million euro figure is set to grow, as the plant has already experienced a technical failure since opening in May; a failure that has greatly impeded its ability to process the current stream of waste incoming. In response, the Danish government has granted the municipal waste disposal company, Amager Ressource Center (ARC), permission to store the tons of unprocessed waste until the problem has been resolved.

That’s not the only issue to have confronted Copenhagen’s prized possession. In October of 2016, during its construction, the technical installation of the large combustion furnaces that form the core of the Amager Bakke plant failed, costing an additional 13 million euros and ultimately tacking on a delay of 7 months to the project, which was set to open in January of 2017.

Apart from its already costly bill, most of which will fall on the shoulders of heating customers in Copenhagen, the plant’s processing capacity is far too high – 400 000 tons of waste annually. Because of this, if the plant operates under capacity and puts up losses, the taxpayer would be the one to bear the deficit. According to Danish newspaper The Murmur, to reach capacity an additional 90 000 – 115 000 tons of trash would be needed, of which the Danish government has already envisioned attaining through imports, clashing with not only their own resource strategy, but also the EU’s.

In a recent communication on the role of waste to energy in the circular economy, the European Commission upheld Zero Waste Europe’s stance on the future of waste management citing that ‘waste management is one of the main areas where further improvements are needed and within reach: increasing waste prevention, reuse and recycling are key objectives both of the action plan and of the legislative package on waste’. The communication adds that ‘mixed waste still accounts for a substantial share of the waste used in waste-to-energy processes, mainly incineration (52 %). Existing legal requirements and the circular economy waste proposals are bound to change this situation. Rules on separate collection and more ambitious recycling rates covering wood, paper, plastic and biodegradable waste are expected to reduce the amount of waste potentially available for waste-to-energy processes such as incineration and co-incineration’.

To us zero waste advocates, that’s like music to our ears. For incineration geared countries like Denmark, however, the Commission’s statements are a sign of nightmares to come. With less waste around to burn moving forward, Copenhagen’s new, shiny furnace will have much more down time, leading to profit losses and monetary burdens for citizens in years to come.

It’s clear that the future of the circular economy hinges on the success of sustainable waste management, in which incineration plays a minor, if not nonexistent, role. In Denmark’s case, although incineration significantly reduces the amount of waste in landfills, prioritizing its use over a modern approach to separate collection has stunted the growth of recycling rates. 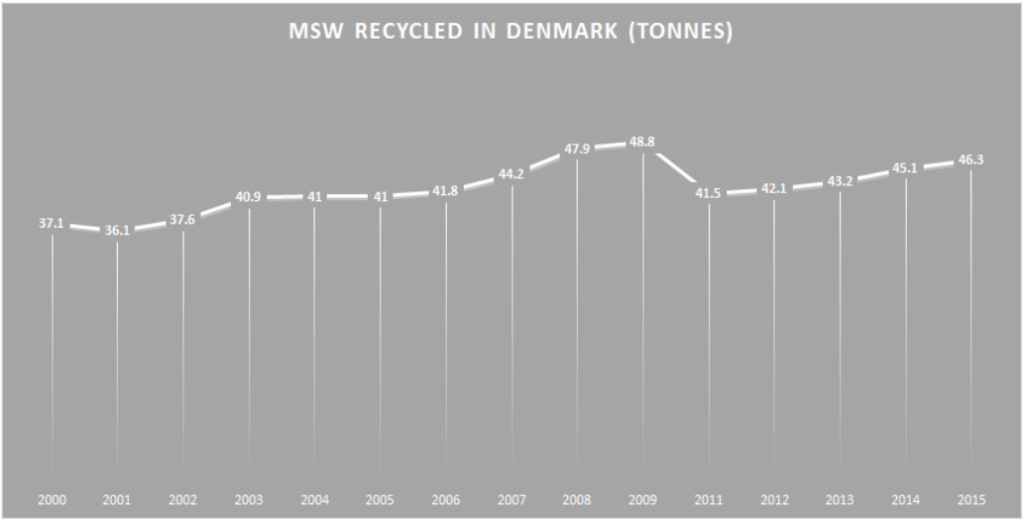 *Municipal Solid Waste recycled in Denmark. Data from 2010 is not available. Source: Eurostat

The dangers of incineration centric waste management systems are apparent, making it all the more surprising that Copenhagen doesn’t see the writing on the wall. Or maybe those in charge are just too busy planning a trip to the slopes to care. Until now, the economic problems associated with overinvestment in incineration have been compensated with the importation of massive amounts of waste, mostly from the UK, which in 2015 alone brought 728.135 tonnes of foreign waste to Denmark, equalling 128,12 kg per Dane. This strategy is unstable, especially with the uncertainties surrounding Brexit, including whether Denmark would be able to keep importing British waste. To boot, the city of Copenhagen recently began separately collecting biowaste (rightly so), further reducing the potential waste the new plant could process. The future looks bleak, and with all of the problems the Amager Bakke incineration plant has faced thus far, the investment is already looking foolish for the former European green capital, just months after its launch.“It’s clear that the future of the circular economy hinges on the success of sustainable waste management, in which incineration plays a minor, if not nonexistent, role.”