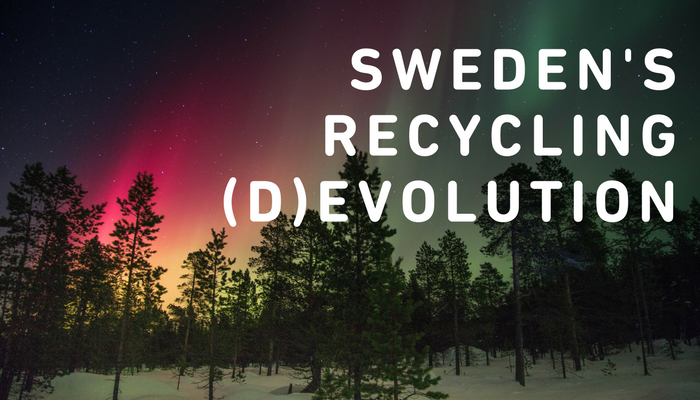 Sweden is not known for its lack of innovation. In fact, in the 2016 Global Innovation Index conducted by Cornell University, INSEAD and WIPO, Sweden sits only behind Switzerland as the second most innovative country in the world. And while Sweden is credited with innovations like the Solar safe water system and Spotify, much of their innovative brain power has been channelled into tackling one of the world’s biggest problems – waste.

As the world ponders on and builds sustainable solutions to deal with waste, Sweden has taken immediate action, applying a drastic approach to waste management in large scale incineration. Home to a total of 32 incineration plants, Sweden has incinerated an average of nearly 50% of all its Municipal Solid Waste (MSW) between 2000 and 2015.

Thanks to their increased efforts in incineration, the amount of trash sitting in Sweden’s landfills measures only 1% of their total MSW, eliminating harmful greenhouse gases (GHG) like methane, which is 20 times more potent than carbon dioxide, from the atmosphere. Additionally, Sweden has found success in decreasing its dependency on fossil fuels by harnessing energy from the waste itself through incineration. Roughly three tons of waste equals one ton of fuel oil, which is quite a good ratio considering waste is more abundant than fossil fuel in this day in age. In fact, it’s for this very reason that Sweden has turned waste into a lucrative commodity. By selling their incineration services and importing trash from countries that are willing to pay the price for greener pastures, Sweden has deepened their pockets and captured nn more energy for its plants and municipal utility services.

In relation to waste management, it would seem like Sweden has reached the Promised Land. Even if that were true in the short term, on a large scale, and in the long term, this strategy has negative effects on the very foundations of zero waste and the circular economy.

Sweden claims to be undergoing a recycling revolution, boasting that they recycle nearly 100% of household waste. But how could that be true when nearly 50% of their waste is incinerated. Incineration and recycling are two completely different things. Between 2000 and 2015, Sweden recycled an average of 33% of its total MSW (excluding compost).  In 2015 alone, Sweden recycled only 32% of its total MSW (48% with compost included), which is still a ways away from the European Commission’s common EU MSW recycling target of 65% by 2030. When it’s all said and done, however, Sweden ranked sixth among European countries in recycling in 2015. That might seem like cause for celebration, but their increased focus on incineration over the years has brought about stagnation in recycling rates since 2006.

Sweden’s stagnating recycling rate is concerning because as waste incineration becomes an increasingly reliable source of energy for them and their dependency on it grows, there is less motivation to better recycling efforts countrywide. In some cases, sorted trash actually gets incinerated, further demotivating municipalities and individuals to invest time and money into waste separation. For this reason, many recyclables are lost through incineration, leading to the destruction of valuable goods that would normally contribute to a higher, more efficient recycling rate and production cycle.

Sweden’s increased dependency on incineration for their energy and economic needs has prompted them to continue building plants, which are very costly to both build and run, not to mention the pollutants that they produce. According to the EPA, quoted in Treehugger and Slate, incineration plants release about 1.3 times the amount of CO2 per megawatt generated than burning coal does, and they have been shown to release many other toxic chemicals such as dioxins. And while much of the CO2 would have been emitted from the waste over time anyway if left untouched, the fact that it’s being released all at once is cause for concern. From a cost perspective, a cost-benefit analysis on waste incineration conducted by Columbia University shows that plants can cost upwards of 100 million euros to construct and anywhere from 3 – 7 million euros yearly to maintain. And in order to make a return on investment, incineration plants have to process steady amounts of waste. This puts Sweden between a rock and a hard place as their reliance on generating waste to keep up with their energy and economical demands goes against their zero waste claims and the very basis of the circular economy.

Importing garbage for energy is good business for Sweden from Sweden on Vimeo.

Weine Wiqvist, Swedish Waste Management and Recycling Association CEO, cited “’Zero waste’ – that is our slogan. We would prefer less waste being generated, and that all the waste that is generated is recycled in some way. Perfection may never happen, but it certainly is a fascinating idea.”

Hopefully Sweden will strive towards increasing their recycling targets moving forward and lessening their overall MSW, however, as it currently stands, their actions do not correlate with the principles of zero waste, unlike their official claims. Under zero waste, the goal is not to use waste as a commodity, but to eliminate it altogether. A system based on reducing, reusing, and recycling can take us there, but only if large scale incineration is restrained. The European Parliament’s ENVI committee has recently proposed to exclude financial support for the incineration of mixed MSW, effectively restraining large scale incineration and prioritising waste reduction if approved at the parliament level.

So what’s your move, Sweden?