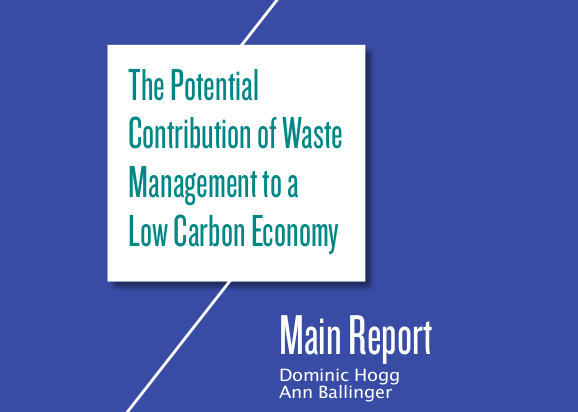 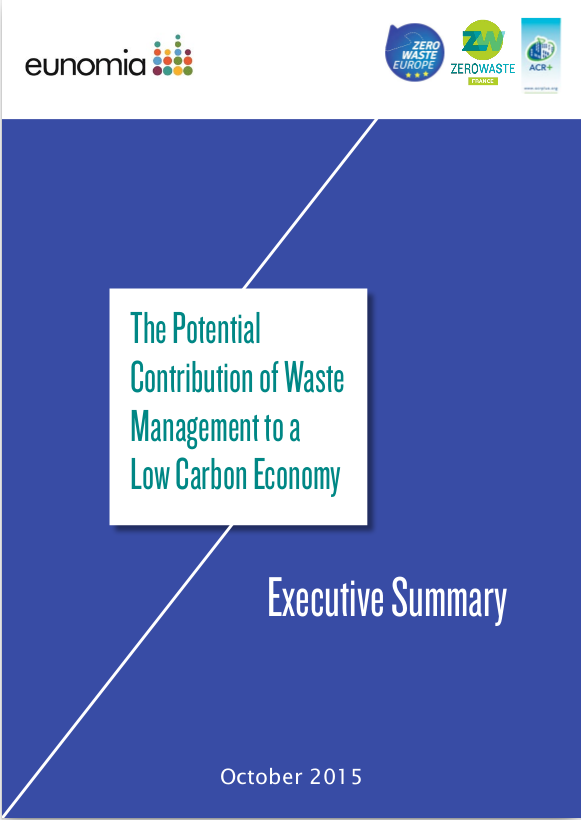 Download full Press KitA newly released report has found the waste sector has a key role to play in the development of a low carbon economy and the reduction of greenhouse gases (GHGs). The report will be launched at a press conference, organised by Zero Waste France in Paris on Tuesday the 27th. This report comes in advance of the UN Climate Conference in Paris, which will take place in December.

The report was commissioned by Zero Waste Europe, in partnership with Zero Waste France and ACR+. The report finds that the role of waste prevention and improved waste management can play in reducing GHG emissions and the development of a low carbon economy has previously been significantly understated, partly due to the structure of the national inventories of the UNFCCC.

The report further provides an accurate examination of the true impact of waste management on climate change and carbon emissions. It confirms that actions at the top of the waste hierarchy – including waste prevention initiatives, reuse and recycling – have considerable scope to reduce climate change emissions.

As the report states “A climate friendly strategy, as regards materials and waste, will be one in which materials are continually cycling through the economy, and where the leakage of materials into residual waste treatments is minimised”. For example, recycling 1 tonne of plastic packaging can be a saving of 500 kg CO2 eq, whereas using one tonne less plastic packaging results in avoiding 6 times more emissions (3 tonnes CO2 eq).

In the report 11 key recommendations are made, calling for waste policies to be redesigned in order to prioritise the higher level options of the ‘Waste Hierarchy’ (waste prevention, reuse and recycling) and immediately reallocate climate finance subsidies which are currently supporting energy generation from waste. These recommendations put a strong focus on correcting methodological issues that are currently preventing Member states and the European union from implementing waste policies that are efficient in terms of GHG emissions.

The report shows that in the decarbonising economy required to mitigate the worst impacts of climate change, technologies such as incineration will become less attractive options and ultimately present an obstacle to a low carbon economy.

Mariel Vilella, Zero Waste Europe’s Associate Director said “For far too long the climate impact of waste management has been overlooked. Now it’s clear that waste prevention, reuse and recycling are climate change solutions that need to be fully integrated into a low carbon economy. Both at the EU and international level, it is time to shift climate finance support to these climate-friendly options instead of waste incineration, which in fact contributes to climate change and displaces livelihoods of recyclers worldwide.”

Delphine Lévi Alvarès, Zero Waste France’s Advocacy Officer,said: “With France hosting the COP21 in December, it is a real opportunity to raise decision makers’ awareness about the real impact of waste management on climate change and the extent to which Zero Waste strategies have to be put on the agenda of solutions to climate mitigation supported by the French government.”

Françoise Bonnet, Secretary general of ACR+ said: “Efficiency and smart waste management is key for a low carbon economy. Still, it is only the tip of the iceberg as a much bigger impact can be achieved through resource efficiency and adopting a life-cycle perspective”.

Zero Waste France – Zero Waste France (formerly Cniid – Centre national d’information indépendante sur les déchets) was founded in 1997. As an independently funded NGO and a member of Zero Waste Europe, it has been advocating for waste reduction since then, talking to local and national public officials as well as citizens groups or businesses. In 2014 the organization changed its name to Zero Waste France to emphasize its ambition but also the links with the other groups involved in this issue worldwide. Zero Waste France works closely with local stakeholders – among them its 2,000 members (individuals and groups) to encourage and implement Zero Waste strategies at the local level. www.zerowastefrance.org

ACR+ – The Association of Cities and Regions for Recycling and sustainable Resource management (ACR+) is an international network promoting sustainable resource management through prevention at source, reuse and recycling. Through its activities, ACR+ strives to develop the expertise and skills of public authorities in effective waste-product-resource policies. Building on a 20 year experience, ACR+ launched in November 2014, the Circular Europe Network, a multi-stakeholder platform aiming at supporting local and regional authorities in adopting aspiring circular economy strategies. www.acrplus.org