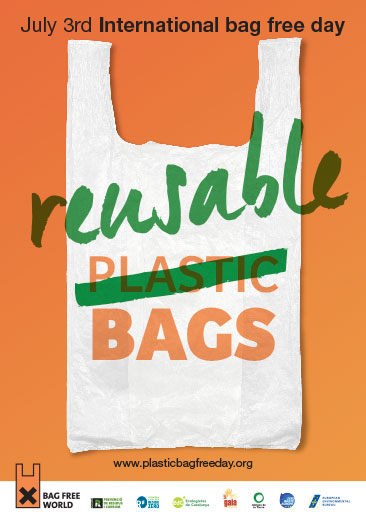 The sixth edition of International plastic bag-free day sees groups from all over the world organising activities to raise awareness on the environmental impact of single-use plastic bags and to demand that governments act to stop marine littering.

Every year, the average EU citizen uses an estimated 500 plastic bags [2], 92.5% of which are single-use. Around 90 billion single-use plastic bags were used in the EU in 2010 [3]. Plastic bags make up around 40% of all the marine litter across UK waters and the North Sea [4], and a 2009 study showed that in the Bay of Biscay over 90% of waste items found on the seabed were plastic [5]. These petroleum based products contain toxic additives such as endocrine disruptors and carcinogens, which can migrate into marine environments and enter the food chain via marine fauna.

European citizens think it is time to take action. A 2014 survey carried out by the European Commission, found that 92 % of respondents agree that measures should be taken to reduce the use of single-use plastic items, such as shopping bags [6].

– taking measures to reduce annual average consumption of lightweight plastic carrier bags to 90 per person by the end of 2019, and 40 by 2025;

– or by ensuring that by the end of 2018, no more lightweight plastic carrier bags are handed over free of charge to shoppers.

Member states have a 18-month limit to transpose it into their national law.

However, this law allows oxo-degradable bags to continue to be used in Europe despite their disastrous impact on the marine environment, where they degrade into smaller pieces of plastics impossible to remove from the environment.

Joan-Marc Simon from Zero Waste Europe said: “Plastic pollution is a global problem waiting for a global solution. As an international player, the EU should lead by example and not lag behind other countries in reducing usage of single-use plastic bags. The EU has now a target for reduction in the use of plastic-bags, we call on member states to put in place necessary measures to make this a reality.”

Marta Beltran from Fundació Prevenció de Residus said: “Our society can not afford the waste of resources and the environmental, social and economic impacts of plastic bags, including the oxo-degradables bags whose impacts on the trophic chain must be avoided. We want Zero Plastic Bags everyday; it’s time for reusables.”

Meadhbh Bolger from Friends of the Earth Europe said: “Single-use plastic bags are an iconic example of how Europe is stuck in a linear economy, dependent on the continuous extraction of scarce virgin resources for throwaway products. EU decision-makers need to ensure that the new Circular Economy Package makes sure we keep resources in the economy for as long as possible and that reduced consumption, reuse and recycling are the norm across the continent.”

Antidia Citores from Surfrider Foundation Europe said: “29 European cities have already committed to ban single-use plastic bags within our “Ban the plastic bag campaign”. The European directive recently adopted now gives the possibility to EU member states to legally ban single use plastic bags. We now call on Member States, cities and citizens to engage themselves in our campaign and say no to disposable plastic bags which affect so strongly the marine environment.”

Piotr Barczak from European Environmental Bureau said: “The case of unnecessary plastic bags clearly shows that improving environmental performance and waste management does not rely only on modern solutions, but is often about societal change. Very often we just need to look at the modes of consumption that were present decades ago and that had much less impact on the environment, like, in this case, reusable packaging.”

The sixth edition of International plastic bag-free day sees groups from all over the world organising activities to raise awareness on the environmental impact of single-use plastic bags and to demand that governments act to stop marine littering.

[3] Green Paper On a European Strategy on Plastic Waste in the Environment.

To find out more about the international plastic bag-free day see: www.plasticbagfreeday.org

Surfrider Foundation Europe is an environmental association, statute 1901, created in 1990 in France (Biarritz). During its existence, it has achieved real expertise in the areas of research, local action, as well as the creation and diffusion of educational tools. Today, it consists of a network of 1,700 volunteers, 10,000 members and 100,000 supporters in forty local offices that are active in twelve European countries. Find out more: www.surfrider.eu

The European Environmental Bureau is Europe’s largest federation of environmental organisations with more than 140 member organisations who gain their membership from the general public. The EEB is guided by the voices of 15 million European citizens, and acts as the ears and voice of its members towards EU decision makers and beyond. http://www.eeb.org/

Friends of the Earth Europe is the largest grassroots environmental network in Europe, uniting more than 30 national organisations with thousands of local groups: http://www.foeeurope.org

Fundació Prevenció de Residus i Consum -Catalan Foundation for Waste Prevention and Responsible Consumption- is a nonprofit organization driven by environmental organizations, universities, companies and municipalities. It promotes campaigns (like the International bag-free day, that begun in 2008 as a Catalan scope and leaded to the annual celebration worldwide) and projects in order to shift to a circular economy and a resource efficiency society. www.residusiconsum.org

“Plastic pollution is a global problem waiting for a global solution.“