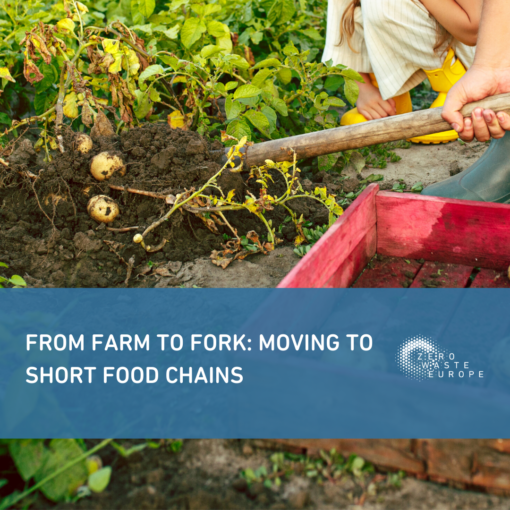 From Farm to Fork: Moving to short food chains

The current COVID-19 crisis is showcasing the lack of resilience in European food systems, exposing the system’s vulnerability and inequality. On one side of the world agricultural produce is ‘disappearing’ from fields because markets and seasonal forces are struggling, while on the other side of the planet, countries are experiencing food shortages because foodstuff is no longer able to cross national borders.

In this context, the release of the Farm to Fork (F2F) Strategy represents an important opportunity to profoundly reshape our relationship with food and design a new reality for our food systems: one that will increase links between healthy food, social equalities and sustainable food production. Achieving this, and supporting the global food transition to a food system that works for both people and planet, requires a holistic vision leading to coordinated actions all along the food supply chain. This means addressing food activities along the full length of the food chain; from farm to fork.

The F2F Strategy is an essential part of the European Green Deal and of the broader goal to turn Europe into a climate-neutral continent by 2050. With the strategy’s ambition of favouring short distribution routes, this crisis provides an interesting context, revealing the many dysfunctions of our current food systems across local and global food chains.

Looking specifically at closing the gap between producer and consumer – a key aspect of the F2F strategy – raises questions around why clear objectives that specifically focus on the importance of shorter food chains are missing? This strategy will be essential in preparing the road ahead for a radical change in our food systems. In current contexts, this means the European Institutions must deliver in prioritising the improvement of food chains and concrete action on how to put the development of short supply chains higher up on its agenda.

In the midst of this crisis we are all experiencing, it’s hard not to be increasingly aware of a staple for human survival: food. The public realisation that our food supply is under pressure has translated into extreme and highly unsustainable patterns of consumption: panic buying and hoarding have led to empty supermarket shelves with often disastrous results.

But, these concerns about food insecurity and shortages in affluent countries are mostly irrational, as these subjective experiences stand in sharp contrast to the rise of food waste in many countries worldwide. COVID-19 has seen levels of food waste in wealthy economies increasing from around 30% to 40% (that’s the percentage of food wasted out of the total amount of food produced, distributed and consumed).

One reason for the rise in the level of food waste is that traditional big buyers — like restaurant chains — suddenly halted orders from farmers. As a result, EU farmers have struggled to find alternative distribution channels for their surplus food and have had to throw away their agricultural produce. In the United States, farmers have had to watch their fresh produce rot away on their fields, while French dairy farmers are dealing with huge amounts of surplus cheese. The system is such that large quantities of food that could otherwise have been sold to consumers is being left to rot, and yet people are still going hungry. This is a huge paradox that points to the need for serious upheaval in terms of food logistics. One is forced to question the true meaning of ‘fairness in our food system’ and the lack of proper information to consumers about food availability in our own countries. 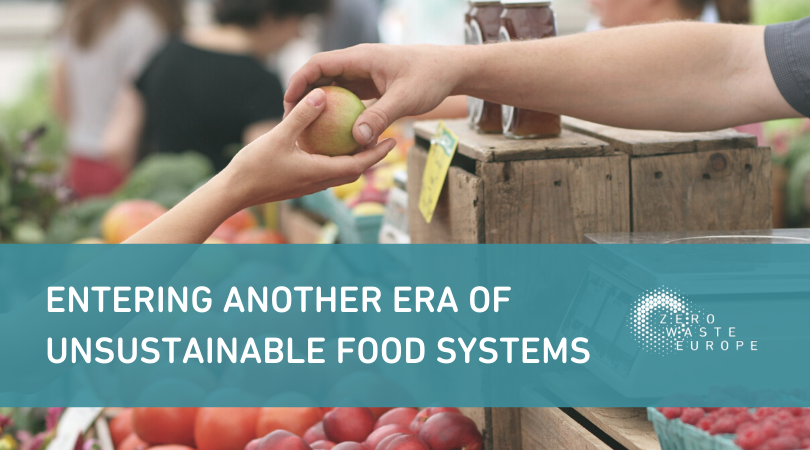 It is not a ‘new thing’ to see that our globalised food systems are unsustainable and that we need to speed up the food transition. In dominant conventional food systems, food moves through lengthy, complicated food chains, leading to an alarming amount of packaging. And even though global supply chains have experienced brief disruptions due to unsustainable food consumption patterns, food has continued to flow along these chains in large quantities. It is only now that we are in this crisis, that this malfunctioning and lengthy food system is becoming visible. The pandemic has added fuel to fire through disruptions to current food supply chains, including the movement of food – but these problems are not new.

The Dutch Case: eating more fries to save the potato 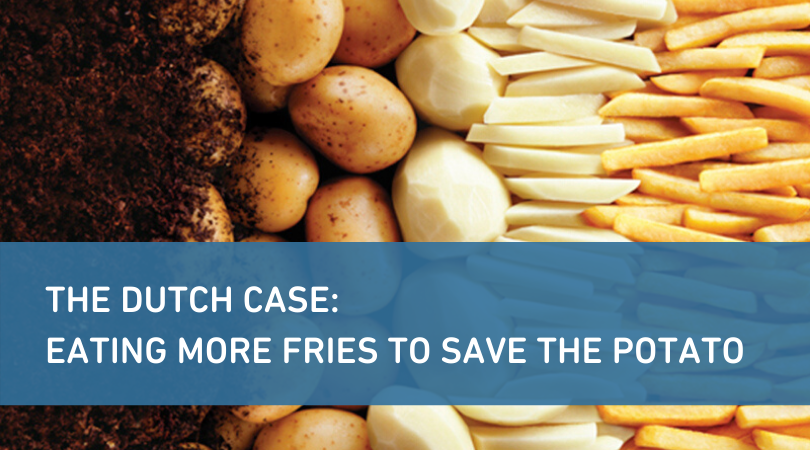 Being the world’s top exporter of potatoes and one of the leading producers of potatoes for global food chains, quarantine restrictions have hit the Dutch potato sector big time. With the worldwide closure of hospitality and catering establishments, Dutch potato farmers face an inability to sell their produce. With the sharp decline in the value of potatoes and supermarkets prioritising contracts with foreign potato suppliers over national produce, potatoes are stuck in farms across the country. In particular, large quantities of potatoes that are normally processed into fries, lack a destination as demand has declined. Processors who primarily supply these potatoes to food service buyers simply don’t have the infrastructure to quickly pivot to retail.

This led to a national campaign promoting the consumption of surplus potatoes under the motto ‘’save the potato farmers, eat some extra fries.’’

Well, great that the government is taking action in increasing public visibility of this national issue. But, eating some extra fries a week won’t do the trick. More importantly, it puts the responsibility of society’s broader issue of food waste on the consumer. This is an alarming issue that needs more than a temporary awareness campaign.

What this case shows us is the vulnerability of food supply chains and the urgent need for structural change in the way our agricultural landscape is designed. It demonstrates the current gap between primary producers and final consumers that needs to be addressed in the F2F Strategy.

The feeling of uncertainty and ‘food insecurity’

We critically need to rethink our food supply chain, and the F2F strategy is the perfect arena to explore the possibilities of favoring short distribution routes.

However, whether short food chains and local produce can actually feed the world is another area of debate. Also, radically transforming food systems towards short food chains, could invoke food insecurity in impoverished countries. Especially on the African continent, many countries depend highly on imported food and short food chains would also deprive them of their ability to produce for export. Yet, we are seeing that long, complicated food chains are becoming more unstable under crisis circumstances. Uncertainty is high in COVID-19 times, and this also means unknowns for the future of our food supply. This feeling of ‘food insecurity’ is exaggerated by recent changes in export policies for staple foods that EU food markets highly depend on. An example is Cambodia and Vietnam banning exports of rice in order to feed their local populations.

The fear of long food supply chains may be another turning point for food behaviour change and consumer awareness.

The role of social innovation for short supply chains 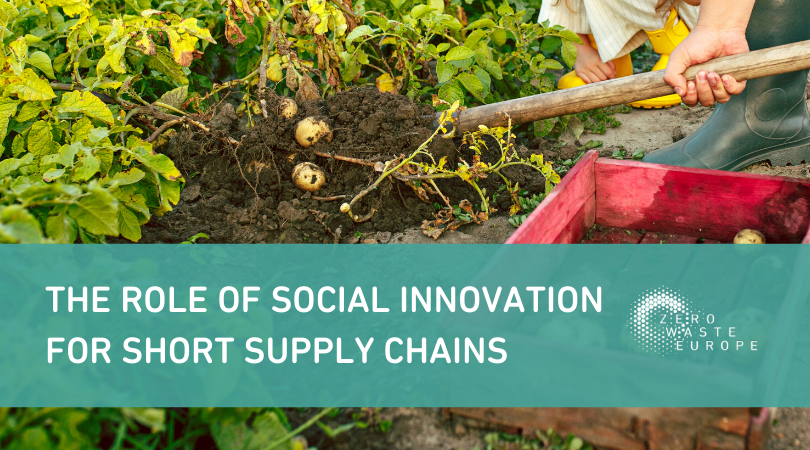 To avoid scarcity of food supplies, direct sales platforms from producer to consumer are gaining momentum. Group purchasing structures for agricultural produce are operating at full capacity and are overwhelmed by demand. Another Dutch example that showcases this increase in demand is Rechtstreex, an innovative social food enterprise that makes it possible to buy your groceries online from local farmers, growers and producers within 50km of the city Rotterdam.

Socio-entrepreneurial initiatives such as these show that short supply chains and the use of online delivery methods are performing well under the strains of the crisis. The growth in local food demand and the further development of alternative distribution channels prove the potential for new local level business models to be scaled up. These short food chain initiatives also add important social benefits to our society. They connect consumers with local produce and create more social cohesion (something that is vitally important for keeping us strong in times of crisis). Also, by reducing the number of intermediaries via direct sale from producers to consumers, it makes the logistics easier for the setup of reusable packaging or packaging-free systems. A win-win situation indeed!

Is this a turning point for a radical change in our global food systems? Will this new mode of food convenience and local food security last, or is this just a temporary consumer trend? What role will short food chains play in food security during and after COVID-19? And more importantly, what is holding EU governments back in taking direct action to support small-scale farmers, the prioritisation of local food and key steps to avoid food waste?

Many questions are left unanswered, but one thing is certain: the COVID-19 pandemic learnings should be reflected in the way we shape our food systems in the future as part of the Farm to Fork strategy.

This crisis offers the opportunity to start transforming our food system for the better: one that is driven by fairness, stability and increased self-sufficiency.

This is a wake-up call for all EU governments – the way we produce and consume food is out of control. Now is the time to make important changes for the long-term transformation of our food system, breaking free from the dominant business-as-usual food regime that just isn’t working. Let’s choose a joint transition pathway that will support short food chain developments and start designing a food system that can respond faster to future shocks and crises. Clear objectives are needed on how to support the growth of local distribution channels, so that food waste can be prevented and surplus food redirected to its local consumers are critical. 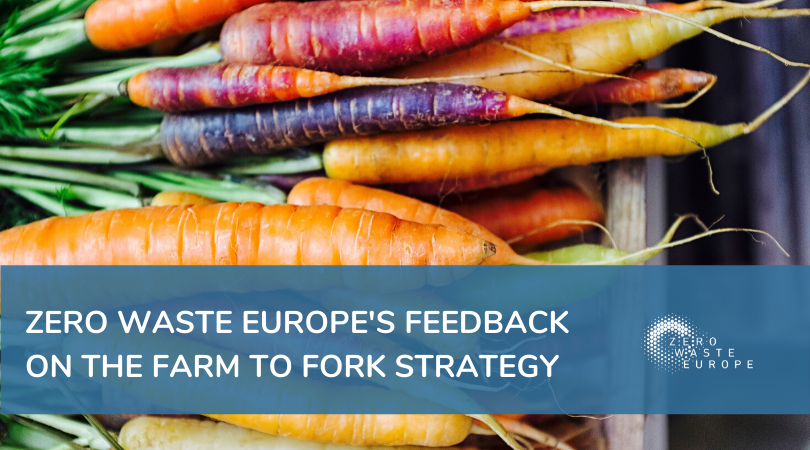 We need participatory food governance models, so that co-creation and other forms of collaborative innovation can flourish. Let’s start with designing food policy infrastructures in which all stakeholders in the food systems have a say in shaping future food systems. Let’s make food policy councils obligatory in every city in the world and make sure participation is inclusive and safeguards its citizens for future food crises. Let’s create the building blocks of our new food reality.

Do you want to know more? Read the Zero Waste Europe Feedback on the Farm to Fork Strategy.

As the world still fights against COVID-19, we continue working for a future without waste and that works for both people and the planet. This article is the first chapter of our brand new series telling the story of how a fair food system could help create a zero waste and more sustainable future for all!

Read the second chapter of the series: here.