This year the International Plastic Bag Free Day turns 8 and we have seen some spectacular actions! The movement to rid the world of environmentally destructive single use plastic bags continues to grow, and their ultimate replacement with clean, reusable and cool alternatives looks ever more possible. Across the globe we have seen an incredible range of actions, from sand sculptures in Catalonia to upcycled furniture in Uruguay with many more in between. Check out our round-up of just some of the actions which caught our eye!

A joint statement was released by a coalition of organisations including Zero Waste Europe, Surfrider Foundation Europe, and others calling for the European Member States to take the final step and ban the use of plastic bags, replacing single use options with more sustainable and reusable alternatives.

In Barcelona, Spain, activists and campaigners from Fundació Prevenció de Residus celebrated the 10th anniversary of the campaign they started “Catalonia free from plastic bags”. The event, where artists made sand sculptures of a sea free from plastics, included a collection of pictures of people preferring to use reusable alternatives.

In Zagreb, Croatia campaigners from Friends of the Earth went into the street to raise awareness of the people about problems with plastic bags​ and existing alternatives using​ a 2.5 meters large reusable bag with the quote (“Plastic bags are problem, I am the solution”​ and sharing reusable bags to people.

Campaigners from Polskie Stowarzyszenie Zero Waste put all of their efforts in many activities during the whole week. They organised a public picnic dedicated to children and their families in Warsaw. They collaborated with Eco-Polka, a local company that offered ecological education games for children. Furthermore, they creatively exploited the power of Social Networks to raise awareness among people by launching a series of “green talks” where activists and experts promoted healthy lifestyles.

In Maldonado, Uruguay, you can find Alma Verde, that is a platform for reflection and generating ideas around sustainable design. They are currently investigating different ways to integrate re-used plastic bags into furniture design. For this propose they carried out a collection campaign in several points of Maldonado, like dreamdays college and startup co-work café.

In Trinidad and Tobago, the Ministry of Planning and Development and the Environmental Management Authority staged a free canvas bag giveaway on the nation’s ‘Brian Lara Promenade’ in the capital city of Port-of-Spain. Volunteers also walked around the city handing out canvas bags to interested people and asking them to take the pledge to reduce plastic use. Members of the Public were also encouraged to personalise their bags by utilising a decorating table set up with stencils and paint for participants. 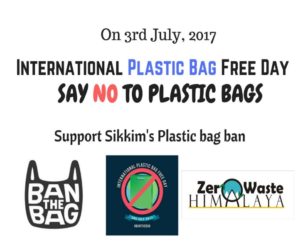 Campaigners from Zero Waste Montenegro launched a petition against plastic bags and in order to promote their activity, they took pictures of the plastic bag monster in the most scenic and touristic viewpoint of Montenegro, sharing them.

Sikkim was the first state in India to understand the long term disastrous consequences of plastic bag use and bring about a state wide ban in 1998. With the ban on plastic bags, during initial years shops turned to paper bag use. But now in recent times, this has been completely replaced by the PP (Poly-Propylene) bags which look like cloth but is in reality plastic, and just as harmful as the common plastic carry bag. Therefore, the use of this bag has watered down Sikkim’s plastic bag ban and made it ineffective. In this regard, campaigners from Sikkim are trying to bring a resolution for banning use of the Poly-Propylene (PP) carrier-bags within its jurisdiction by shops, hotels and households.

In Valencia, our talented zero waste blogger Mirabai and the owner of the organic store Flor d’Azahar gave away reusable cloth bags to the first 20 customers as a joint venture for a sustainable future. In exchange, those people autographed the campaigner’s bag as an agreement/confirmation that they will reuse their cloth bag instead of buying new plastic bags.

These actions represent only a fraction of the total activities which took place around the world calling for a ban for the bag. Considerable progress has been made over the past year by many organisations and campaigners. However, taking into account the impact of plastics on wildlife and human health the issue of plastic waste has rarely seemed more urgent. The success of Plastic Bag Free Day is central to raising awareness of this problem, and pushing for an effective ban on the non-compostable bag!