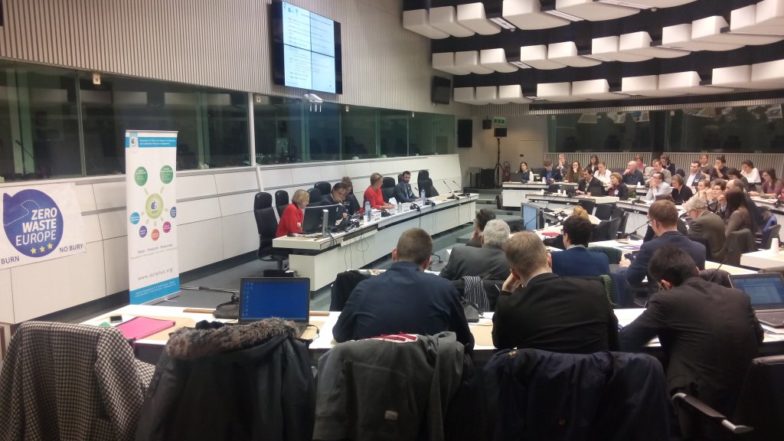 On January 12 2016, Zero Waste Europe, ACR+, and Zero Waste France held a conference; ‘The Potential of the Waste Sector to a Low Carbon Economy at the Committee of the Regions in Brussels, Belgium.

The conference focussed on the recently released report ‘Potential Contribution of Waste Management to a Low Carbon Economy‘ conducted by Eunomia, and commissioned by Zero Waste Europe in partnership with ACR+ and Zero Waste France, the report highlighted how the carbon emissions relating to waste management have been consistently underestimated due to the way in which the emissions are indexed.

The event was opened by a speech from Céline Fremault, the Brussels Capital Region Minister for Environment and Energy. Dominic Hogg, Chairman of Eunomia Research & Consulting Ltd then presented the key findings of the report.

Mariel Vilella, Associate Director and Climate Policy Programme Officer from Zero Waste Europe put the report in context following the December COP21 climate negotiations in Paris. Stating “the Paris Agreement is an opportunity to increase our ambition for climate action and the EU must take leadership”.

Philippe Micheaux Naudet of ACR+ spoke of the importance of a circular economy to the creation of a low carbon society in Europe.

Filipe Carneiro from LIPOR, the Intermunicipal Waste Management Agency of Greater Porto explained the model of the organisation which operates across 8 municipalities in Portugal and works towards the reduction of carbon emissions, avoiding the emission 248,865t CO2e over the last 8 years.

Cedric Chevalier from the Brussels Environment, Waste Department the importance of a circular economy to the creation of a low carbon society in Europe.