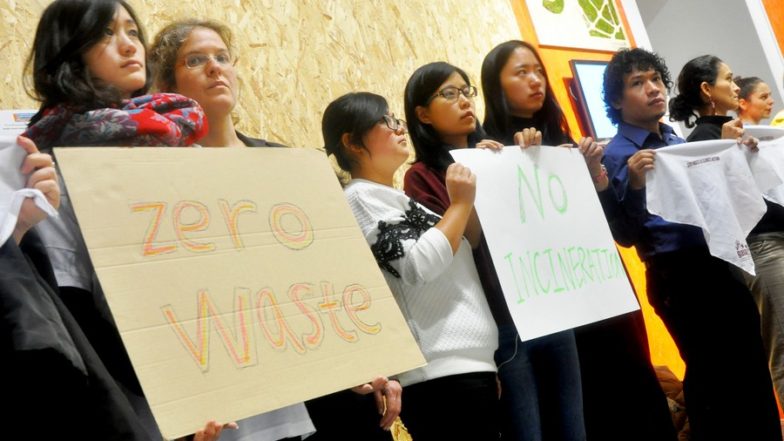 Members of Zero Waste Europe and the GAIA global network confronted incineration advocates today in the ‘Climate Generations Areas’ of the COP21 summit. The event was organised by Syctom, the agency in charge of waste management in Paris area, including the Ivry Incinerator redevelopment in Paris, which is actively opposed by local community group Collectif 3R and Zero Waste France.

Collectif 3R and Zero Waste France have created their own alternative plan, to Syctom’s €2 billion redevelopment plan, which would lock the city of Paris into 23 years of mass waste incineration, effectively preventing waste reduction

plans and higher recycling rates. The alternative, ‘Plan B’OM‘ sets out a pathway to a zero waste future free from incineration.

The case of the Ivry Incinerator in Paris was recently featured in Zero Waste Europe’s report “Air Pollution from Incineration from Waste Dispoal: Not for Public Breath” which identified 5 cases of polluting incinerators across Europe which have all faced active opposition.

The side event at the Climate Generations Areas originally planned to showcase “bioplastics” from incinerator carbon capture systems, resulted in a significant part of the audience ‘walking-out’ in opposition to their attempted greenwashing of incineration. After the third speaker, a member of the audience stood up and spoke out in French against the presentation of incineration as green technology, calling for anyone who agreed to join them in walking-out.