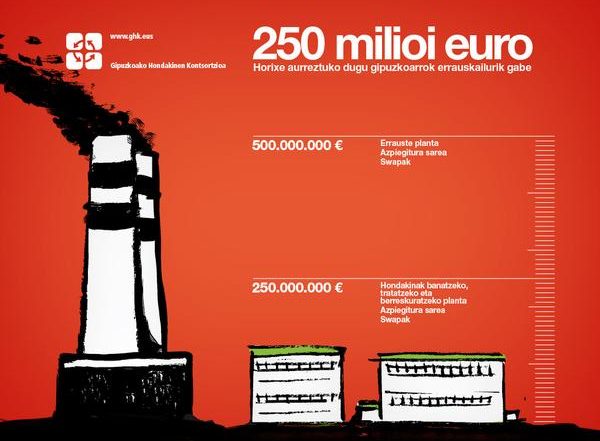 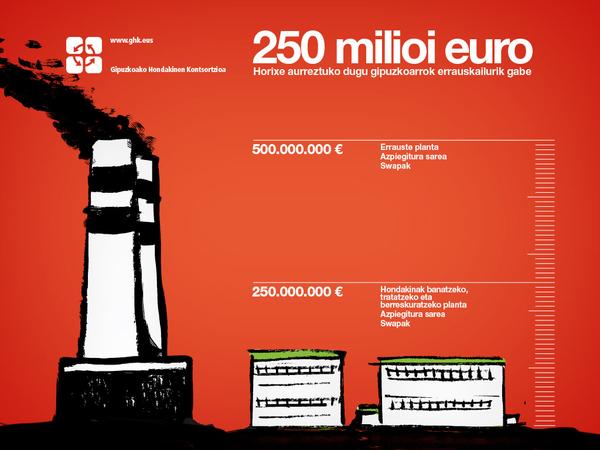 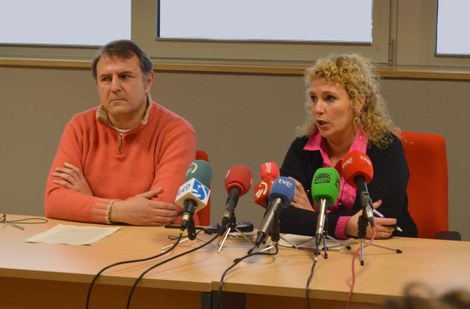 Although Gipuzkoa will have to pay the so-called SWAP, speculative products contracted by the former managers of the GHK (the Gipuzkoa Consortium for Waste Management), it will still have significant savings after stopping the construction of the incineration plant to have more recycling-oriented facilities.

After one year waiting, the Court has finally issued a judgement in the case against the SWAP. This case took to Court La Caixa and Santander (formerly Banesto) for an abusive use of the SWAP contracts. The Court decision has eventually been favourable to the banks.

This means that the province of Gipuzkoa will have to continue paying its SWAP fees, just as if it had used the loans that were requested to build the incineration plant, while it is not the case. In case the incineration had been built, these fees would have been paid too, which means that the judgement does not entail unforeseen costs.

The incineration plant had a total budget of €500 million (financial costs included). If it had been built, on top of these costs public authorities would have had to face the amortisation of the loans, a complete disaster to public finances. Such a big cost would have brought necessarily much higher costs for municipalities to treat their waste, which is hardly viable to most of them.

On the other hand, the new infrastructures projected by the Provincial Council and the Gipuzkoa Consortium for Waste Management are a comprehensive answer to waste management, as they close the loop in a sustainable, environmentally-friendly and cost-effective way. In this sense, the total cost of the new facilities –even when including the speculative SWAP products subscribed during the former term- will be €250 million, half the price of the incineration plant alone, proposed during the last political term. Gipuzkoa will therefore save €250 million by scrapping the construction of the incineration plant and building facilities to recycle and compost municipal waste.

Carlos Ormazabal (Basque Nationalist Party) and Denis Itxaso (Socialist Party), former President and Vice-President of GHK respectively, admitted on a public hearing in front of the Committee on technical solutions of GHK that the incineration plant that they projected was oversized. This means that, if it had been built, the plant would not have had enough waste to burn, and, so, any of the banks’ clauses would have applied: either (1) importing waste to incinerate, or (2) raising the waste taxes to ensure the viability of the plant. Either of these clauses should have been in force the first 20 years of the facility until the end of the depreciation of the capital.

A remodelling of the plant was impossible, as according to law, projects may only be modified up to 10%, while the adaptation to Gipuzkoa’s needs required a 35% reduction of the project. Consequently, stopping the incineration plant was the right choice both from economic and environmental perspectives.

The judgement on SWAP, in contrast, makes clear the bad management of the former GHK’s board. The contract to build the incinerator was signed in 2011 when the former board was on its way out of office and when the new government was already elected. A huge financial burden was hence imposed on a community that had clearly expressed itself against this option in the streets and in the elections.

After the court ruling the Diputación de Gipuzkoa will have to pay the SWAPs that it never used but at least it managed to save 250 million euros in an investment which will have hijacked the current moves of the province towards the highest recycling rates seen in Spain.

27 November 2008: Start of the procedures and the studies to obtain funding to build up the incineration plant. These studies suggest a budget of €385 million. Financial expenditures would rise up to €115 million.

18 January 2009: the European Investment Bank expresses its willingness to fund the project, yet it warns the Gipuzkoa Consortium for Waste Management about the “political” risk of the financial operation.

1 April 2009: Signature of a contract with Price-Waterhouse-Coopers (PwC) to have legal and economic advice on incineration.

3 August 2010: Carlos Ormazabal subscribes the mandate letter with La Caixa and Banesto in order to obtain the line of credit. These two entities would provide €68 million, to be added to the €195 million of the European Investment Bank and the €122 million of the Provincial Council of Gipuzkoa

24 January 2011: La Caixa does a Test of Convenience to Carlos Ormazabal (former President of GHK), so as to evaluate whether the SWAP product fit the needs of the client. La Caixa states in its report “the product is not suitable to the you, provided the lack of knowledge and experience needed to understand and evaluate the risks and the consequences of this product”. La Caixa places Ormazabal under the “retailer” category. Referring to this precise product, the Markets in Financial Instruments Directive states that in case the results of the Test of Convenience were negative, the product could not be recommended to the client.

3 February 2011: Approval of all the funding contracts of the incineration plant, except for those for the SWAP that did not go to the GHK’s board.

9 February 2011: La Caixa re-evaluates Carlos Ormazabal from “retailer” to “professional” through the signature of the “Request of change of MiFID category” made by Ormazabal himself.

11 February 2011: Signature of the SWAP transaction with Banesto and La Caixa by the President of GHK Carlos Ormazabal.

22 May 2011: Elections to the General Council of the Basque Country leading to a change of government at the Provincial Council of Gipuzkoa.

30 June 2011: Beginning of the liquidation of the SWAP fees by Banesto and La Caixa to GHK. From that day onwards, the fees had risen €14 million.

13 October 2011: At his last board meeting, Carlos Ormazabal the Final Project to build the incineration plant is approved, 7 days before changing the board of GHK. If this has not taken place, the contract could have been terminated without any compensation. Besides, the termination of the SWAP contracts would have been far easier and cheaper. This decision was taken against the clear order of the already in power provincial Councillor for the Environment Juan Carlos Alduntzin.

September 2012: Request of the current managers of GHK to the banks to adjust the liquidations of the SWAP fees to the part of the line of credit provided but unamortised (€9.7 million).

29 November 2012: GHK notifies to Banesto and La Caixa that they are not allowed to keep cashing the SWAP fees on a loan that is not being used. However, both entities ignore the request and keep cashing the entire fees on the bank accounts.

31 May 2013: Assertion of a claim of GHK against Banesto and La Caixa for unjust interpretation of the SWAP and against Price-Waterhouse-Cooper for negligent advice to GHK.

10 June 2013: Admission to procedure of the claim of the current managers of GHK.

26 February 2014: Beginning of the oral procedure against Banesto, La Caixa Price-Waterhouse-Coopers, for unjust interpretation of the SWAP and negligent advice.

14 January 2015: The judge of chamber nr.4 of the Lower Court of Donostia rules in favour of the interests of the banks.

To learn more about the story in Gipuzkoa see this video.