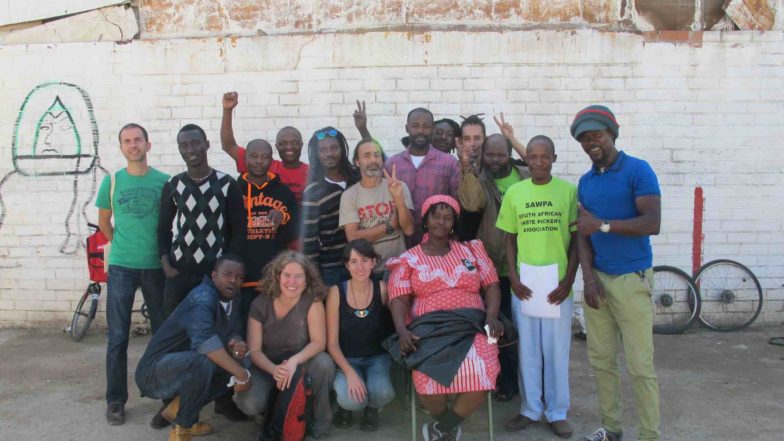 South African Waste Pickers are amongst those organized communities that have turned the tide of their role in the waste management systems.

Since the creation of their national organization SAWPA – the South African Waste Pickers Association with the support of groundWork in 2009, their empowerment as the de facto recycling system in South Africa has reached important political milestones and it keeps expanding. Their latest step: undertaking a Zero Waste Tour in Europe to learn about organic waste treatment, visiting the Zero Waste Best Practices in Gipuzkoa (Basque Country, Spain) and sharing their story of collective organizing with the informal recyclers in Barcelona.

Management of organics, a key pillar for zero waste success

The Zero Waste Tour started in Donosti with the International Training Course on Organics Management, which addressed the management of the organic fractions of waste, including collection and treatment. It also included a site-visit to the door-to-door collection system of Hernani and a composting facility plant. As it was pointed out by one of the trainees Enzo Favoino, Chair of the Zero Waste Europe Scientific Committee, specific collection and treatment of biowaste is a must to move towards zero waste.

“With recycling of packaging we only go halfway”, Favoino argued. Biowaste still makes a significant part of the total municipal solid waste and therefore ambitious zero waste plans cannot be reached by collecting and treating only dry waste. “SAWPA supports a zero waste approach as it creates jobs, saves public money, and it combats climate change”, said Simon Mbata, national spokesperson for SAWPA. “Organic waste is a critical waste stream within a zero waste approach but it’s not included in the South Africa’s Waste Act (2008), so coming to this training it’s been really useful to start developing organic waste strategies back home,” he added.

Moving on to Catalonia, one of the most striking activities of the Zero Waste Tour was the meeting with the local waste pickers in Barcelona, most of them involved in the Cal Africa Moving cooperative. This was the first time that an international delegation of waste pickers visited Barcelona and so it was a key opportunity to exchange notes on working conditions and strategies for collective organizing to improve and demand recognition for their valuable work. Together with researchers from Institut de Ciència i Tecnologia Ambientals (ICTA), Research & Degrowth, Zero Waste Europe and GAIA, representatives from SAWPA and Cal Africa Moving joined for a whole day of strategy talks culminating in the public event “Informal recycling: ecological alternatives and socials rights” that opened up the debate in Barcelona about the inclusion of recyclers in the waste management system in the city.

Those conversations stressed the need to recognise the environmental and social contribution of recyclers to resource recovery and job creation. They collect, sort, clean and in some cases, process the recyclables, returning them to industry as an inexpensive and low-carbon raw material. Essentially, their work represents a huge opportunity to save resources and reduce GHG emissions through increased recycling rates, if given the proper recognition and support.

Precisely, one of the obstacles for the expansion of recyclers’ activities that were discussed in the meeting was the role of the intermediate positions in the trade channels of resources (commonly known as the ‘middle men’), which in Barcelona corresponds to some enterprises that maintain a privileged position over the street waste pickers and the scrap market. Moreover, for many recyclers in Barcelona, this obstacle is aggravated by their migrant situation and lack of resident or working permit, running the risk to be detained and deported.

“In South Africa we have received many brothers and sisters from our neighbouring countries and we have welcomed everyone in our organization, which in turn it’s linked to many other waste pickers cooperatives around the world,” said Simon Mbata. “Our Global Alliance of Waste Pickers is a key space to strengthen the international coordination and solidarity amongst waste pickers”, he added.

The public event celebrated in Can Batlló was a chance to bring these conversations on to the open space, giving a chance to bring forward many interested suggestions such as generating a census of recyclers in Barcelona and providing identity cards to enable their formalisation. The Fundació Catalana per a la Prevenció de Residus i Consum pointed out the challenge posed by the recycling of e-waste and the need for quality standards to improve the recyclability of products. Other participants lamented that the administration has implemented an extremely expensive waste management system, considering the low recycling rates in the city, and the consumer misinformation that hinders recycling at source and other good practices. Ultimately, there seemed to be much support to integrate the informal recycling into the formal system and take that as an opportunity to re-evaluate and transform the way of handling waste in Barcelona.

Last but not least, SAWPA met with a Barcelona City Council-led working group that is coordinating the start-up of a cooperative of recyclers in the city. Apart from learning the details of the project, it was a useful chance to exchange experiences and local knowledge. On the basis of their experience in the field, SAWPA warned about the potential division amongst communities of waste pickers if the new cooperative would not involve all of them and suggested the direct inclusion of waste pickers in all the phases of development of the project. On this point, SAWPA and Zero Waste Europe agreed it’s fundamental to create a working group with all the relevant stakeholders that can accompany this process.

All in all, it was a very productive and fruitful week, taking another step forward towards the transformation of our society with more inclusive, sustainable, toxic-free and resource-efficient waste management systems.