When waste ends up in a…cement kiln 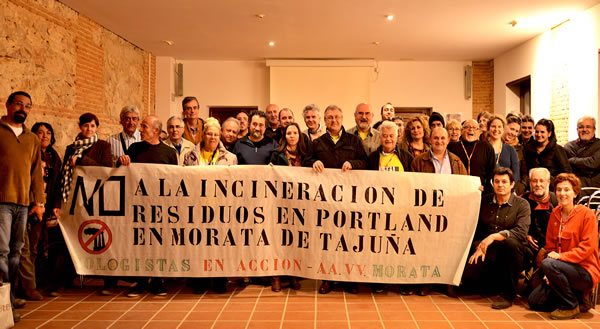 Waste incineration in cement kilns is a widespread reality in Spain that is causing major distress to local communities.

Waste incineration in cement kilns is a widespread reality in Spain that is causing major distress to local communities, as it’s been one more time confirmed in the 5th gathering of the Spanish Network Against Incineration in Cement Kilns, celebrated on 7-9 March in Morata de Tajuña, Spain.

The Spanish Network Against Incineration in Cement Kilns was created in 2010 in Ponferrada and brings together local networks from around the country that are campaigning against this polluting practice.  “During these last years we have seen the spread of waste incineration in cement kilns all over Spain, always helped with the complicity of the central Government, the Department of Environment in many of the Autonomous Communities and municipalities”, said Lorenzo Mora from the Asociación de Vecinos de Morata de Tajuña, the local organizers.

“Cement kilns are currently burning municipal waste, used tires, bone meal, etc, which has severe consequences for public health and destroys limited natural resources which should be saved, recycled or reused, according to current Spanish and European legislation” said Carlos Arribas from Ecologistas en Acción – Valencia in his intervention.

Carlos is a Physics professor that has been working on waste issues for more than 25 years. He provided an update on the new legislative framework for cement production in Spain, which will require cement kilns to revise their practices and adapt them to the new legal requirements to obtain permits. Amongst other measure, this will involve ensuring that they don’t burn waste that could be reused or recycled. “Cement plants will now be required to tell exactly what it’s being burnt in their kilns. We should all request this information and make sure we call out any legal gap”, said Carlos.

Waste incineration in cement kilns has been found to be a source of major carcinogenic emissions, as recently pointed out in peer-reviewed research conducted by Universidad Carlos III. On this regard, Dr. Pilar Muñoz Calero of Fundación Alborada, working on the field of environmental medicine to help people affected by environmental pollution, raised the close relationship between pollution and its health effects.

“Doctors have an ethical duty to engage and actively participate in prevention of illness,” said Dr. Muñoz. “I have people that have been through 30-40 doctors and systematically just been given pills when in fact are dealing with a massive level of contamination in their bodies.” Dr. Muñoz alerted that the cases of child cancer, as well as respiratory problems and asthma are increasing at alarming rates.

Levels of contamination of heavy metals, dioxins and furans, have reportedly increased since the cement plant in Morata de Tajuña started burning Refused-Derived Fuel (mixed waste) and used tyres. In a report published by the town’s Council, the level of cadmium and nickel had increased by 3’57%, other nine heavy metals had risen to 15’49%, and the levels of dioxins and furans had reached a 729’54% higher.

“Cement companies claim that there is no alternative for the waste they burn in their kilns, but we all know this is false”, said Mariel Vilella from Zero Waste Europe/GAIA, the international network promoting zero waste solutions. Vilella talked about the very positive results of Zero Waste experiences in Guipuzkoa, Italy and other places around the world where the generation of residual waste has radically decreased after implementing separate collection at source and waste prevention policies.

“Unfortunately, the production and burning of Refuse-Derived Fuel is increasing and posing an obstacle to develop zero waste strategies further. This is not helping the development of a resource-efficient Europe, but rather locks us in a wasteful society”, said Vilella. 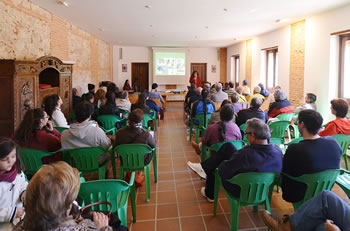 The gathering concluded with an open strategy meeting to discuss proposals for the next year. Projects approved included the production of a report tracking down the greenhouse gas emissions allocations to cement kilns within the EU Emissions Trading System; the elaboration and circulation of a statement against waste incineration in cement kilns to be signed-on by political parties, and giving support to Zero Waste alternatives throughout Spain.

Burning municipal waste that can be recycled or composted in incinerators or cement kilns is a ruinous project from an energetic, economic and health viewpoint. Burning waste which cannot be recycled doesn’t help to redesign or prevent that waste in the future.

Why do it then? The Zero Waste alternative presented in Morata de Tajuña to demonstrated that there are feasible, cheaper and way healthier alternatives to waste incineration in cement kilns.

It is time to stop wasting resources and damaging people’s health.“Doctors have an ethical duty to engage and actively participate in prevention of illness.”