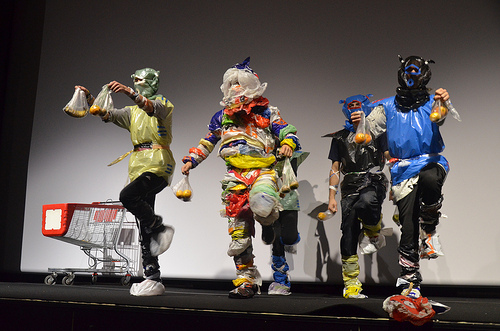 600 people turned up to watch the movie Trashed last Monday 21st of October in Ljubljana and many stayed to follow the first round table discussion about Zero Waste and Slovenia. It was a great success and a big attendance to what is the beginning of the Zero Waste movement in Slovenia.

Slovenia is the EU country that has seen most progress in waste management in the last years; without being locked by incineration capacity and by constantly reducing landfilling is currently recycling more than 35% of its waste. Moreover, with the implementation of door-to-door separate collection in cities such as Ljubljana and by spreading the source separation of organic waste we should be seeing composting rates go up in the next years. The town of Vrhinka is the best performer in the country and recycles 80% of its waste!

The cherry on the cake is that Slovenia is managing to keep low rates of waste generation with its capital Ljubljana averaging less than 350kg of waste generated by inhabitant, 200kg under the European average. All in all, if it continues in this virtuous path Slovenia is likely to become the EU’s frontrunner in the next years.

However, the path towards Zero Waste will not be an easy ride. Despite the progress made in the last years partly thanks to the flexibility of not having big infrastructures pushing down recycling there have been threats to build incinerators in the country. Luckily it looks like the EU will not use cohesion funds to co-finance the incinerator which will allow growing recycling and composting rates and innovation in the prevention side.

Also, despite good initiatives in the field of home-composting and separate collection of organic waste since its roll-out in 2012 it remains to be seen how the rates will continue to increase. Finally, the application of Extended Producer Responsibility in the country still poses many challenges because the producers refuse to pay for 100% of the collection of the waste they put in the market. However, seeing the interest and passion of the attendants to the screening and the debate one should trust that these challenges will be overtaken soon.

EU Commissioner for the Environment, Janez Potocnik addressed the audience after the movie with a recorded message and opened the debate that followed. In this debate participated Dr. Andrej Kržan, from the National Institute of Chemistry; Janko Kramžar, Director of Snaga, Ljubljana’s municipal waste management company; Uroš Macerl, president of the NGO Eko Krog (Eco Circle) and Joan Marc Simon, Executive Director of Zero Waste Europe. In the audience there were many people from civil society but also entrepreneurs and progressive waste and social companies which show that many see the economic opportunities that will open if Slovenia decides to walk the Zero Waste path.

Following the example of Zero Waste initiatives in other parts of Europe the organisers, Ecologists without Borders, will now create a platform where policy makers, civil society, NGOs, green companies and waste management sector can work together to phase waste out of the system.

To see the pics of the event click here.