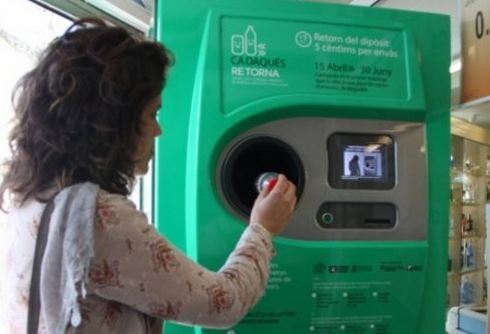 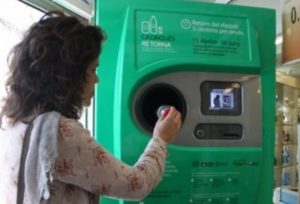 When waste has a value littering disappears and recycling skyrockets. This is in a nutshell what the deposit system for packaging waste is about; one pays a deposit when buying the drink that will refunded when the used packaging is brought back to the store.

Cadaqués, the municipality where universal artist Salvador Dalí lived and worked, is the first municipality in Spain to try a Deposit System for packaging waste. The Catalan Zero Waste strategy is the platform from which the Retorna Foundation and the Fundació Catalana per la Prevenció i el Consum Responsable launch this initiative.

Between 15 April and 30 June, the Catalan town will be using a Deposit and Return System (DRS) pilot project for beverage containers.

Cans and plastic bottles of less than three litres of soda, water, juice and beer will have a five-cent deposit which will be refunded when the package is returned at any of the 10 partner establishments.

The pilot project opens a way to prevent the elimination in landfill, incineration or littering of 5.5 million beverage containers, out of the 9 million which are consumed every day in the Spanish region of Catalonia.

The aim of the project is demonstrating the feasibility of a recycling option that already works successfully in more than 40 countries and regions worldwide and will coexist with the current system of roadside containers which has shown its clear limitations to recycle packaging.

Why this pilot experience?

The current system of Extended Producer Responsibility for packaging in Spain is based on an extreme interpretation of the European Packaging Directive. Whereas in this directive it is adviced to implement a deposit system for packaging –and countries such as Germany, Sweden, Finland or Estonia already do it-, Spain decided to turn the exception into the rule and pass a law in which the packaging producer is not anymore responsible for the waste they place in the market but only of the waste that is separately collected. The result is a system that only collects 35% of beverage packaging for recycling when in Germany with the deposit system they achieve 98% collection rate.

The director of the Waste Agency of Catalonia, Josep Maria Tost, explained that the pilot project of Cadaques is aimed at finding solutions for the future. “In Cadaques, no more cans will be abandoned in the village or in the environment,” he added

Merce Girona, president of the Foundation for Waste Reduction and Responsible Consumption, said: “The pilot test comes at a perfect time now that Catalonia is planning the new General Waste Management Programme 2013-2020, which should provide new tools for waste management, such as Return Systems”.

It is surprising that a country like Spain with more than 25% unemployment and that depends so much on tourism can afford to throw most of its packaging waste to landfills and incinerators. The experiences with deposit systems prove that they are capable of creating new jobs, reduce treatment costs for each piece of packaging collected, lower the collection costs to municipalities and diminish the environmental impact. Once again, Zero Waste makes more economic, environmental and common sense than traditional business models.

The question at the end of the day is who is responsible for the waste, the European legislation and the Catalan Zero Waste network say the producer should be responsible for all waste they place in the market –and not 1/3 of it as it is today in Spain-. Hopefully this pilot project is the beginning of a new way of understanding producer responsibility in Spain.