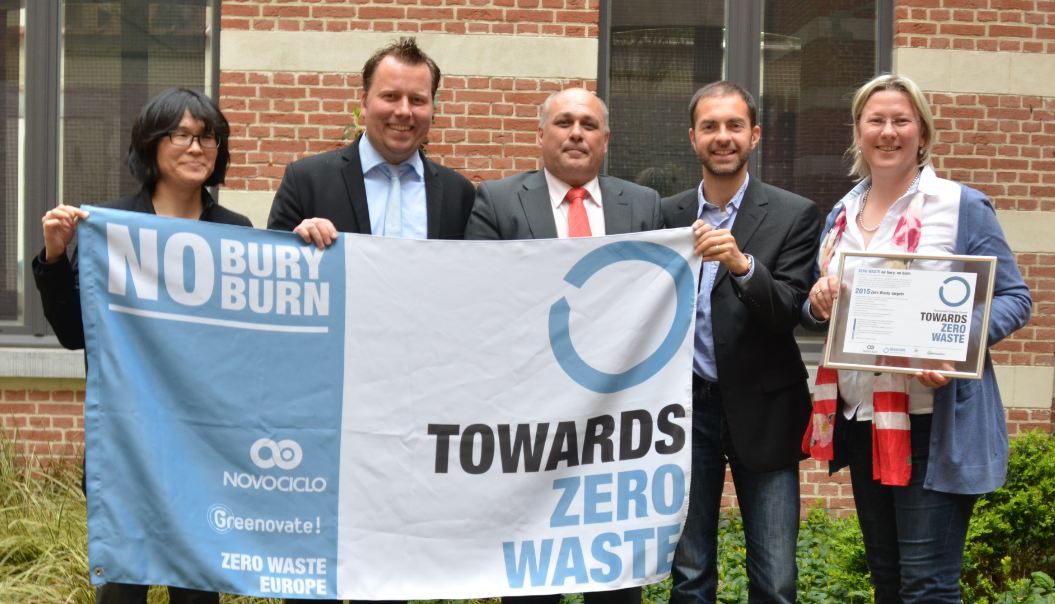 The Renewable Energy House (REH) headquarters 20 associations working in Brussels to promote renewable energies in front of the European Union. It currently houses 100 people and it preaches by example running the whole house completely on renewable energies. Now it also decided to be the first office building in Europe to go Zero Waste!

The REH knows better than anyone else that waste is, before anything else, a waste of energy.

Recycling vs producing anew from raw materials saves 95% of the energy for aluminium, 70% for paper & cardboard and 30% for glass. Going Zero Waste makes sense from the energetic point of view; the energy –and money!- savings will add to those already implemented in this office building by going renewable. Indeed, it is unlikely that in the short term renewable energies alone will be capable to solve the problems of energy supply in a world with soaring fuel prices, therefore zero waste complements perfectly the renewable energy sector for it saves vast amounts of energy  that otherwise would be required in the extraction, production, transport and disposal process.

Following a study run by Greenovate! and Novociclo[1] and after auditing waste arisings in the building, a serie of measures were proposed to increase waste diversion –waste that is not sent to disposal to the Brussels inncinerator- to 90%. Among the measures to be applied in the next 3 years will be:

As a result of this combination of measures the REH should be reducing the amount of residual waste to less than 10% by 2015 whilst reducing the total amount of waste generated and saving money and energy.

On Tuesday 24th of April, after the presentation of the study and after having agreed on the proposals and targets for 2015 the terms of commitment were signed by the President of the REH, Jan Geiss, the Secretary General of the REH, Kim Vanguers, the director of Greenovate!, Astrid Severin, the President of Novociclo, Rodrigo Sabatini and the coordinator of Zero Waste Europe, Joan Marc Simon.

The application of the Zero Waste terms of commitment are now going to be monitored on a yearly basis to make sure that the targets are met and REH can be a certified Zero Waste building by 2015.

The Press Release from REH:

“We’re looking forward to best using this innovative framework and cooperation with specialized actors for making the REH a best-practice example of a Zero Waste Office Building in Europe” said Jan Geiss, REH President and Secretary General of the European Forum for Renewable Energy Sources.

Greenovate! sprl in collaboration with Novociclo S/A, a Brazilian company specialised in Zero Waste Management, carried out an analysis of the waste generation and disposal at the Renewable Energy House. Zero Waste targets for 2015 as well as an Action Plan to achieve them were based on this analysis.[2]

To achieve the Zero Waste targets by 2015, the REH will integrate the Zero Waste principles in its management practices while raising the awareness of the 100 staff employed by the 20 associations who, interlinking under the REH roof, are the very core of the Renewable Energy House.

[1] To see the PWP presentation of the study click here.

[2] Greenovate! Climate Solutions, Belgium and Novociclo, Brazil, “Development of a Zero Waste Management Plan for the Renewable Energy House Brussels, Analysis and recommendation”, Brussels, March 2012.The REH knows better than anyone else that waste is, before anything else, a waste of energy.