Castelbuono – the town where even donkeys’ walk the Zero Waste path 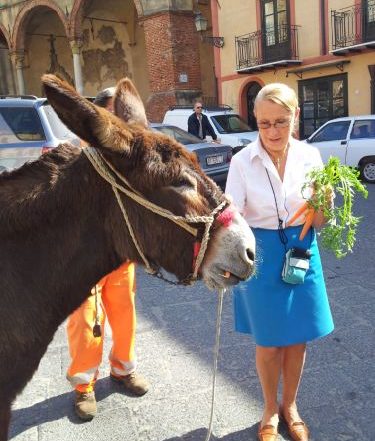 Creativity is at the core of a Zero Waste strategy. Sometimes this implies creating new processes and using innovative technologies but some other times it just requires combining the existing tools to create a low-tech win-win situation to reduce waste, create occupation, save money and increase sustainability. The example of Castelbuono is good proof of this.

Castelbuono is a Zero Waste town of 10.000hab in Sicily, Italy, which has managed to develop an innovative system to marry sustainability, social work and economics. The mayor, Mario Cicero, decided to link the recovery of a traditional donkey-breed from Sicily –called Ragusa- with the challenges of the waste collection in narrow streets and the social work to reintegrate people into society… and all of this without scaring off the big number of tourists that visit the fantastic medieval castle or buy local products of this Sicilian town.

This is how Mr Cicero decided to use the donkeys to do the door-to-door separate collection. On one hand it makes donkeys useful so that recovering this breed stops being a cost to become an asset, on the other hand it becomes a way to reintroduce socially excluded people -with mental or addiction problems- thanks to using contact with animals as a therapy –onotherapy– and finally it turns waste collection into a tourist attraction and an education tool. A win-win situation!

Mr Cicero explains how buying a small truck to collect waste costs more than 15,000eur and lasts 5 to 10 years whereas a donkey costs less than one tenth and last longer. Plus the maintenance costs of donkeys are a lot lower and they don’t need oil or electricity to run which makes them more cost efficient in a world of ever rising oil prices.

Besides, donkeys can be useful when they are not working collecting waste; on one hand their milk is considered to be the closest to human milk and hence very much valued. On the other hand onotherapy –therapy with donkeys- is proving wonders on mentally disabled people. Finally from the cultural point of view it makes cost-neutral recovering this important element of Sicilian and Mediterranean culture which is now once again participating in ceremonies and other local festivities.

It is difficult to make a cost-benefit analysis of this practice because it over-arches on different fields but the fact is that;

As a comparison; since 2008 –when the system was introduced in Castelbuono- the neighbouring municipality of Cefalú, which is following the “modern” system of waste collection with road-containers and trucks, has generated millions of euros in debts to the regional public waste company whereas Castelbuono is one of the few municipalities in the region with balanced accounts.

Moreover, the region of Sicily has spent 1,5 million euros to reintroduce the Ragusa donkey but is not doing anything with them –it is a net cost-; instead Castelbuono started with 4 and now has 45 of these donkeys which are self-financing themselves.

But even when they are collecting waste donkeys work wonders; tourists in Castelbuono appreciate this silent and gentle creatures and stop to play with them.

It is impressive to observe how neighbours in Castelbuono know the donkeys by the name and many stop to feed them when they pass by. When we visited them we accompanied one of the workers who does the tour with the donkey “Valentina”. Having had problems with depression & addiction in the past, before the introduction of donkeys he will not show up for work 5 days in a row. Since he started working with Valentina in 2008 he has not missed a single day of work and he has managed to reorganise his life. The bind between him and the animal and the daily contact with neighbours and tourists has managed to bring him back to society.

This personal story is just the top of the iceberg of a successful story of integration, education, creativity and sustainability in Castelbuono. Separate waste collection rates in this municipality are higher than in any of the neighbouring towns, they host a composting plant that treats the separately collected organics of the province and they are a proud member of the Italian network of Zero Waste municipalities. Many other ZW municipalities with similar characteristics inside and outside Sicily are studying importing this successful ZW practice.