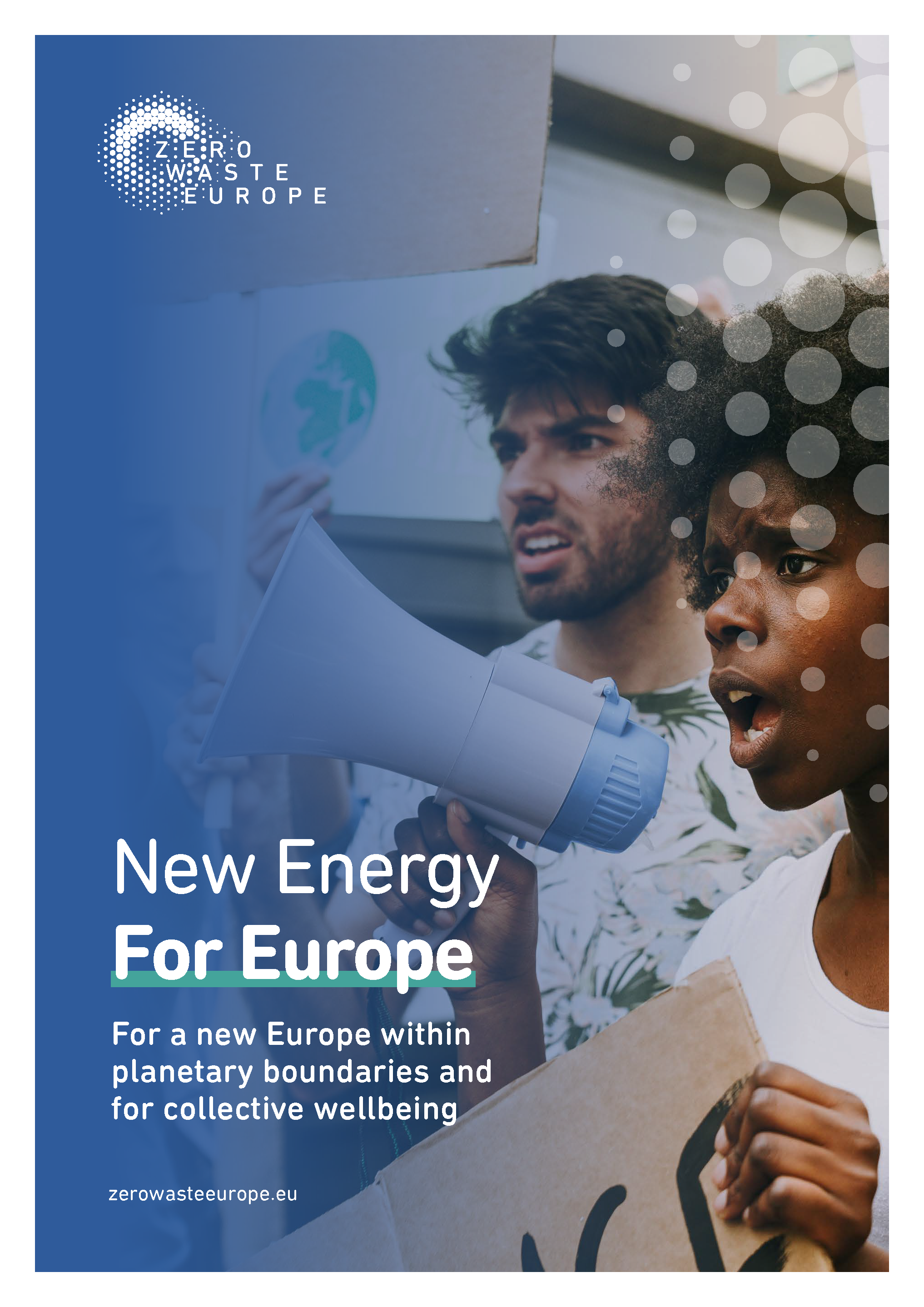 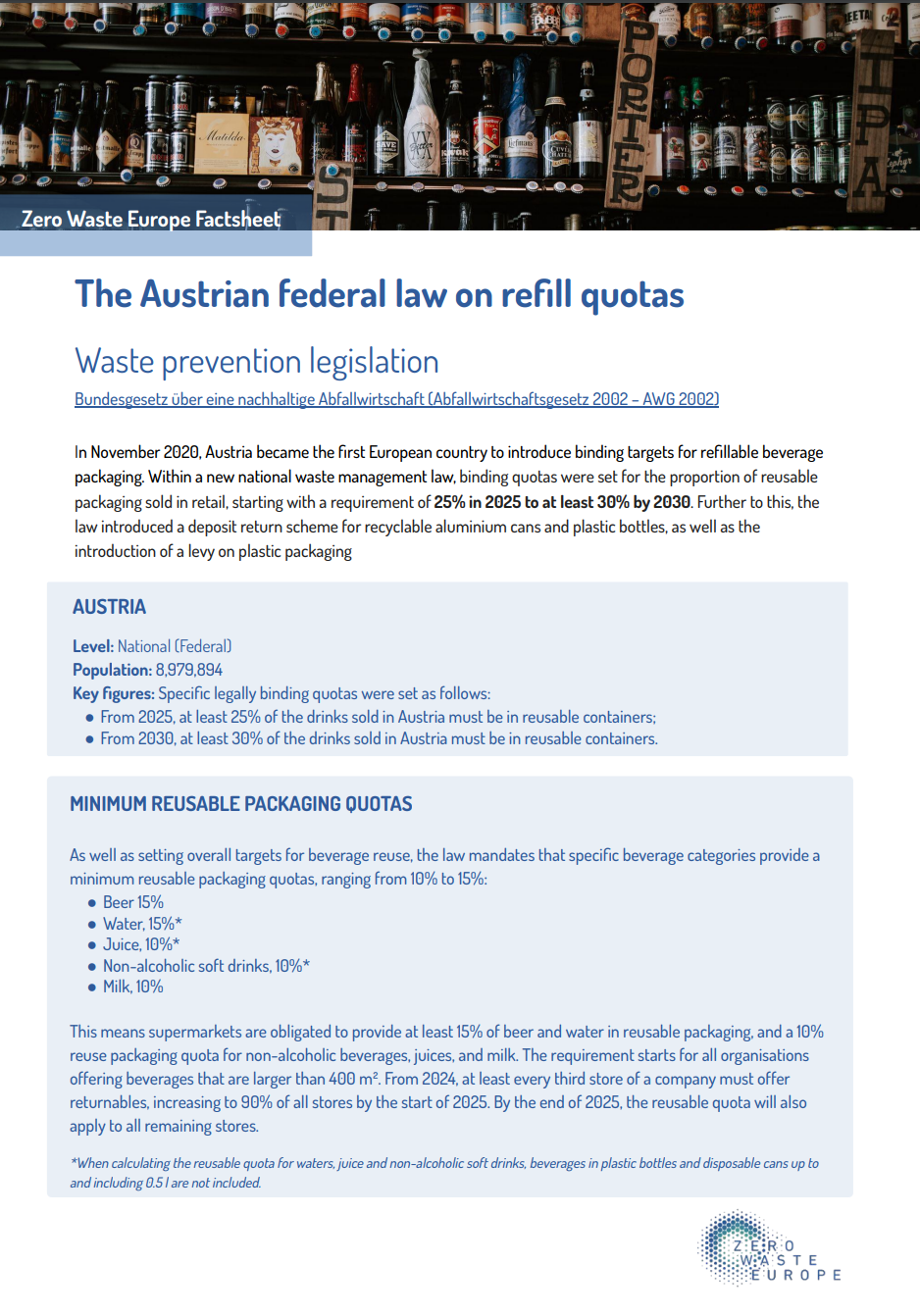 In November 2020, Austria became the first European country to introduce binding targets for refillable beverage packaging. Within a new national waste management law, binding quotas were set for the proportion of reusable packaging sold in retail, starting with a requirement of 25% in 2025 to at least 30% by 2030.

On the occasion of the European Week of Waste Reduction 2023, our factsheet takes a closer look at Austria’s inspiring work on refillable beverage packaging. 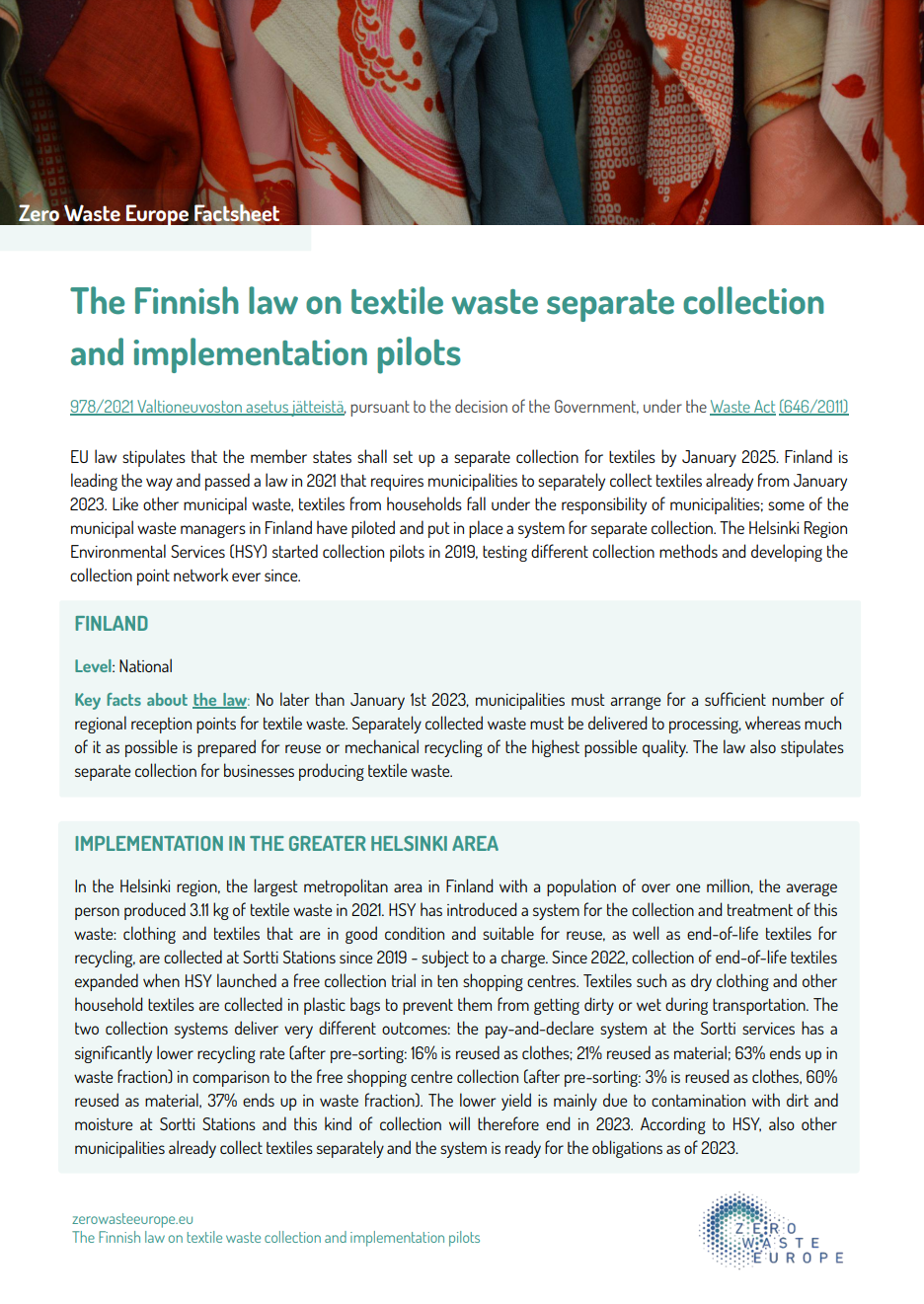 EU law stipulates that the member states shall set up a separate collection for textiles by January 2025. Finland is leading the way and passed a law in 2021 that requires municipalities to separately collect textiles already from January 2023.

On the occasion of the European Week of Waste Reduction 2023, our factsheet takes a closer look at Finland’s leading work on textile waste.

Available in English and Portuguese. 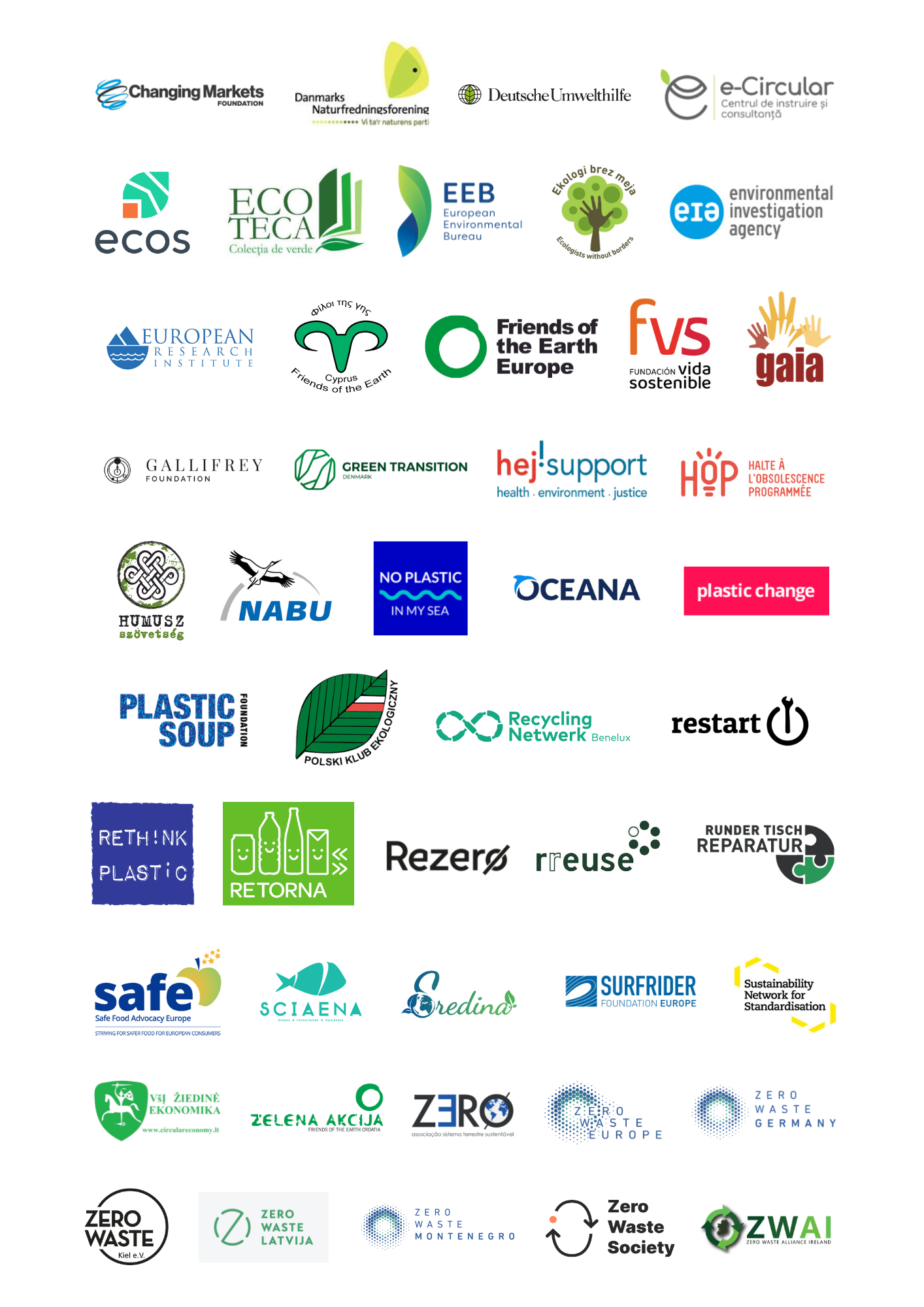 With the support of 10 Members of the European Parliament and 47 other NGOs, Zero Waste Europe has sent an open letter to EU Commissioner for Environment, Oceans and Fisheries, Virginijus Sinkevičius, calling for urgent action in order to tackle the waste crisis. In the letter, the signatories state their concerns regarding the Waste Framework Directive revision’s very limited scope. The signatories urge the Commission to adopt legally binding, European-level quantitative targets for municipal solid waste prevention. 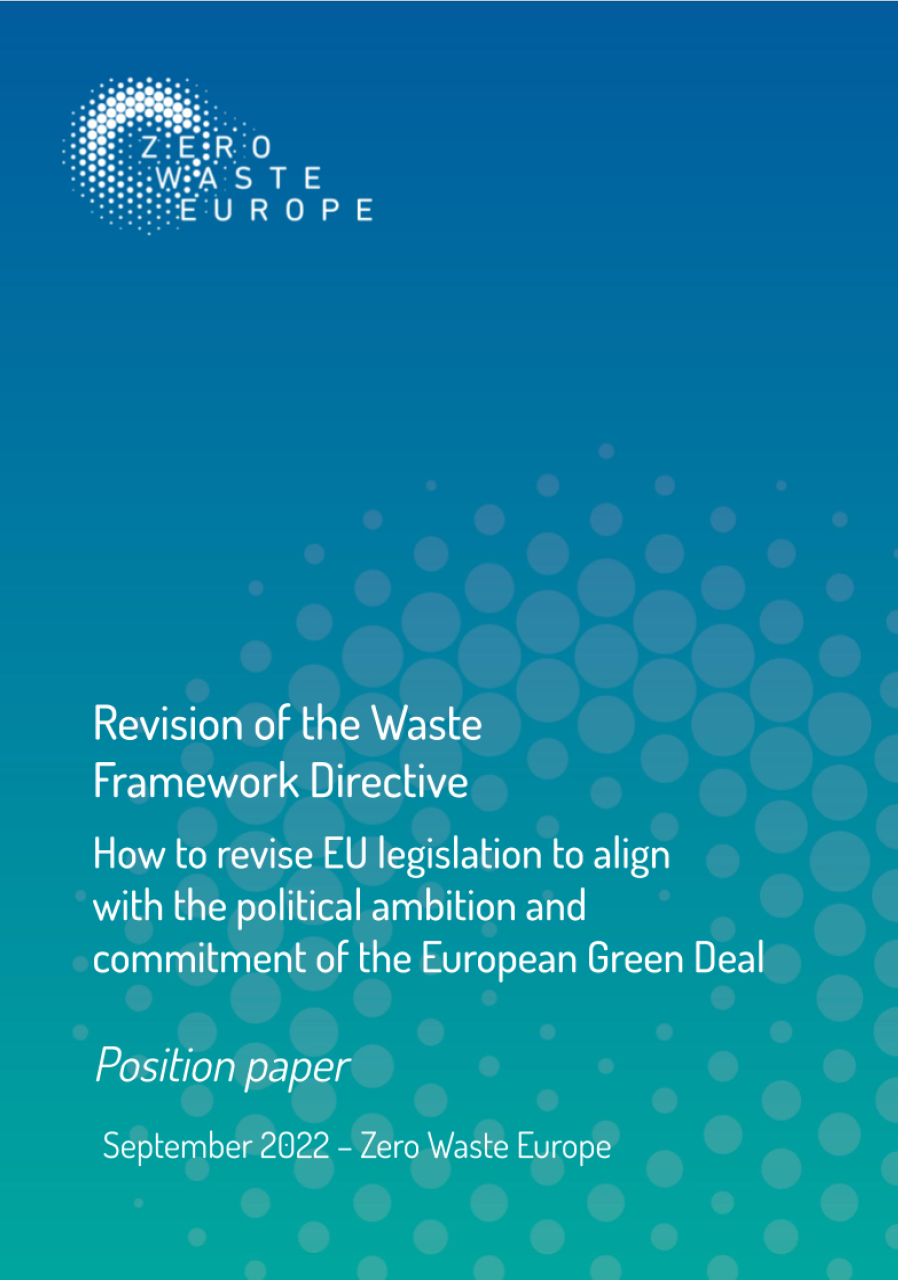 Despite the good progress in EU legislation, the linear economy continues to be the norm in Europe. Most nutrients present in our waste still end up in landfills and incinerators; prevention and reuse lack the necessary infrastructure; packaging recycling rates are low and packaging reuse is even lower; fast fashion reigns free and recycling rates of textiles are close to zero. We often trust producers to come up with the needed solutions, resulting in cost-efficiency instead of a reduction of environmental impact.

The revision of the Waste Framework Directive, therefore, comes at a key time to organise the work for the coming decades. In this position, Zero Waste Europe, calls for its three key asks to be adopted. 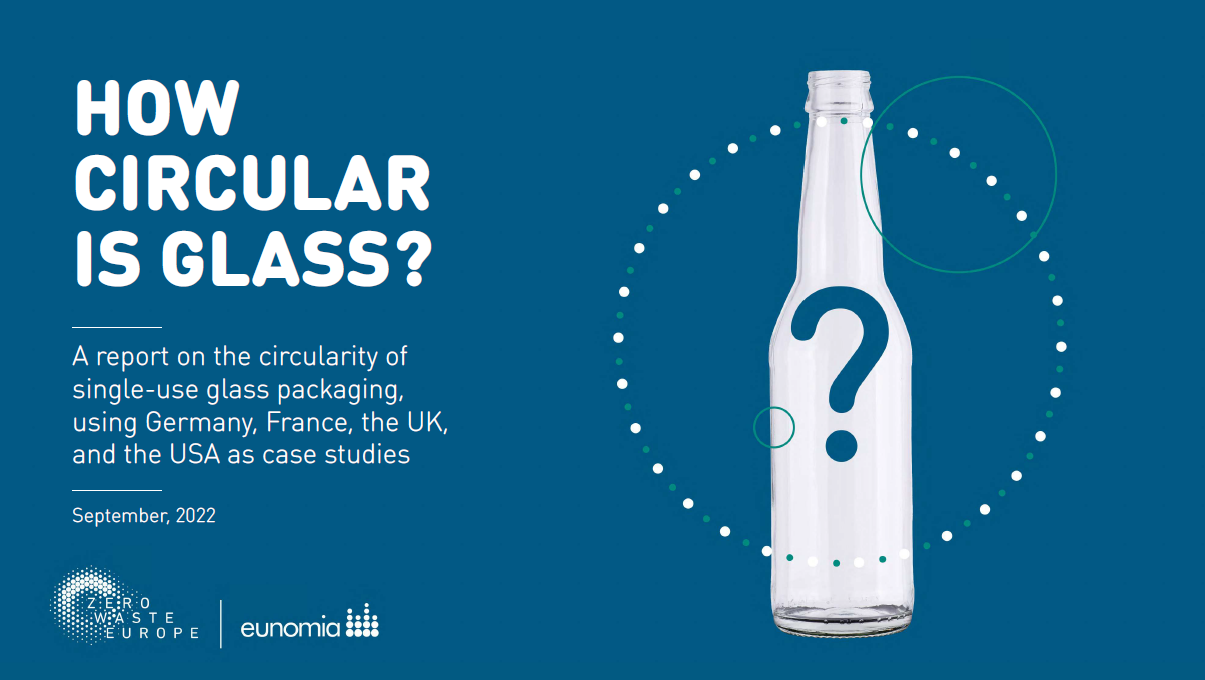 Glass production, especially from primary sources, is a high energy-consuming process. One way to effectively reduce energy consumption and greenhouse gas (GHG) emissions from the repeated production of single-use glass is to retain material in a circular system – e.g. by utilising the cullet from container glass to produce new container glass, i.e. closed-loop recycling, and thereby removing the need to use glass from primary sources.

To understand the current circularity of single-use container glass in different geographical scopes, this study examines the mass flows of single-use glass packaging in four countries: Germany, France, the United Kingdom and the United States of America. For each case study, the key limitations to circularity are discussed and the potential to improving glass circularity are explored. The study also reviews other limitations and opportunities the single-use container glass industry is facing, and future developments being considered to overcome these challenges. 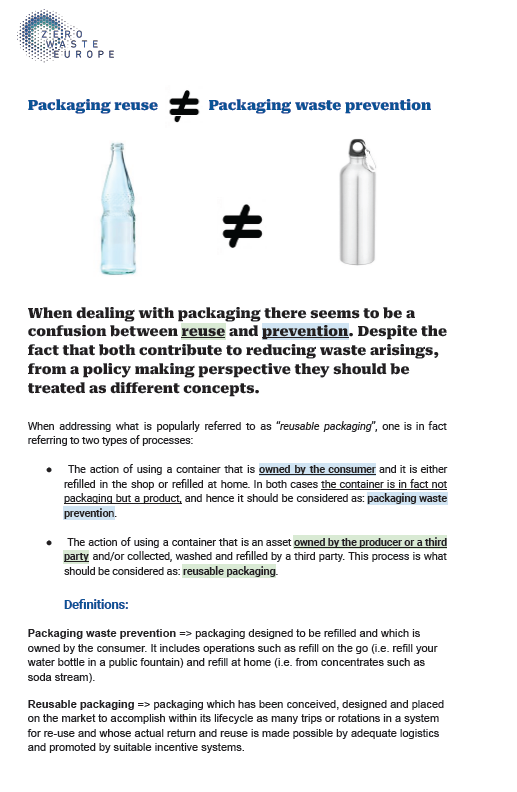 When dealing with packaging there seems to be confusion between reuse and prevention. Despite the fact that both contribute to reducing waste arisings, from a policy-making perspective they should be treated as different concepts. 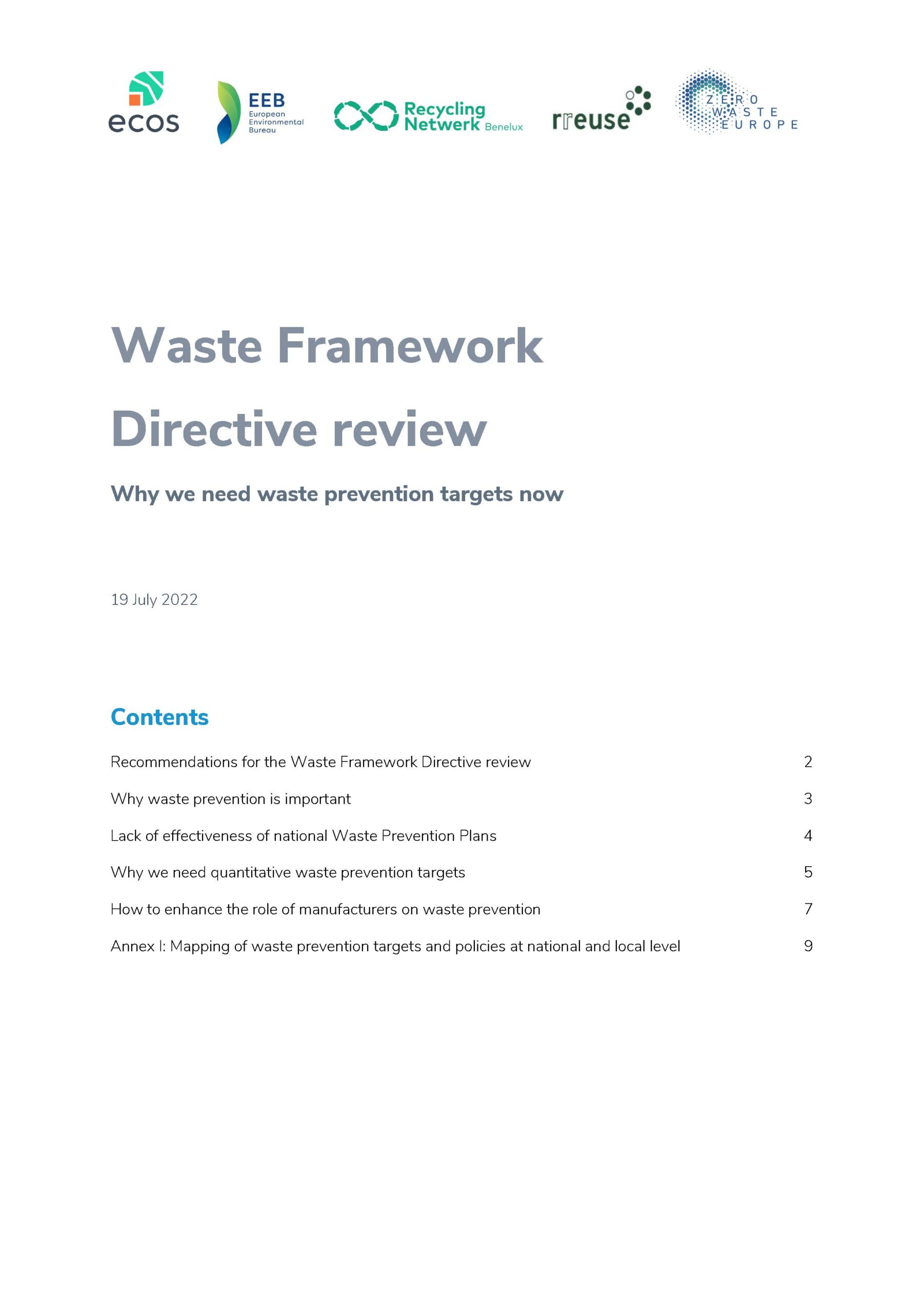 This joint paper by ECOS, the European Environmental Bureau (EEB), Recycling Netwerk Benelux (RNB), RReuse and Zero Waste Europe (ZWE) shows the lack of effectiveness of existing waste prevention policies. We need European level quantitative waste prevention targets, as well as effective national measures. This position paper also highlights manufacturers’ role in reducing resource use and the size of the circular economy loop. Lastly, it offers some clarity on the differences between waste prevention and recycling, emphasising that recycling is lower in the European waste hierarchy than prevention. 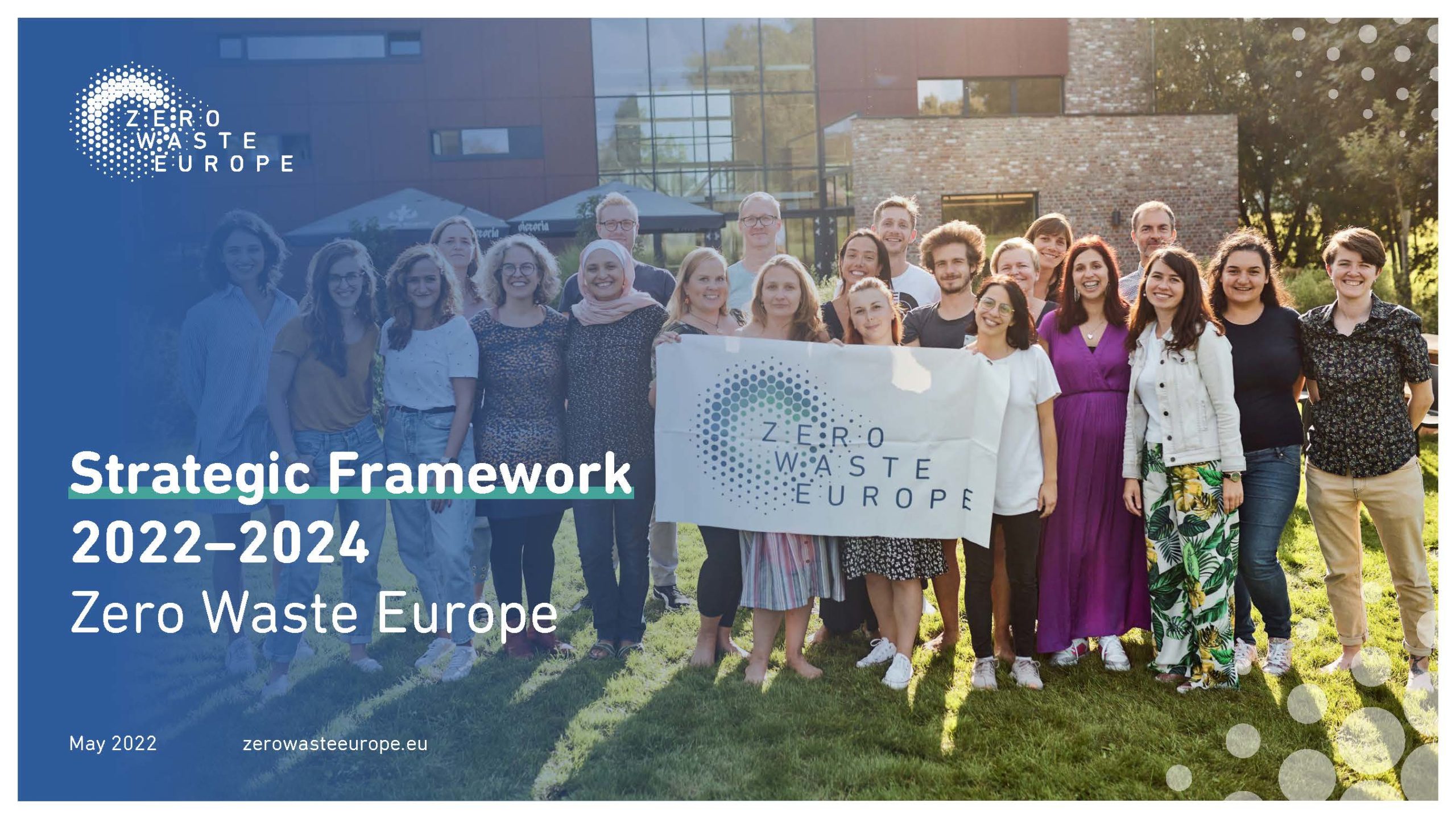 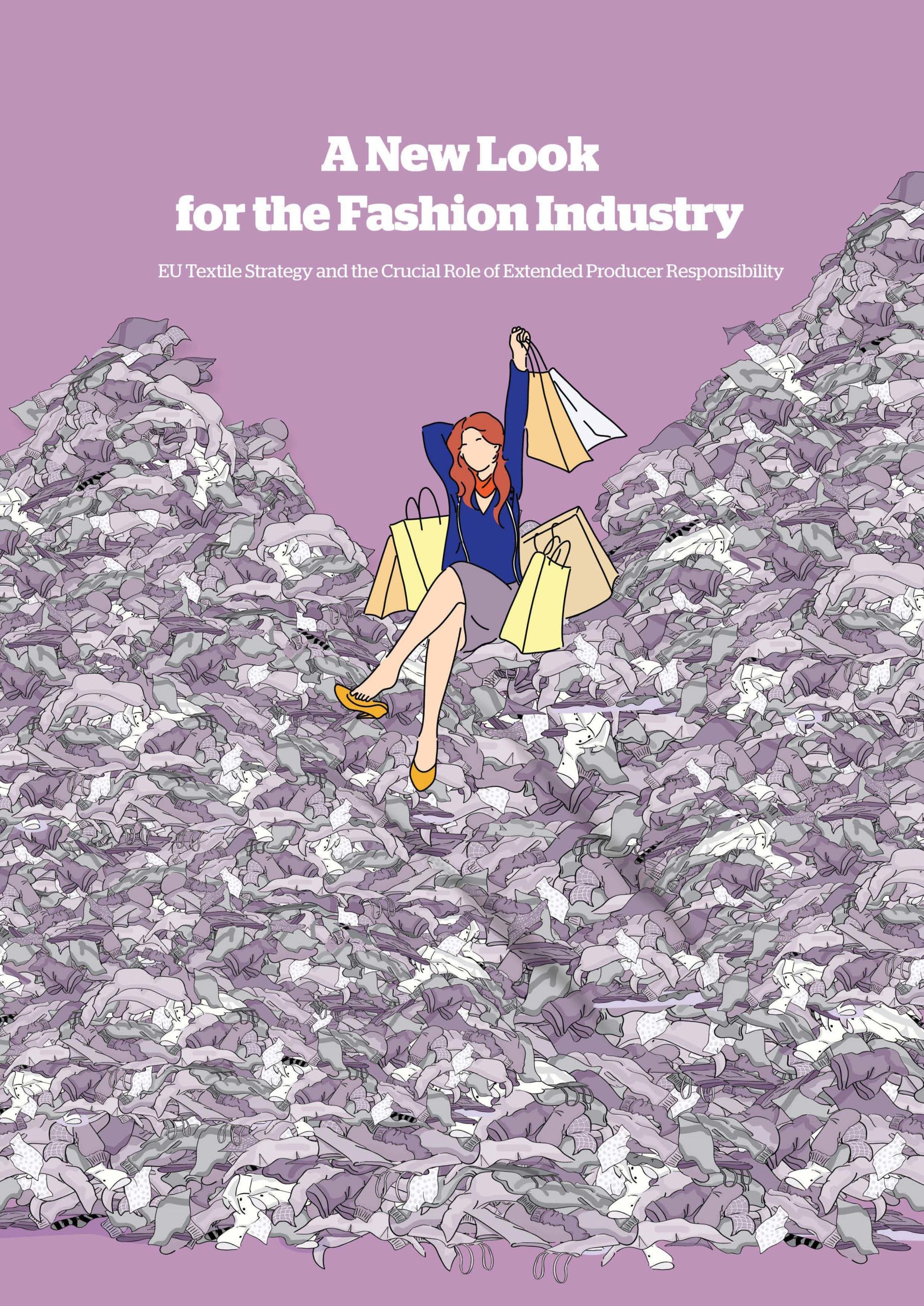 In the first half of 2022, the European Union (EU) will take the first steps in becoming a global leader in taking on an ugly problem: fast fashion and its mountains of waste.
The EU will become the first world region to target the flaws in fashion so directly, with regulations that promise to improve the circularity of textiles; stop overproduction; empower consumers to make more responsible choices; and make fashion brands accountable for their massive waste problem.
This political briefing by Changing Markets Foundation, the European Environmental Bureau, and Zero Waste Europe focuses on Extended Producer Responsibility (EPR), a powerful market-based tool that is expected to be at the centre of the European Commission’s upcoming Textiles Strategy. 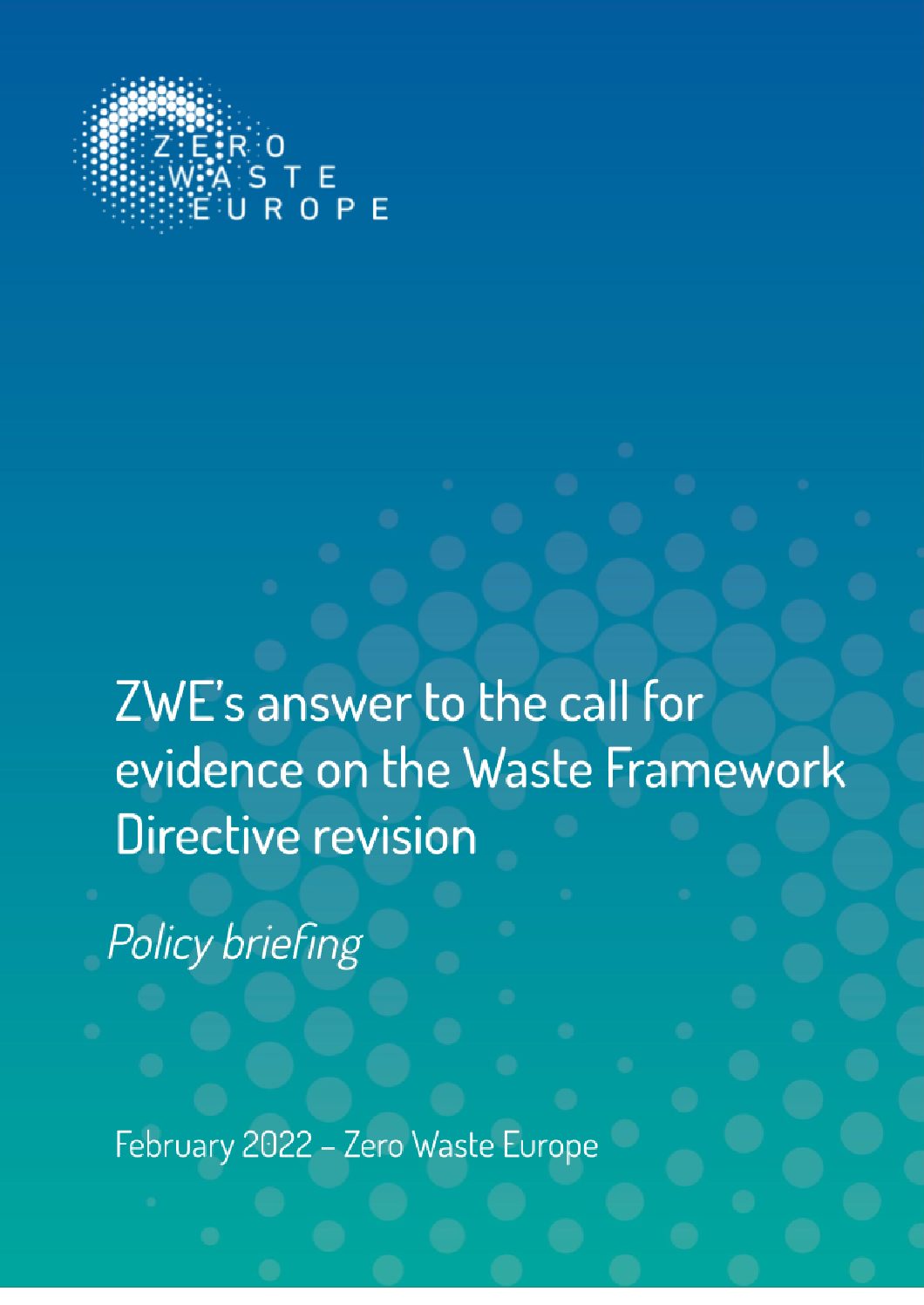 Zero Waste Europe welcomes the European Commission’s initiative to revise the Waste Framework Directive with the aim to improve the overall environmental impact of waste management in the EU. The focus on qualitatively improving the recycling system, as well as the focus on waste prevention, are of high importance as, so far, the EU efforts on the circular economy have only led to a quantitative increase in recycling. This approach has led to signiﬁcant progress, but these remain insufﬁcient with regard to the EU environmental ambitions.

Through this revision process, Zero Waste Europe hopes to see the EU complementing its existing legislation with an integrated waste prevention framework, enabling high-quality recycling and a set of concrete tools to reduce resource use and enable waste prevention on the ground. 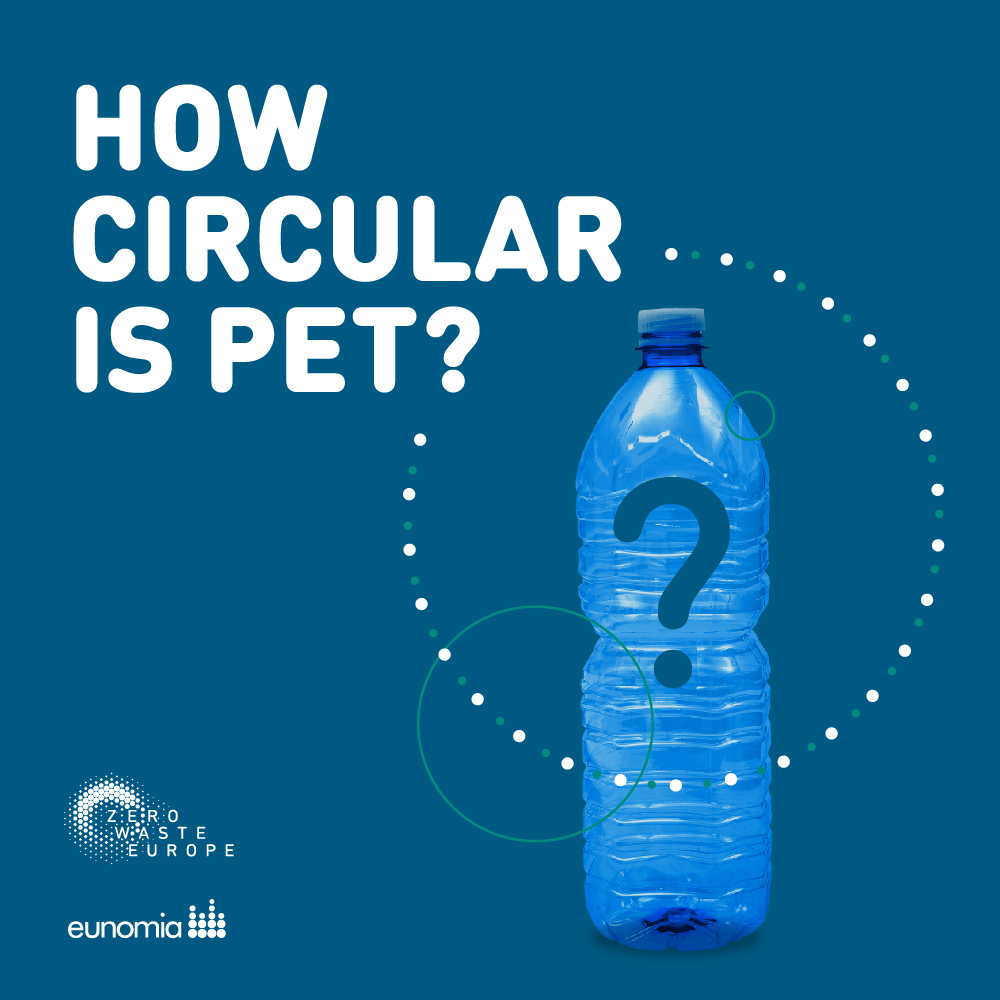 In a report commissioned to Eunomia by Zero Waste Europe, we bring you an analysis of the true state of circularity of Polyethylene terephthalate (PET) in bottles in Europe – including how much material from bottles is collected for recycling; how much of it is actually recycled; and how much of recycled PET is put into new bottles. 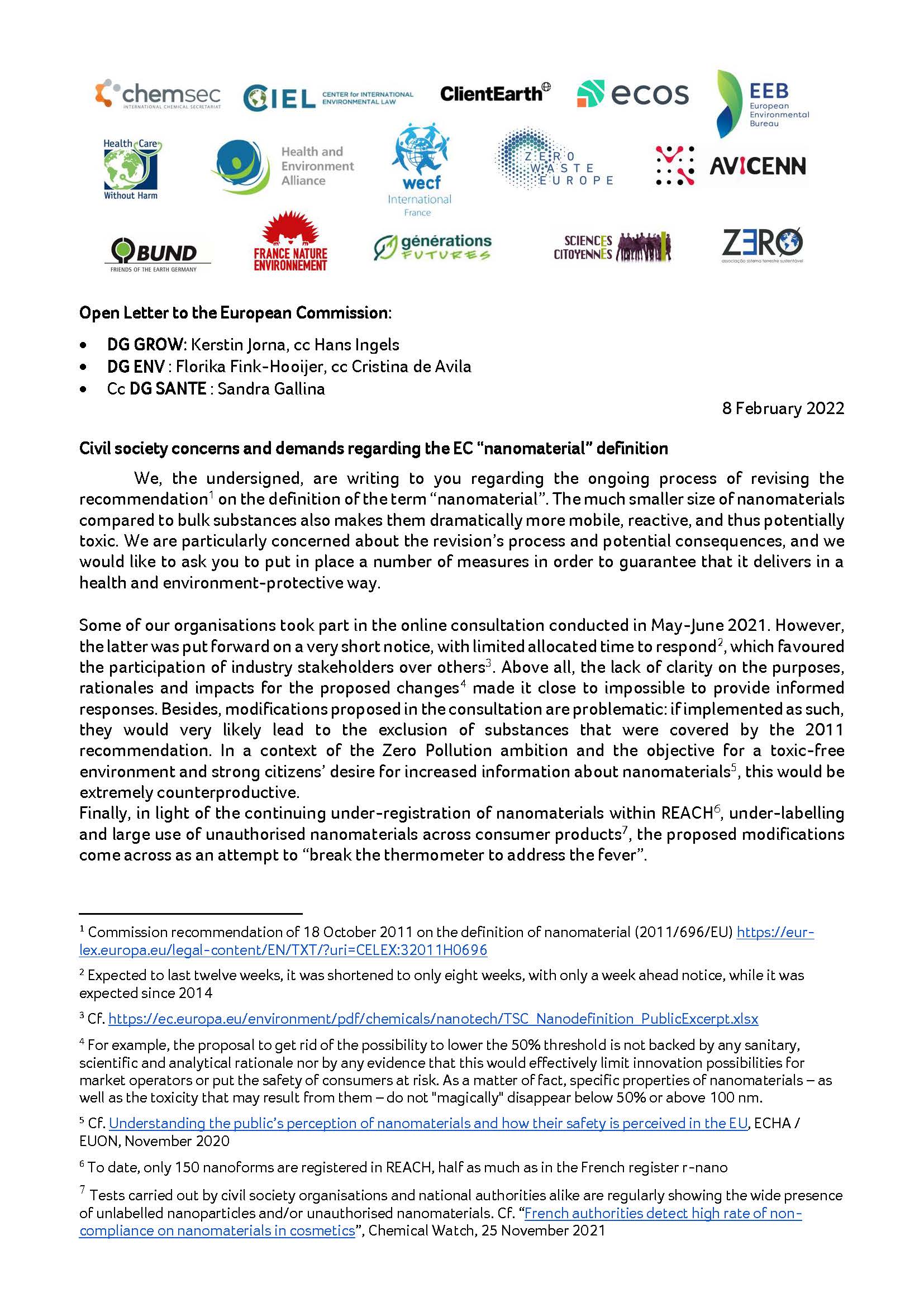 Zero Waste Europe joined 14 other organisations in calling the European Commission to properly and collectively scrutinise the ins and outs of the changes proposed (as well as those that have not been considered) to the definition of “nanomaterial”. 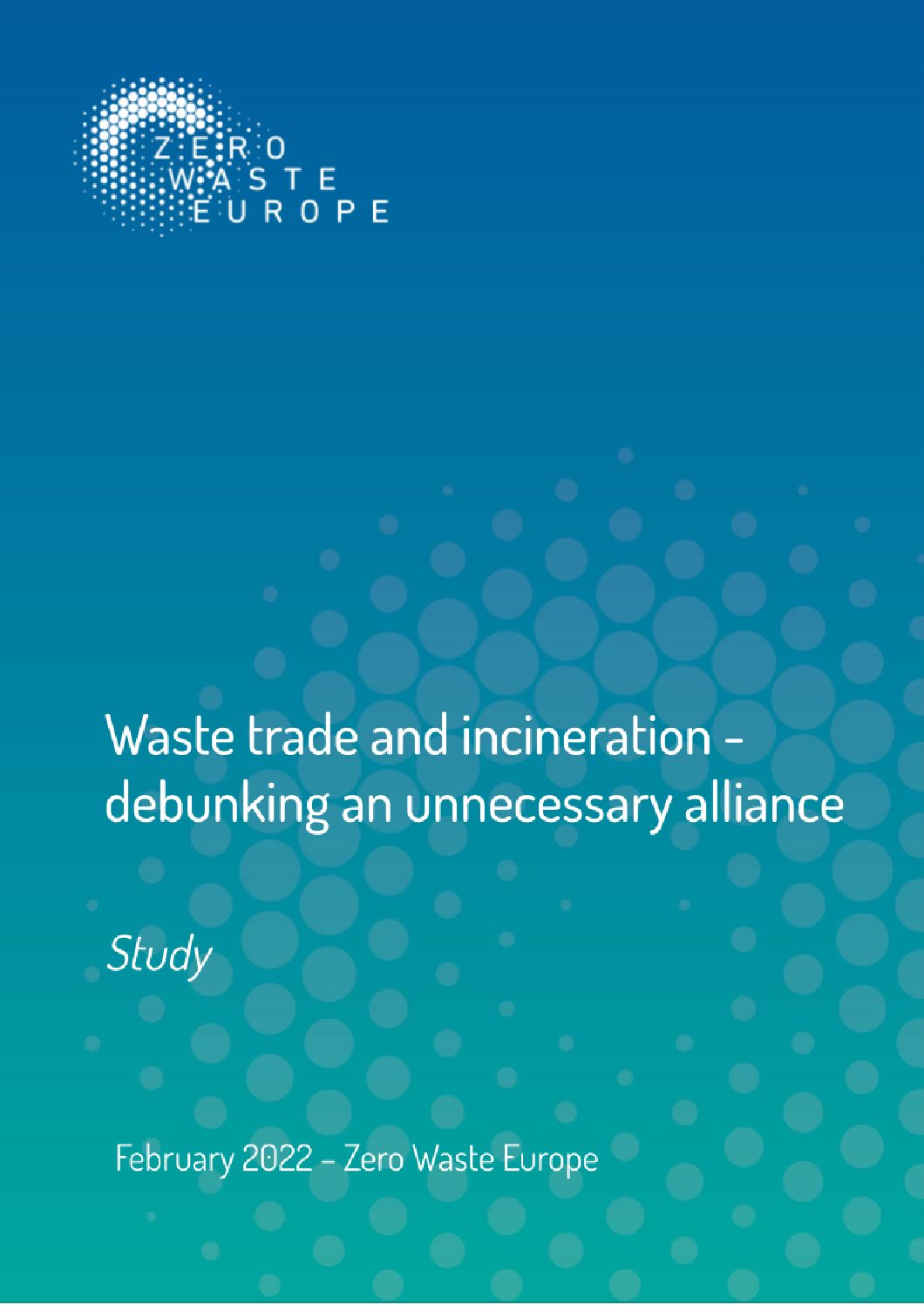 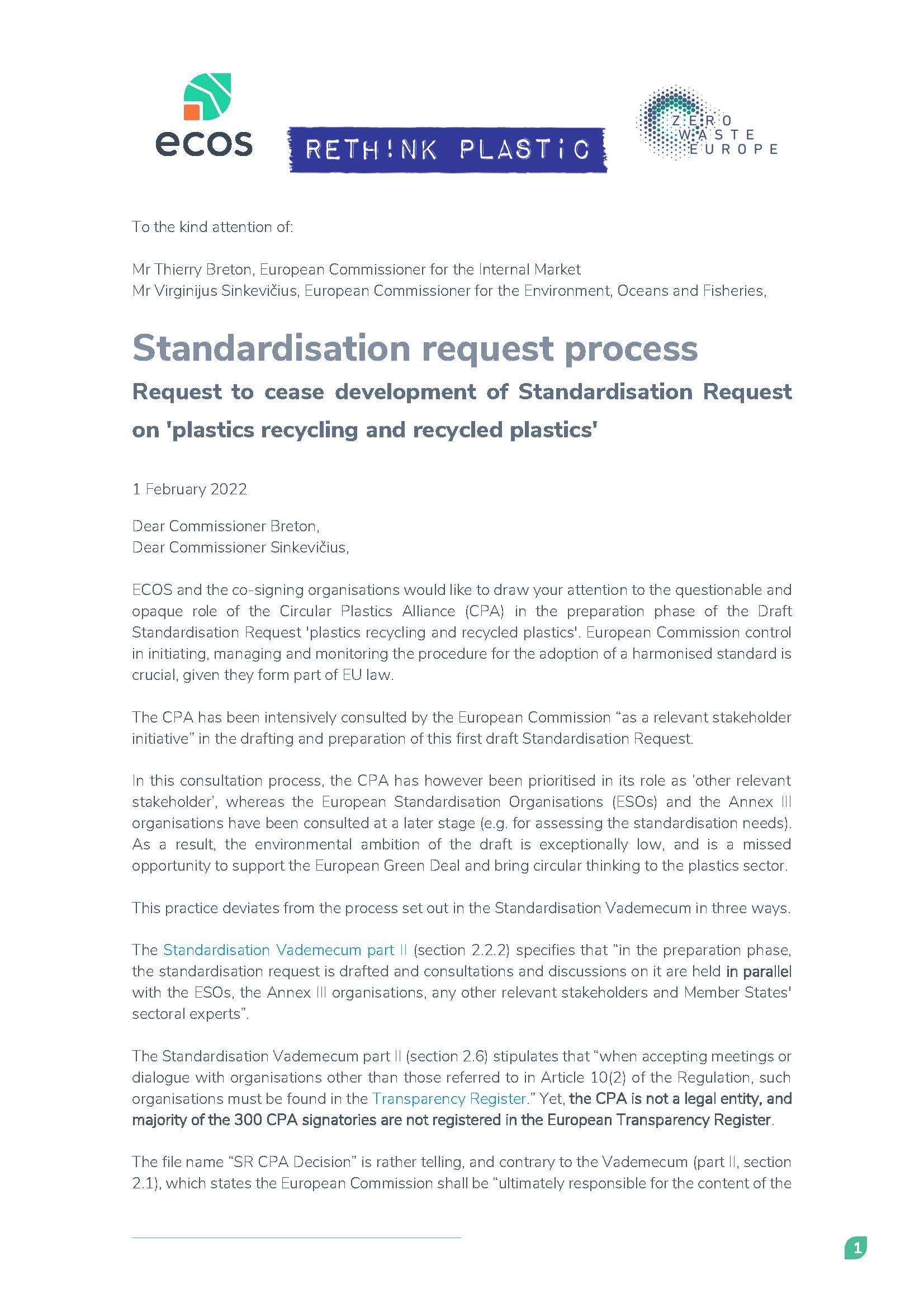 In a letter sent to the European Commission, ECOS, Zero Waste Europe, and the Rethink Plastic alliance ask EU Commissioners Thierry Breton and Virginijus Sinkevicius to stop the development of a Standardisation Request on ‘plastics recycling and recycled plastics’. This is the first stage for new standards on the matter. 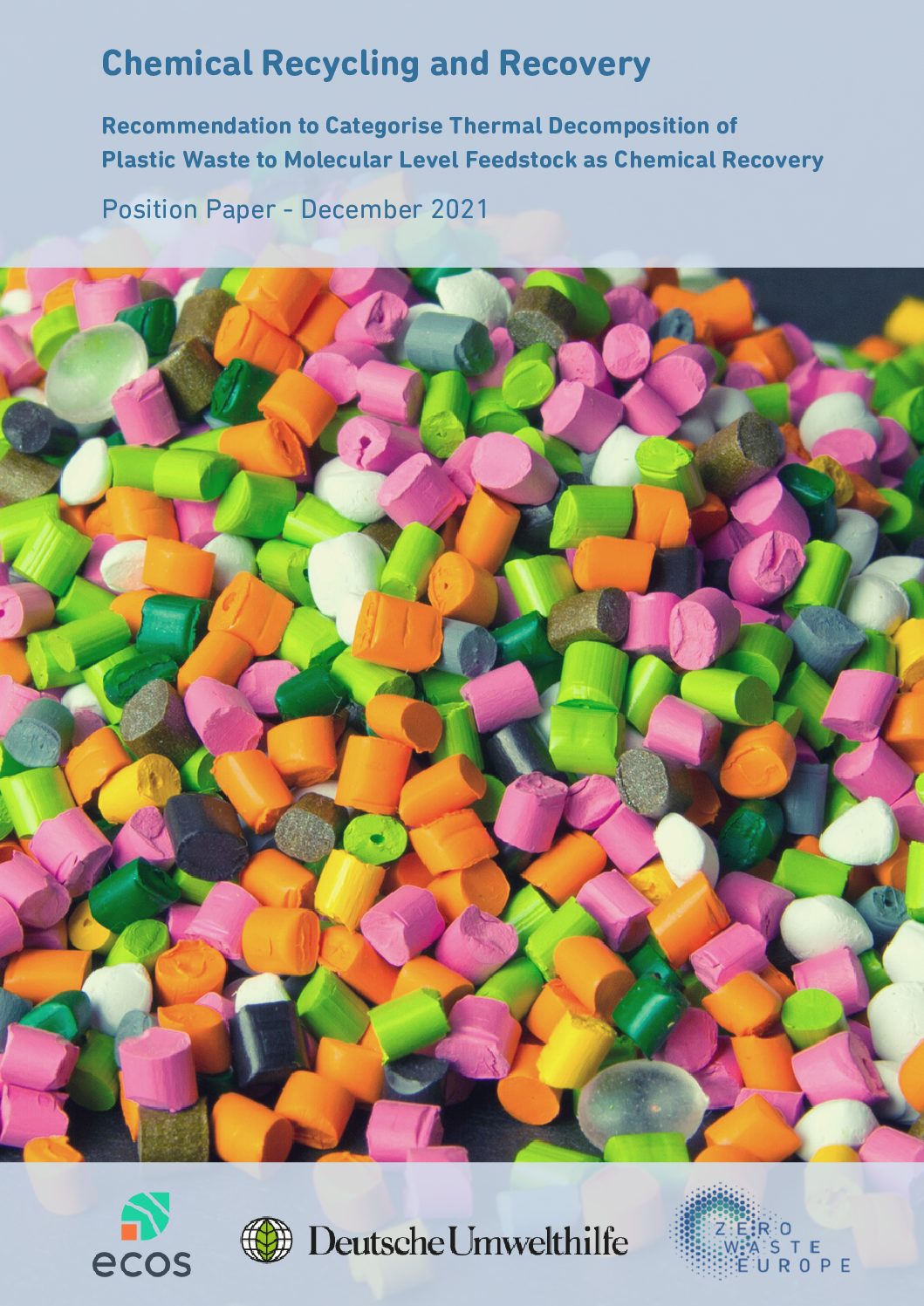 The objective of this briefing is to provide a recommendation for categorising thermal decomposition of plastic waste into feedstock molecules as chemical recovery. This covers mainly pyrolysis and gasification techniques.
The European waste hierarchy for a circular economy must be operationalised to favour reduction, reuse, and, as a last resort, recycling. It is, thus, essential to distinguish plastic waste recycling operations from recovery techniques. As such, pre-treatment of plastic waste into feedstock molecule shall be classified as chemical recovery and not chemical recycling. 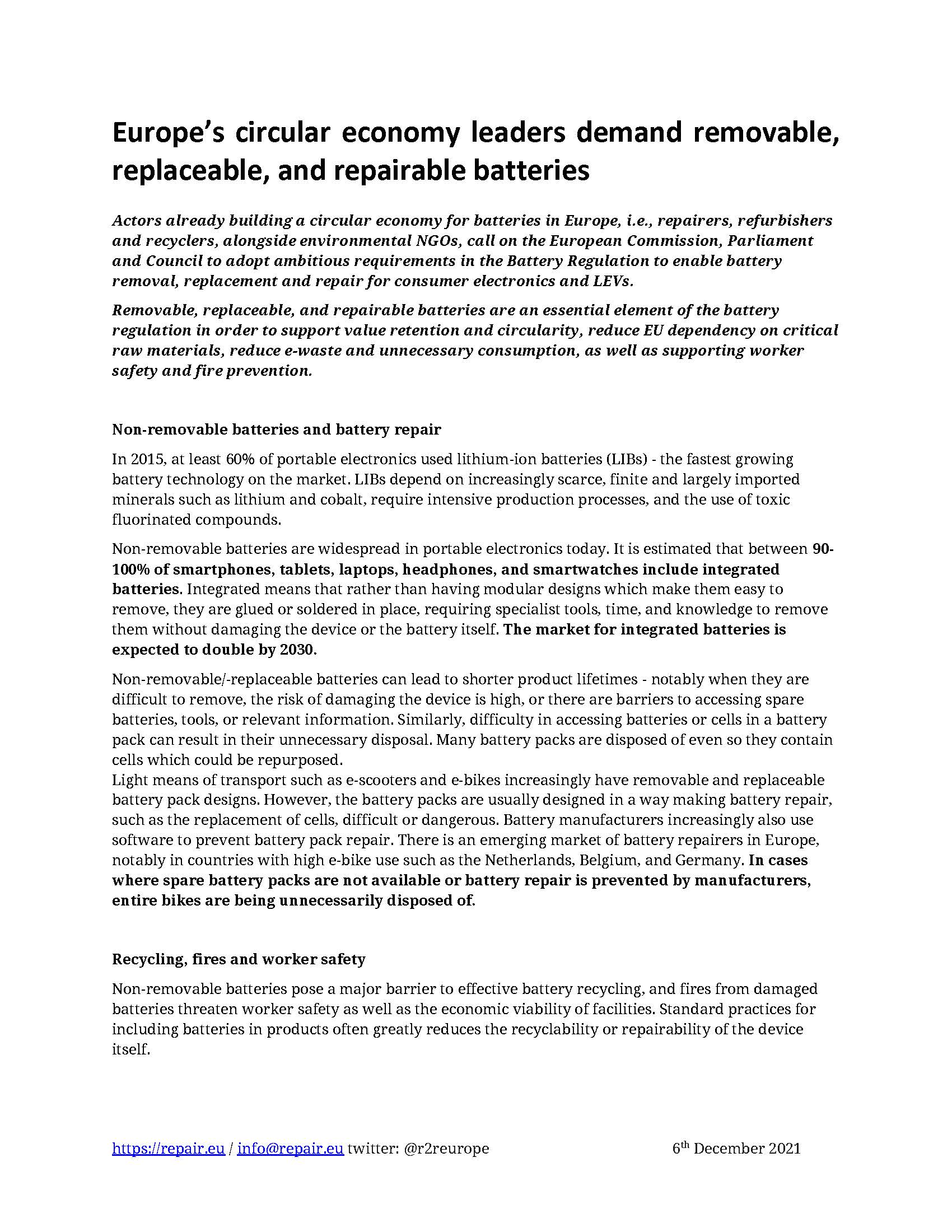 In a statement led by EEB, Zero Waste Europe and 21 other organisations call on the European Commission, Parliament and Council to adopt ambitious requirements in the Battery Regulation to enable battery removal, replacement and repair for consumer electronics and LEVs. 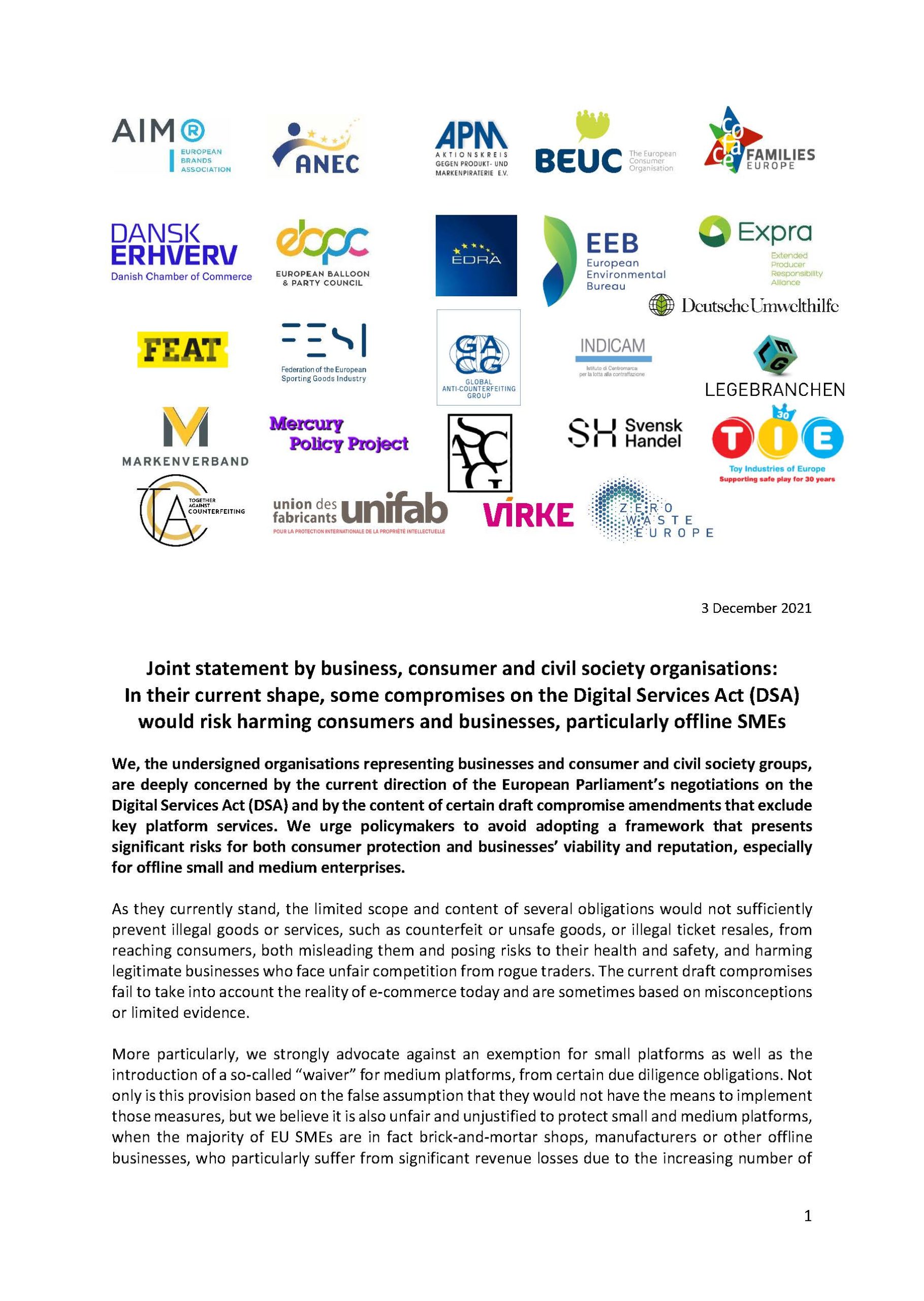 In a joint statement spearheaded by BEUC, ZWE and 23 other organisations representing businesses and consumer and civil society express their deep concern about the current direction of the European Parliament’s negotiations on the Digital Services Act (DSA) and by the content of certain draft compromise amendments that exclude key platform services. We urge policymakers to avoid adopting a framework that presents significant risks for both consumer protection and businesses’ viability and reputation, especially for offline small and medium enterprises.