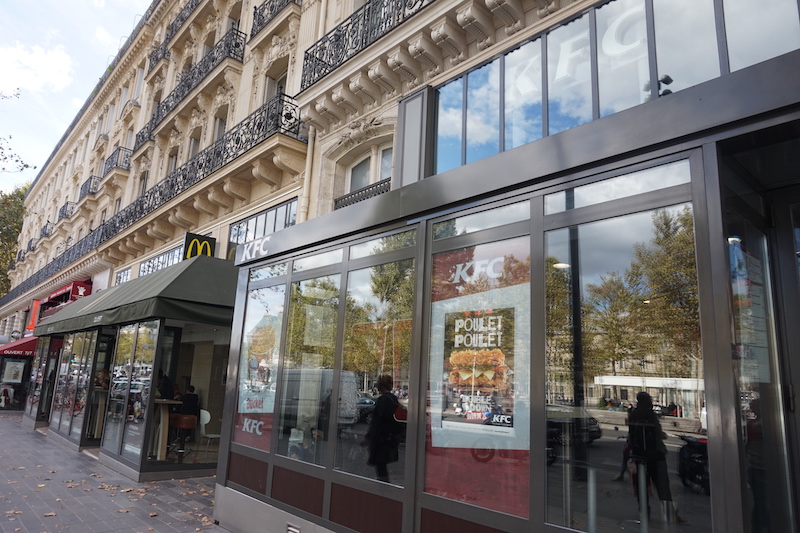 Released by our member Zero Waste France on 18 October 2018. Translated by Inès Djegham.

Paris, 18 October 2018 – Zero Waste France has just lodged a complaint against two McDonald’s and KFC outlets located in Paris, Place de la République, for failing to set up bins dedicated to waste sorting in customer dining areas. As a matter of fact, sorting of waste is a statutory obligation weighing on such businesses since 2016. After leading an investigation on the field, the NGO requested the opening of a public inquiry from the State Prosecutor at the Tribunal de Grande Instance of Paris.

Waste sorting by businesses: a legal obligation since 1 July 2016

Since the entry into force of a decree known as “the 5 stream decree” on 1 July 2016, all businesses, as well as stores and administrations, are subject to the obligation to sort their paper, metallic, plastic, glass and wood waste [1]. The text therefore extends the already compulsory sorting obligation for households to all economic actors.

However, the implementation of the text is still on hold as a result of a failure to address sorting solutions for employees and customers. This applies to the fast food industry which generates 13 billion packaging units a year. This statement is supported by a Zero Waste France report of May 2017 on McDonald’s’ waste policy. The report demonstrates the industry’s inaction in terms of circular economy – despite its close-to-5-billion-euro turnover in France. A petition and numerous mobilisations took place following the report everywhere in France to ask for the implementation of waste sorting.

Two years later, only a few McDonald’s outlets are equipped with sorting bins inside the restaurants (76 according to McDonald’s France in May 2018, on approximately 1500 outlets) and the procrastination of the fast-food chain – which has been going from “testing phase” to “experimentation” for more than 10 years now – must be acknowledged. KFC does not seem to be considering any experimentation, in spite of their ambition to open 300 new restaurants before 2025.

A field investigation to document a criminal complaint

Zero Waste France’s complaint follows an investigation documenting the absence of sorting bins inside restaurants and the analysis of garbage bags once outside. What is more, these two outlets constantly receive customers and are located in a very dense and visited area of Paris, 5 minutes away from the Statue of Place de la République.

According to Thibault Turchet, Head of legal affairs of Zero Waste France, “the fast food industry generates a tremendous amount of waste, although most of it is recyclable. It is therefore urgent for this industry and for businesses in general to abide by the statutory provisions that are applicable to them, or circular economy will not move forward.”

The NGO, represented by Mr Alexandre Faro, legal counsel, now hopes for the opening of a public inquiry by the Prosecutor. In any case, Zero Waste France has sent out today a letter addressed to the Ministry for Ecological and Inclusive Transition to raise awareness on this situation.

Companies that are subjects of the complaint are innocent until proven guilty.

[1] Pursuant to the decree, waste sorting obligation applies to paper, metal, plastic, glass and wood waste, and weighs on any producer who does not resort to public service collection. A threshold of 1100L of waste per week is applicable for establishments whose waste is collected by local authorities.

Read the original press release in French“The fast food industry generates a tremendous amount of waste, although most of it is recyclable. It is therefore urgent for this industry and for businesses in general to abide by the statutory provisions that are applicable to them, or circular economy will not move forward.”