The Zero Waste Tour kicks off! 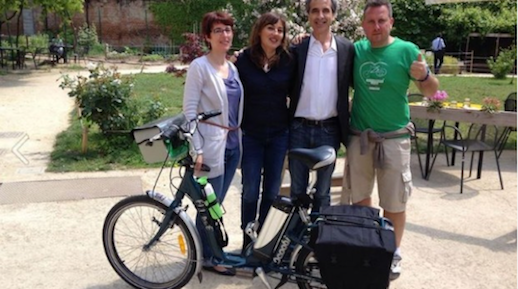 The Zero Waste activist Danilo Boni started cycling the tour which will bring him to visit many Zero Waste experiences in the country.

The tour starts today Tuesday, May 27, in Milan in an event which acknowledge the efforts of 19 companies and start-ups who have distinguished themselves for promoting clean production processes in which all the outputs of the production are turned into inputs  so that the materials remain in use.

With this initiative, Zero Waste Italy in collaboration with the Municipality of Capannori (LU ), the Zero Waste Research Centre, the Association AmbienteFuturo and many local groups and municipalities throughout Italy, aim to highlight and reward the commitment of businesses in achieving the goal of Zero Waste .

“More than 70 % of the waste problem can be solved by the citizens by separating waste for recycling. But the remaining 30% is waste which cannot be properly managed and needs to be redesigned upstream. This must be solved together with companies” said Rossano Ercolini, president of Zero Waste Europe.

In the morning of May 27, councillor Piefrancesco Maran welcomed the delegation of the Zero Waste movement , including Paul Connett , a global promoter of Zero Waste strategy, Rossano Ercolini , winner of the Goldman Environmental Prize in 2013 and president of Zero Waste Europe and Enzo Favoino , a researcher at the Scuola Agraria del Parco di Monza and coordinator of the Scientific Committee of Zero Waste Europe.

In the afternoon the cyclist Danilo Boni, accompanied by a delegation of Zero Waste Italy, will start pedalling the electric bicycle Frisbee, provided by TC Mobility official sponsor of the tour.

Later in the afternoon there was a meeting in Busto Arsizio, to be attended by Paul Connett and Enzo Favoino . After the meeting the tour continues along the way from the Villa Tovaglieri to the headquarters of the incinerator Accam. The event is organized by local committees Zero Waste under the patronage of the town of Busto Arsizio.

The stages of the tour will be the following :

In parallel to the tour, Professor Paul Connett will be the protagonist of another tour that will take him on May 30 in Naples, where he will attend a meeting with the schools on the theme of “Terra dei Fuochi” (Land of Fires), and Saturday, May 31 he will join Rossano Ercolini in Sorrento for a meeting in the Conca Park Hotel as part of the “Hotels and restaurants Zero Waste.”

Ercolini will also participate in a panel discussion open to citizens of the Versilia with mayors and councillors of Seravezza , Pietrasanta and Forte dei Marmi. The meeting, scheduled for May 29, is organized by GAS di Pietrasanta and Seravezza .

You can follow the tour in the ZWTour blog using the hashtag  #ZWtour and on the Facebook page of Zero Waste Italy.