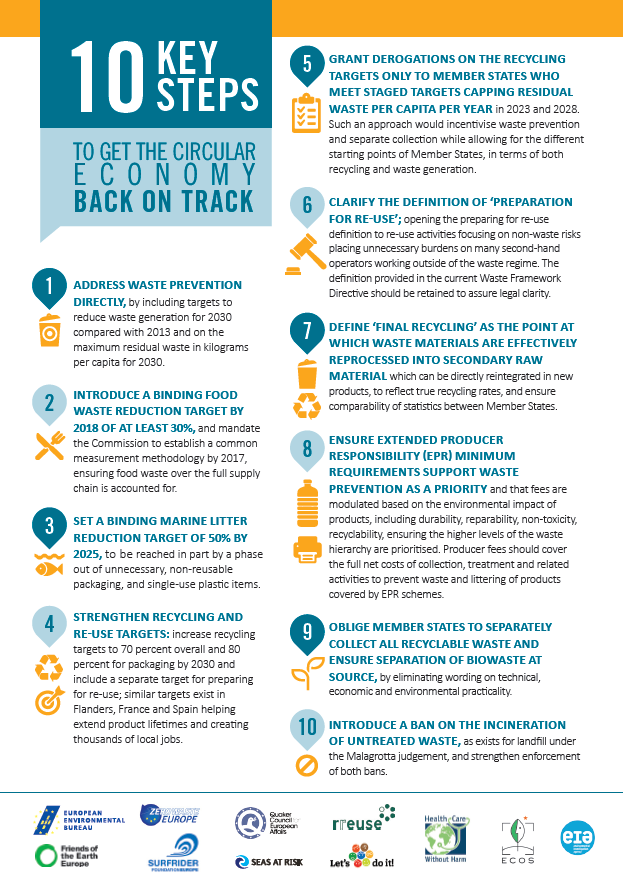 This press release is now available in Croatian

11 NGOs including Zero Waste Europe have called on the European Parliament to introduce 10 key changes to get the circular economy back on track. These ten changes intend to maximize the potential of a circular economy and eliminate loopholes that could be used by Member States to avoid necessary action.

Reacting to the Circular Economy Package presented on December 2, 2015, Zero Waste Europe welcomes the initiative of the EC to widen of the scope of the Circular Economy, however it warns about the fact that the ambition regarding waste legislation has been weakened in comparison with the 2014 proposal.

The document 10 KEY STEPS primarily calls for addressing directly waste prevention, by including waste generation reduction targets and capping residual waste. Additionally, the NGOs call for the bringing back of the 2014 recycling targets and for the setting of binding food waste and marine litter reduction targets. Another of the key demands is the need to ensure that all recyclable waste is separately collected and the modulation of EPR based on the environmental impact of products.

According to Joan Marc Simon, Executive Director of Zero Waste Europe, “the EU should  approach waste holistically; the Parliament and the Council should give to circular economy the ambition that the Commission failed to deliver”. Mr Simon added that “The non-binding waste hierarchy has proven to be insufficient to create virtuous waste management; we need specific actions and targets to reduce food waste, marine litter and residual waste and close the existing loopholes in order to move away from landfills and incinerators”.