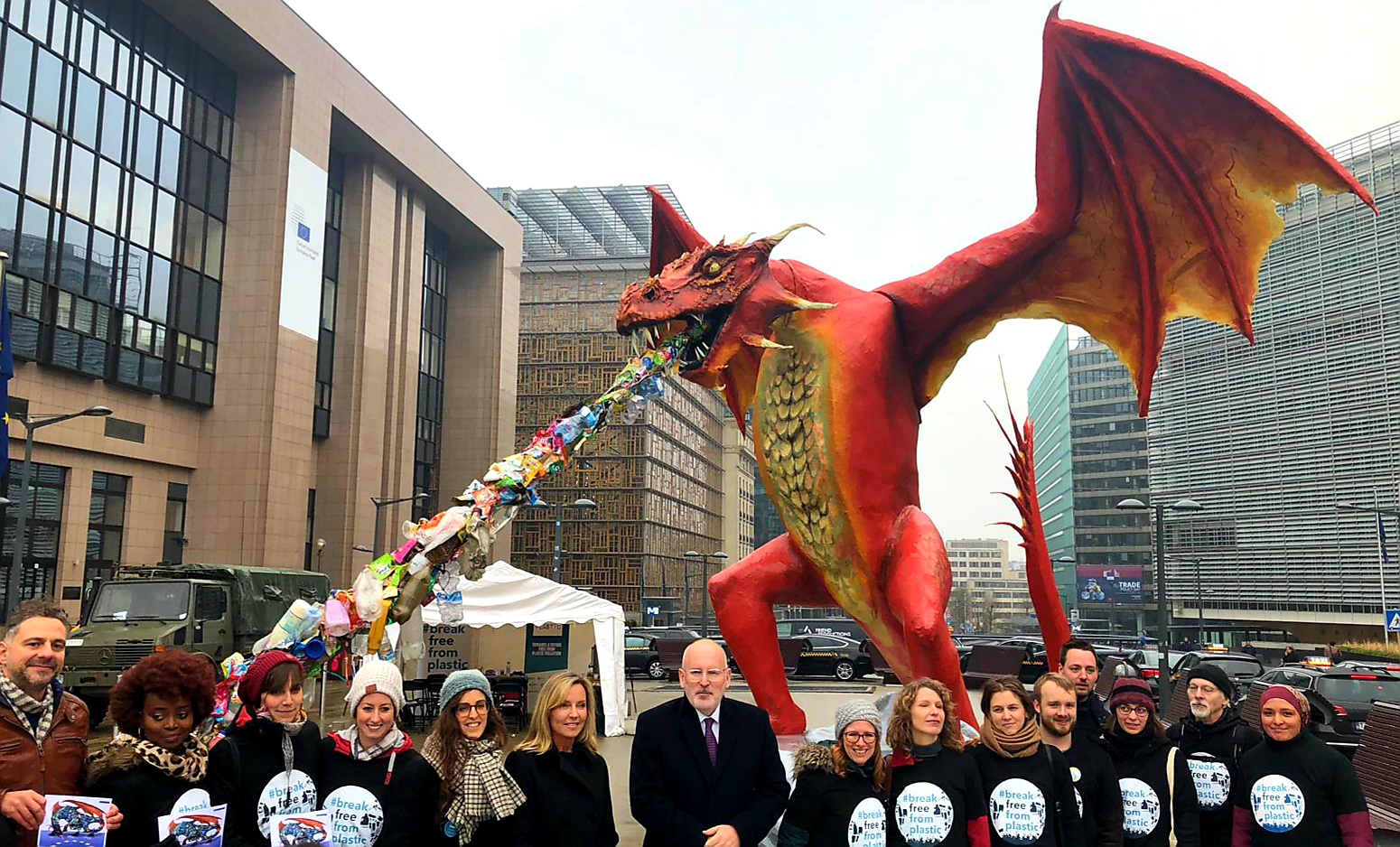 #BREAKING: the #PlasticPollution dragon is sieging @EUCouncil, but EU champions can defeat it and #breakfreefromplastic. @EU_Commission & @Europarl_EN have joined the good fight, will national governments follow?#rethinkplastic #singleuseplastic #plasticsstrategy pic.twitter.com/wzMA07gkgg

“The fight against plastic pollution is one that we can win. The EU plastics laws initiated by the Commission and endorsed by the Parliament are a first step towards a future where plastic doesn’t poison us. If we commit to this together, nobody loses, everybody wins“, said European Commission vice president Frans Timmermans at a press conference today. “The industry is clearly now focusing its energy on the EU Council. It’s up to the Austrian presidency to resist, and maintain the level of ambition initiated by the Commission, and reinforced by Parliament. This is the perfect slot in our history to impulse the virtuous change demanded by citizens. Disappointing them would be tragic”, added Frédérique Ries, who represents the European Parliament in the negotiations on the single-use plastics law. 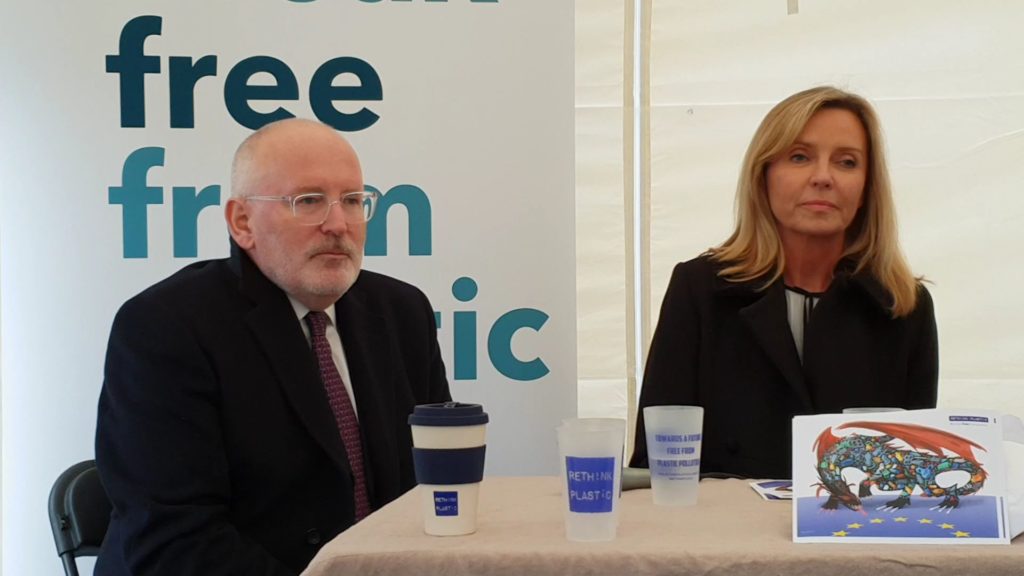 Mr Timmermans and Ms Ries were speaking beside a three-metre tall dragon spewing single-use plastic litter collected in beach clean-ups, which will stay in front of the Council till Wednesday.

“The Commission and Parliament plan would deal a significant first blow to the monster of plastic pollution, but this plan is at risk. Consumption of throwaway plastic needs to be cut drastically, and the companies making money on the back of this pollution must also be held responsible. If governments don’t ensure the polluter pays, they side with the dragon” said Delphine Lévi Alvarès, European Coordinator of Break Free From Plastic [1]. 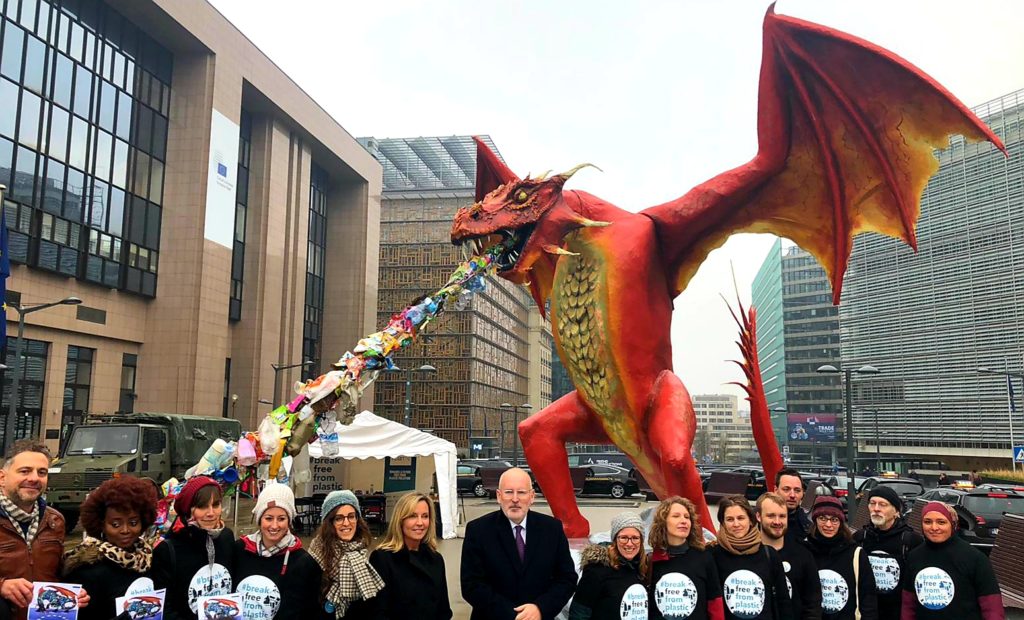 Campaigners warned that national governments risk weakening ambitious extended producer responsibility (EPR), whereby producers would cover costs for clean-up of litter, for management of plastic waste [2], as well as for awareness raising. Notably, countries may attempt to delay EPR implementation by four years, and exempt waste management costs for some items including the most littered plastic item in Europe: tobacco filters.

“We are at a turning point. Member States must break with short-termism, by holding producers accountable and supporting ambitious prevention and collection measures for fishing gear as well as single-use plastics. EU institutions have the unique chance to spearhead global action on swift and effective solutions to curb plastic pollution.” said Frédérique Mongodin, Seas At Risk senior marine litter policy officer, on behalf of Rethink Plastic. [3]

On November 28, the European Commission, the European Parliament and the Council are meeting for a second round of negotiations on single-use plastics laws. The third and last negotiation round is to take place on December 18.

[1] Break Free From Plastic published in October the results of its global brand audits which identify top plastic polluters: https://www.breakfreefromplastic.org/globalbrandauditreport2018/

[2] Including putting relevant waste collection infrastructure in place and collecting, transporting and treating this waste.

[3] The European Parliament voted last month in favour of modulated financial contributions to promote eco-design as well as specific 50% collection and 15% recycling targets for fishing gear.