Transitioning Europe towards zero waste and a circular economy requires transforming our society. To achieve this bold vision, stakeholders and citizens need to be empowered with accessible and powerful information in order to become change agents in their communities.

Zero Waste Europe has been at the forefront of Europe’s transition to zero waste and circular economy since its creation in 2013. During this time, we have created resources in order to help accelerate the transition towards a zero waste Europe, which you can find in our online library, designed with you in mind.

Whether you are a decision-maker after policy briefings outlining the negative impacts of waste incineration, an entrepreneur searching for the latest case studies on zero waste business models, an activist looking for a guide on separate collection of waste or a journalist looking for fact-sheets on the benefits of zero waste – our library is for you.

Waste & COVID-19. Study of new environmental impacts in the context of COVID-19 in Ukraine 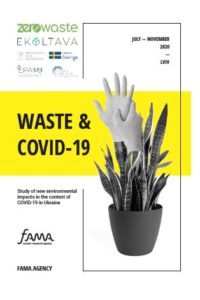 This study focused on the possibility to adapt and provide appropriate recommendations on the response of the Ukrainianwaste management system to the СОVID-19 crisis. The report has been developed by our member Zero Waste Lviv in cooperation with the NGO Ekoltava and the Custom research agency Fama. 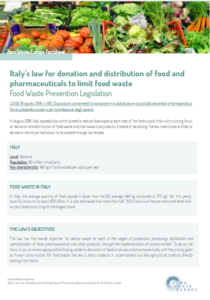 In August 2016, Italy passed a law which aimed to reduce food waste at each step of the food supply chain with a strong focus on donation and distribution of food waste and pharmaceutical products. Instead of penalising, the law incentivises entities to donate or distribute food about to be wasted through tax rebates. Read more in our factsheet. 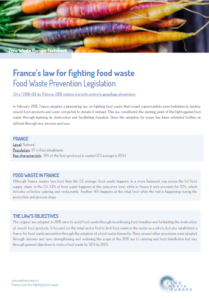 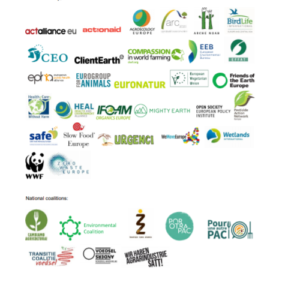 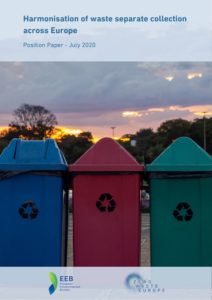 We joined forces with the European Environmental Bureau (EEB) to provide our policy recommendations to the European Commission concerning the harmonisation of waste separate collection across Europe. 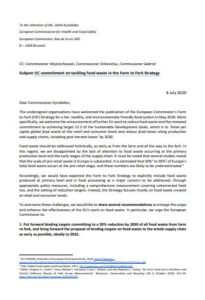 We joined forces with other 9 NGOs to ask the European Commission to rethink their food waste commitments in the recently released Farm to Fork Strategy. We suggest binding targets committing to a 50% reduction by 2030 and introducing food waste prevention as mandatory criteria for sustainable food procurement. 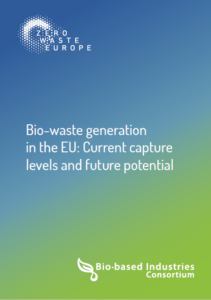 Zero Waste Europe and the Bio-based Industries Consortium analyse the untapped potential of biowaste (garden and food waste) in Europe. The first study of its kind details the current generation and capture rates in the EU with dedicated country fact-sheets and municipalities best practice.

The case for an integrated Waste Prevention Framework. Can the European Union support waste prevention without a proper legislation? 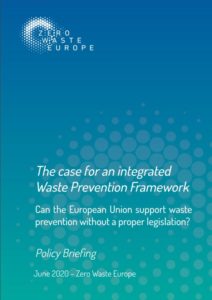 Zero Waste Europe released a policy briefing which addresses the current EU legislation on waste management and analyses different ways to design a comprehensive and coherent waste prevention framework which embeds all different steps of the supply chains from sustainable production patterns to sustainable waste management.

Building a bridge strategy for residual waste. Material Recovery and Biological Treatment to manage residual waste within a circular economy 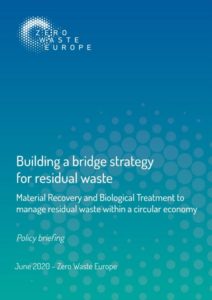 Zero Waste Europe releases today a policy briefing which highlights the importance of defining a new strategy for managing residual waste that corresponds with the requirements of the age of climate emergency that we are living in. The report defines an approach based on Material Recovery and Biological Treatment as a bridge strategy for managing residuals within a circular economy.

FAQ on COVID-19 and zero waste 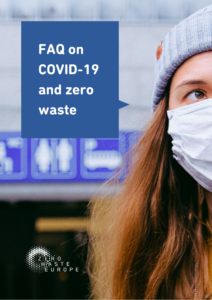 Zero Waste Europe analyses the impacts of COVID-19 on zero waste and suggests what can be done to keep working toward a zero waste future.

Zero Waste Europe’s Feedback on the Farm to Fork Strategy: towards a food system free of chemicals, overpackaging and waste 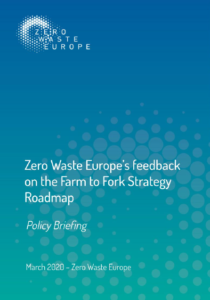 The Farm to Fork Strategy presents a great opportunity to profoundly reshape our relation to food and design food waste, hazardous chemicals and overpackaging out of our food system. Addressing such issues specifically requires a holistic vision leading to coordinated actions all along the food supply chain. Read Zero Waste Europe’s feedback on the new Farm to Fork Strategy Roadmap.

The landfill target may work against the circular economy. Should we minimise percentages or tonnes? 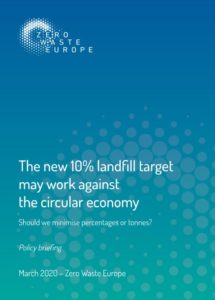 This Policy Briefing which analyses in depth the new Landfill Directive, part of the Circular Economy Package adopted in 2018. Specifically, the landfill minimisation target obliges Member States to limit the amount of municipal waste due to be landfilled to 10% or less of municipal waste generated at any given year by 2035. As the briefing describes, meeting the target is extremely challenging and the way it’s defined and must be calculated (in any given year and defined as a percentage) may contradict the overarching principles of the EU Circular Economy Agenda.