The impact of Waste-to-Energy incineration on climate"> 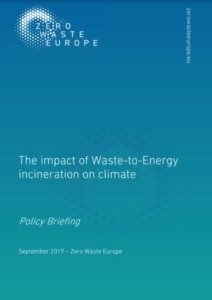 Waste-to-Energy incineration is sometimes promoted as a low-carbon source of energy, justifying increasing quantities of waste burned to produce electricity. The evidence, however, suggests that the carbon intensity of energy produced through incineration is greater than the one of the current EU average electricity grid intensity, while having significantly more adverse climate impacts than conventional electricity generation.