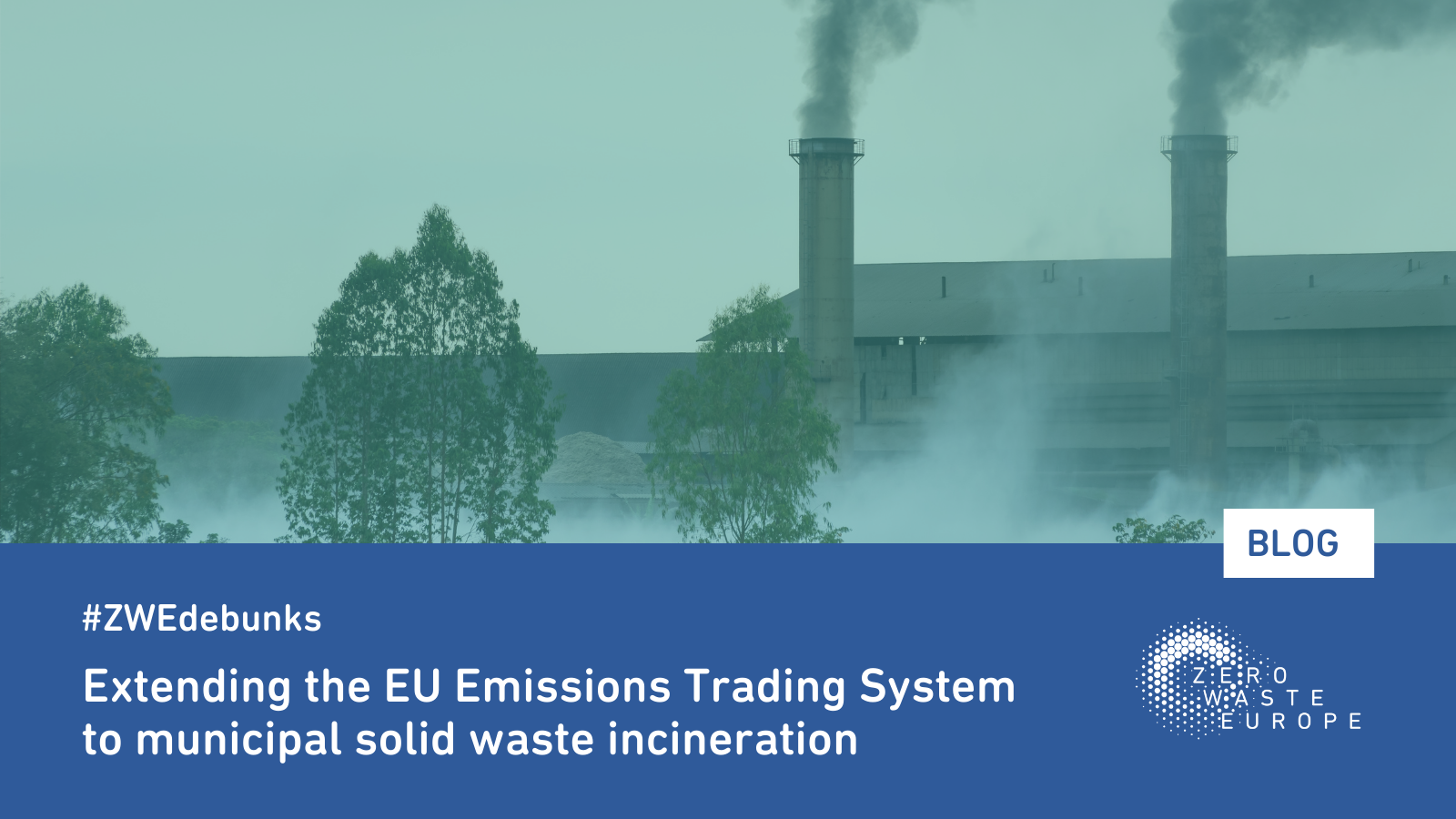 To achieve climate neutrality in the EU by 2050, it’s important to address all the sources of greenhouse gases (GHG) effectively. To do so, the European Commission is currently reviewing all its policies and considering extending the scope of the EU Emissions Trading System (ETS) to municipal waste incineration among other sectors. Yet, the industry claims that ETS shouldn’t be applied to waste incinerators and the inclusion would be counter-productive.

We have reviewed and debunked their claims to show the multiple benefits of this inclusion and how this could be done in practice.

Municipal Solid Waste Incinerators (MSWI) burn municipal or similar waste as a fuel to generate energy. Plastics make up a significant proportion of the material burned by municipal incinerators. As conventional plastic is derived from petroleum, it is a fossil fuel that is recognised as a source of harmful climate change emissions.

Moreover, the fossil CO2 emissions from MSWI have increased about 300% over the past decade, reaching 52,102kt fossil CO2 in 2018. Therefore, there is a really urgent need to address those emissions.

Since these infrastructures are meant to last for about 15-20 years, they are delaying a much needed and urgent transition to less carbon intensive power generation infrastructure, such as wind and solar renewable energy.

In fact, according to the latest available data, the total CO2 emissions from burning waste in MSWI plants in 2018 was around 95,425kt CO2, which is almost the same as the CO2eq emissions from landfills, 99,429kt CO2eq in 2018.

4. The ETS costs on WTE will negatively impact waste management activities higher up in the waste hierarchy.

Composition analysis of residual waste indicates that the majority of what is currently used as incinerator feedstock could be recycled or composted. A higher cost of incineration would directly encourage improving separate collection and sorting processes to recover those materials still ending up in the residual waste stream.

This would also go hand-in-hand with the move towards greater Extended Producer Responsibility. A higher price for incineration would provide a market signal to those producing non-recyclable and hard-to-recycle products, as they would be paying more of the climate change costs of their design decisions.

5. If energy recovery from waste will become too expensive inside the EU, most likely higher amounts of residual (plastic) waste will be exported to other countries with lower costs or lower environmental and social standards.

Actually, residual waste shipments to non-OECD countries are prohibited already. Shipments to OECD countries could still happen, but they are subjected to a procedure of prior written notification and consent – meaning that the importing country would have to give its consent before the shipment could take place.

As for illegal shipments, both the EU and importing countries are increasingly cracking down on waste crimes, so it will be harder to export residual waste illegally (e.g., labelling it as recyclable plastic or paper).

6. As some member states have taxed waste incineration already, the extra ETS cost would present a double tax on incineration.

An extra ETS cost would principally affect the cost of burning fossil materials (e.g. plastic packaging, synthetic clothes, etc.). It could be combined with an overall tax on waste incineration, which could be adjusted accordingly if necessary. The advantage of combining it with a tax on incineration is that it would increase the incentive for recycling not only fossil based materials, but also other items such as food waste, paper, metals, etc.

7. The extra ETS costs would be reflected in a higher gate fee for waste treatment or to the prices of the energy, meaning higher costs for the citizens, the local communities, and the industry.

It’s important that the higher costs of incineration are applied to enforce the ‘polluter pays’ principle. Therefore, the extra costs should be allocated as much as possible to waste providers/generators, e.g. by charging a higher gate fee for the treatment of fossil materials. Adopting the ‘polluter pays’ principle identifies the polluters and, by allocating the cost for emitting carbon towards them, adds an incentive to improve sorting and to decrease the share of fossil content – as well as take on new habits to reduce residual waste generation in the first place.

Additionally, the inclusion would help to correct the current unfair competition with renewable energy providers (such as wind and solar), which have to compete with the relatively cheap energy provided by municipal incinerators as the current system does not ‘price-in’ the fossil carbon cost of waste incineration.

8. A common normative framework and clear technical guidelines on EU level should first be defined for the determination of the CO2 fossil fraction emitted by WTE facilities.

There are already existing methodologies to monitor the fossil CO2 emissions from waste incinerators such as the radiocarbon ((14)C) method. These methods are used by, for example, countries that have included waste incinerators voluntarily in the scope of ETS (Sweden), as well by facilities that are already included at the EU level such as co-incineration facilities.

We recommend combining the radiocarbon method with the waste composition analysis. The latter allows consideration changes in waste composition due to either feedstock (e.g. more biogenic materials such as garden waste during certain seasons) or waste collection practices (e.g. introduction of separate collection of biowaste from the end of 2023). This would allow us to determine what is being incinerated, and to assess how much of it was recyclable or reusable, giving decision makers the chance to implement new strategies to recover those materials.