The EU is clear: Waste-To-Energy incineration has no place in the sustainability agenda 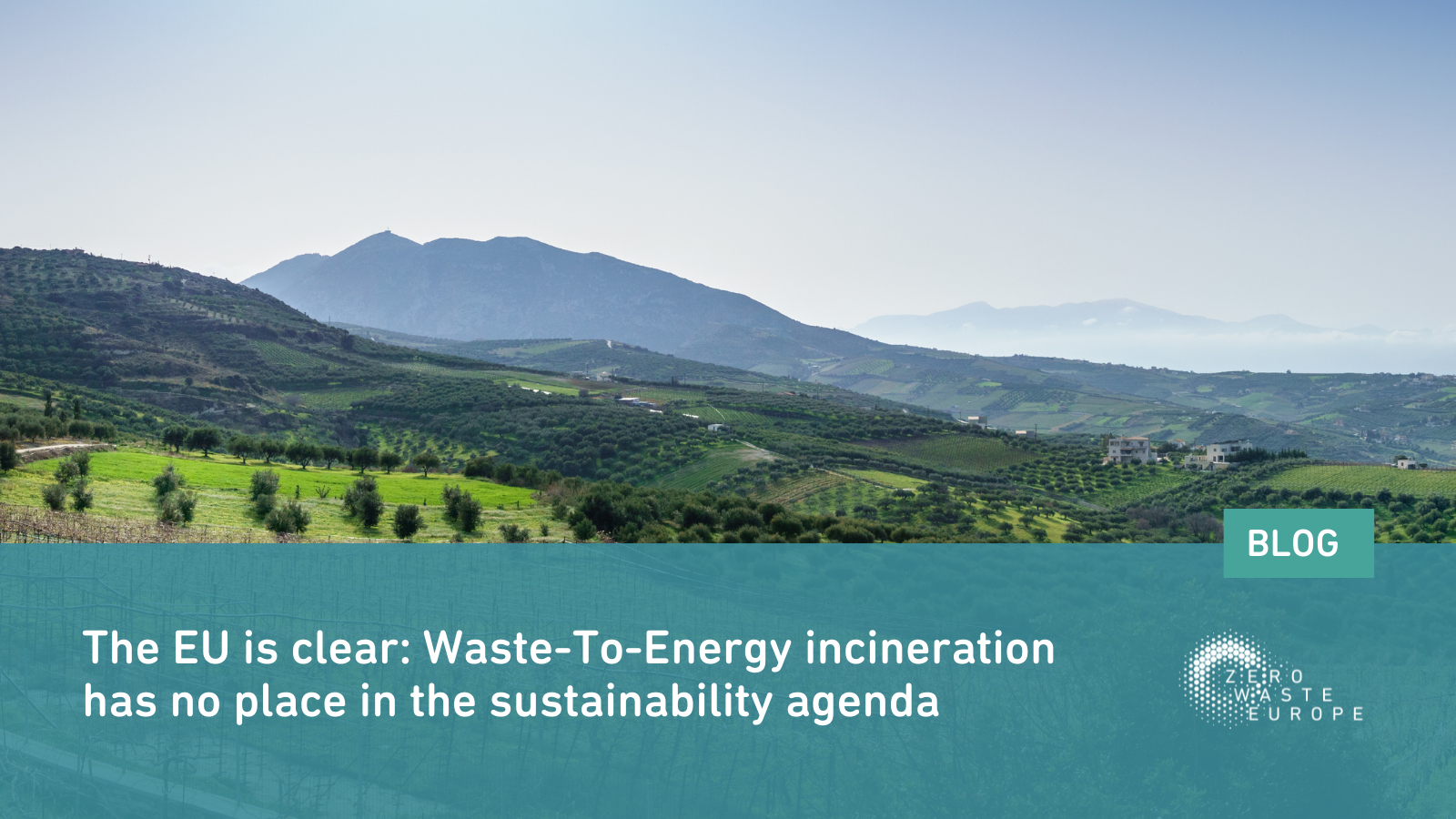 The EU is gradually turning away from Waste-To-Energy (WTE) incineration with major European financial institutions excluding it from financial support. Having established ambitious targets such as achieving carbon neutrality by 2050 [1] and halving total residual waste by 2030 [2], it is clear that fast and robust changes are needed. Waste incineration is a carbon-intensive process undermining the efforts to decrease carbon emissions and, thus, to reach carbon neutrality on time. Additionally, it harms rather than supports the transition to a circular economy. Since both non-recyclable and recyclable waste can be used as a feedstock to a waste incinerator, waste prevention and recycling are discouraged, while tending to lock-in an increasing generation of waste over time.

As such, the European financial institutions are now choosing to support alternatives that are less carbon-intensive and are higher in the waste hierarchy, excluding Waste-To-Energy incineration from their sustainability agenda. Here’s a recap of the latest developments on this policy front.

The Recovery and Resilience Facility

The Recovery and Resilience Facility, which came into effect in February 2021, aims to mitigate the economic and social impact caused by the coronavirus pandemic. It provides €672.5 billion in loans and grants that will support EU member states to build more resilient and sustainable economies, as well as help them to achieve a green and digital transition.

Each member state has to prepare their recovery and resilience plans following the guidelines proposed by the European Commission. Under these guidelines, no measure “should lead to significant harm to environmental objectives within the meaning of Article 17 of the Taxonomy Regulation”. Based on this, a list of measures that ‘do no significant harm’ (DNSH) was produced.

The construction of new waste incinerators was presented as an example of non-compliance with the DNSH principle. In particular, the report mentions that it threatens the transition to a circular economy since it will likely “lead to a significant increase in the generation, incineration or disposal of waste, with the exception of the incineration of non-recyclable hazardous waste”, breaching the Article 17(1)d(ii) of the Taxonomy Regulation (‘Significant harm to environmental objectives’). Additionally, it hampers alternatives that have higher environmental performance, such as reuse and recycling as well as it undermines the achievement of recycling targets, since significant amounts of both recyclable and non-recyclable waste are usually used as feedstock.

These two Funds aim to strengthen the economic, social, and territorial cohesion in the EU by reducing disparities among the European regions as well as to promote sustainable development. To achieve these purposes, they provide €234 billion for allocation.

Since December 2020, the activities qualified for financial support need to be in agreement with the climate and environmental standards and priorities of the EU and to do no significant harm to the environmental objectives.

More specifically, under the Specific Objective “Promoting the transition to a circular and resource efficient economy” the Funds support investments regarding

On the contrary, they do not support investments that aim to increase the facilities’ capacity for the treatment of residual waste, including waste incineration, with the exception of the outermost regions and technologies for material recovery. The desirable results (indicators) of this Specific Objective are to enhance:

The Just Transition Fund of €40 billion is one of the pillars of the Just Transition Mechanism, which sets the roadmap towards climate neutrality for 2050 in an effective and fair manner. This Fund aims to promote a balanced socio-economic climate transition by supporting the most affected regions and people.

According to its Regulation, eligible activities for investment should be sustainable in the long-term and in accordance with the objectives of the European Green Deal. They “should contribute to a transition to a sustainable, climate-neutral and circular economy, including measures aiming at increasing resource efficiency”. As a result, it is clearly stated that waste incineration is excluded from financial support, as “it belongs to the lower part of the waste circular economy hierarchy”.

The Taxonomy Regulation was published in 2020 and is a classification system that sets which economic activities can be considered environmentally sustainable. It establishes six environmental objectives. These are: climate change mitigation and adaptation, sustainable use and protection of marine resources, transition to a circular economy, pollution prevention and control and finally, protection and restoration of biodiversity and ecosystems. Sustainable activities can contribute to one or more environmental objectives but they must not cause “significant harm” to the others.

Economic activities that do significant harm to environmental objectives are presented in the Article 17 of the Taxonomy Regulation. It is specifically stated that an activity that “leads to a significant increase in the generation, incineration or disposal of waste, with the exception of the incineration of non-recyclable hazardous waste” does harm the objective of the circular economy transition.

The European Investment Bank Group (EIB), in order to meet the EU climate and environmental commitments, created the Climate Bank Roadmap. This roadmap provides the guidelines for climate and sustainable development finance while supporting the EU Green Deal.

The EIB states that the framework for climate action and environmental sustainability financing aims to align with the “do no significant harm” principle that was defined in the EU Taxonomy Regulation. Due to this, waste incineration is excluded from its financial support.

The above changes in financial mechanisms have been allowed and encouraged by the following legislation:

In this Directive it is mentioned that when promoting renewable energy actions, Member States should consider the waste hierarchy and circular economy principles, having as priority options of waste prevention and recycling. It is later explicitly stated that no support should be granted for renewable energy production from waste incineration, unless there is first compliance with the separate collection obligations according to the Waste Framework Directive (Directive 2008/98/EC).  When implementing this provision, Member States will consequently need to establish whether the separate collection obligations outlined in the Waste Framework Directive are being complied with.

As mentioned before, the Commission aims to halve residual waste in the EU by 2030 by adopting the Circular Economy Action Plan (CEAP) in 2020 and building on circular economy actions.

The European Parliament own-initiative report on the CEAP highlights that “Member States must strengthen prevention and preparation for reuse, increase high-quality recycling and move away from landfilling waste, while minimizing incineration, in line with the waste hierarchy.” It is mentioned that the optimal treatment of non-recyclable waste should be ensured and warns that building overcapacity of waste incineration could hamper the development of the circular economy.

The EU has decided that WTE incineration should be excluded from financial support since it is now recognized that it opposes the transition towards a carbon-neutral and circular economy. Instead, higher environmental performance waste management solutions that embrace the zero waste goal, such as waste prevention, reuse and recycling are now encouraged and being financed.

Considering that the EU has been historically leading the debate and policy making regarding circular economy, this recent approach should now serve as an example for other non-European regions and countries to reconsider and redesign their path towards sustainable development.

Kassandra Makavou is a volunteer blogger for Zero Waste Europe.