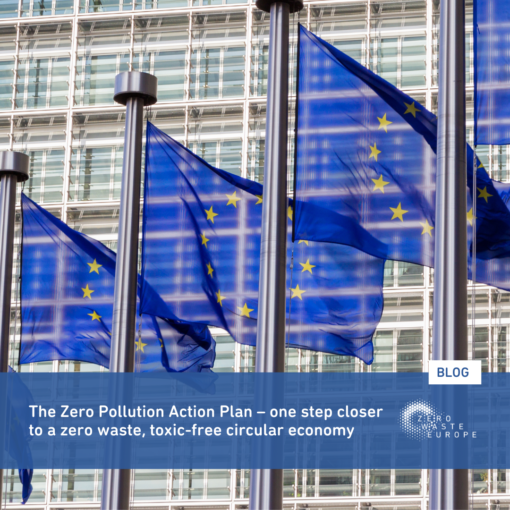 May 12th 2021 marked a special day in the global quest against pollution. It marked an important milestone that, if it is to become law, could bring us one small step closer towards the achievement of a zero waste society. The EU published its Zero Pollution Action Plan, aimed at decreasing air, water and soil pollution. This will hopefully lead the way for other global regions to follow suit.

While this is certainly a long-awaited milestone, it is important to note that the achievement of zero pollution is strictly linked to the achievement of zero waste. There cannot be a zero pollution society without there being a zero waste society. This is why, to achieve its zero pollution objective, the EU has to adopt strong policy measures to drastically decrease waste at source, as well as our reliance on waste incineration, in order for the plan to have a real impact once it is put into practice.

How do we currently deal with waste?

Many European countries base their waste disposal processes on incinerators, which, up until recently, was said to minimise pollution. The subject of waste incineration has also always gone along with the green-sounding slogan “Waste-To-Energy”, making it seem as though burning waste could favour energy production. However, there is a long list of concerns proving that this is far from the truth:

These are just some of the concerns regarding the effectiveness of waste incineration raised over the years, which have been increasingly pressuring national and supranational governments to find alternative solutions.

How should we prevent waste?

Before we can effectively recycle our waste without leaving unsustainable footprints, we also have to minimise the production and consumption of plastic, especially single-use plastics.

If we just consider that half of all the plastics ever produced have been manufactured in the last 15 years, plastic waste has already started piling up across the world. We don’t necessarily see it, that’s true, but that’s simply because we are exporting, burning it, or landfilling it – when it doesn’t break down in tiny pieces entering the environment and our bodies.

Plastic is also polluting our air, soil, rivers, and oceans. It is not biodegradable, which means it only breaks down into smaller and smaller pieces over time, and eventually ends up in our food chain. Bluntly put, we currently breathe and eat microplastics, and drink microplastic-infused water.

Banning single-use plastic is a long overdue measure to be taken by governments across the world, especially considering that valid, and sustainable alternatives already exist. The EU seems to be amongst the first to be taking steps in the right direction, as it is set to ban certain single-use plastic items such as straws, cutlery and plates from July 3rd 2021.

Stepping on the accelerator when it comes to recycling will reduce our dependence on waste incineration and on waste trade, which creates pollution elsewhere (the former is currently getting a more prominent spot in the news agenda thanks to the Plastic Waste Trade Manifesto). Yet we are still far from being able to recycle without leaving unsustainable traces throughout the process.

These are chemicals that not only leak into the environment but also harm our health. For instance, aluminium cans for beer, soft drinks, canned foods and so on, often contain bisphenol A (BPA); plastic containers often contain bisphenols and phthalates; and paper containers are often treated with PFAS. All these chemicals are linked to health issues, as well as infertility, metabolic disorders, developmental as well as immunological problems and more. They are also particularly damaging to the environment. The removal of such agents from all products and packaging is vital to achieving toxic-free material cycles and, consequently, a toxic-free circular economy.

What else can be done?

There is still much more to be done, though.  While over 170 countries have pledged to drastically reduce their use of plastic by 2030, we are yet to find out whether all these countries will in fact push towards a circular economy.  Bottom-up seeds of change have already been planted: for instance, the increase of packaging free shops over the past decade shows that there’s room among businesses, and appetite among consumers, for a systemic change towards circularity. Likewise, over the past years, we saw the emergence of waste-free, reuse-centric business models (such as Unverpackt, Freiburg Cup, or Recircle) capable of being replicated across the market chain and Europe at large.

The Zero Pollution Action Plan is the start we had been looking forward to. It is, however, only just a start.