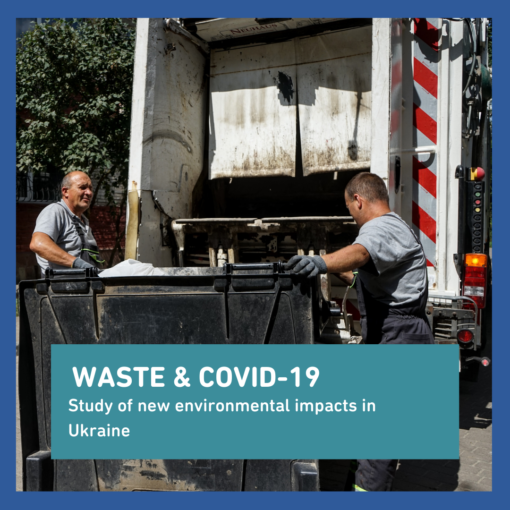 The COVID-19 pandemic has significantly changed the usual way of life all over the world and dealt a significant blow to several industries, daily work and the life of residents. However, there are a number of community-critical services that the absence of which would cause as great a problem as the recent pandemic has done. This is, in particular, relevant for the field of waste management. Companies and workers in this field, despite all the challenges, could not stop serving the city, otherwise, a collapse of our waste management systems would be inevitable.

Unfortunately, the waste management sector in Ukraine is not well studied and taken into account during decision-making processes. During the social lockdowns caused by the pandemic, there were always companies that dealt with all the waste generated in the municipality. But how did the lockdown impact the waste management system in Ukraine and what are its shortcomings, and, most importantly, how can this system be made resilient to future pandemics, given the principles of the circular economy?

This is the question we asked – representatives of the NGO “Zero Waste Lviv”, and in partnership with the NGO “Ekoltava”, the Custom research agency “Fama,” together with the support of “Zero Waste Europe”. Over the past months, project partners conducted analytical research on the impacts of the COVID-19 pandemic on waste management in Ukraine. This study was made possible with the support of the Renaissance Foundation and the Embassy of Sweden in Ukraine.

The research focused especially on a select group of Ukrainian cities, (Lviv, Truskavets, Poltava, Myrhorod), with context and evidence gained through using international experiences, including materials and case studies from Zero Waste Europe. 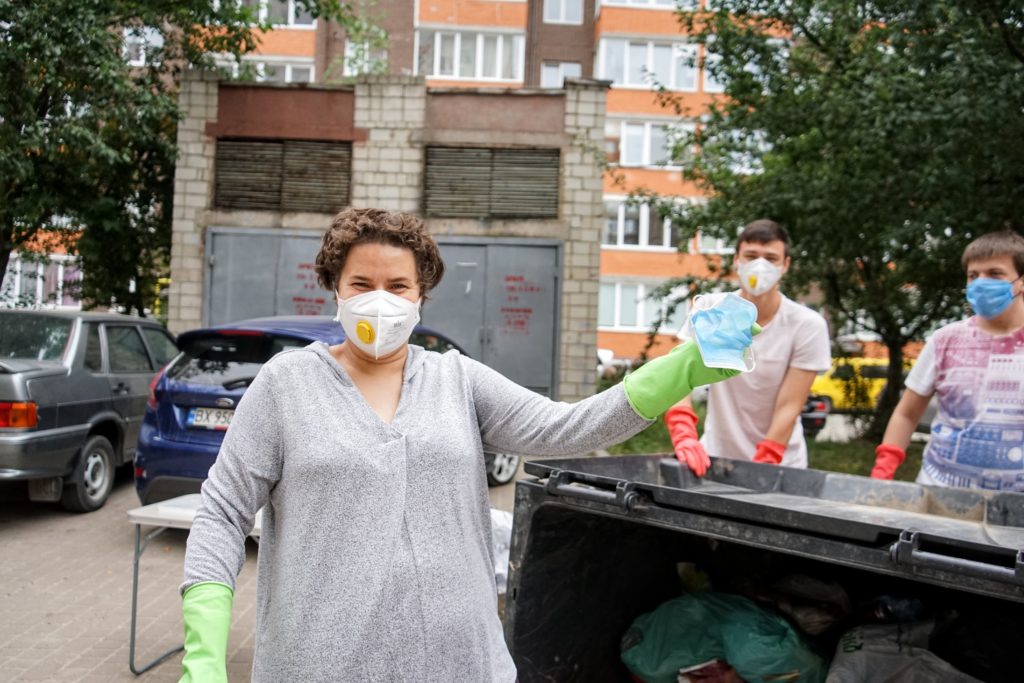 The cities for the study were chosen not by chance: we chose Lviv and Poltava as large cities and regional centers, and Truskavets and Morshyn are examples of cities of district importance with an average population. An important aspect was the field of tourism. Exploring these cities, we wanted to understand whether and how waste management systems in large and small cities, as well as regional features, differ.

During the study, we were able to identify the following key themes:

1 – Lack or insufficient amount of data from the waste management field.

To conduct the quantitative part of our study, we sought data on the amount of solid waste collected and exported in the studied cities during the acute lockdown period, as well as on the periods of lockdown easing in the following months. During our research, we found out that the data is not only absent on the Open data portals of the case cities, but is not even collected. The accounting is also not unified: somewhere the data is recorded in volumetric value, somewhere the weight is recorded. Furthermore, data on the collected recyclables are not collected by the receiving points. 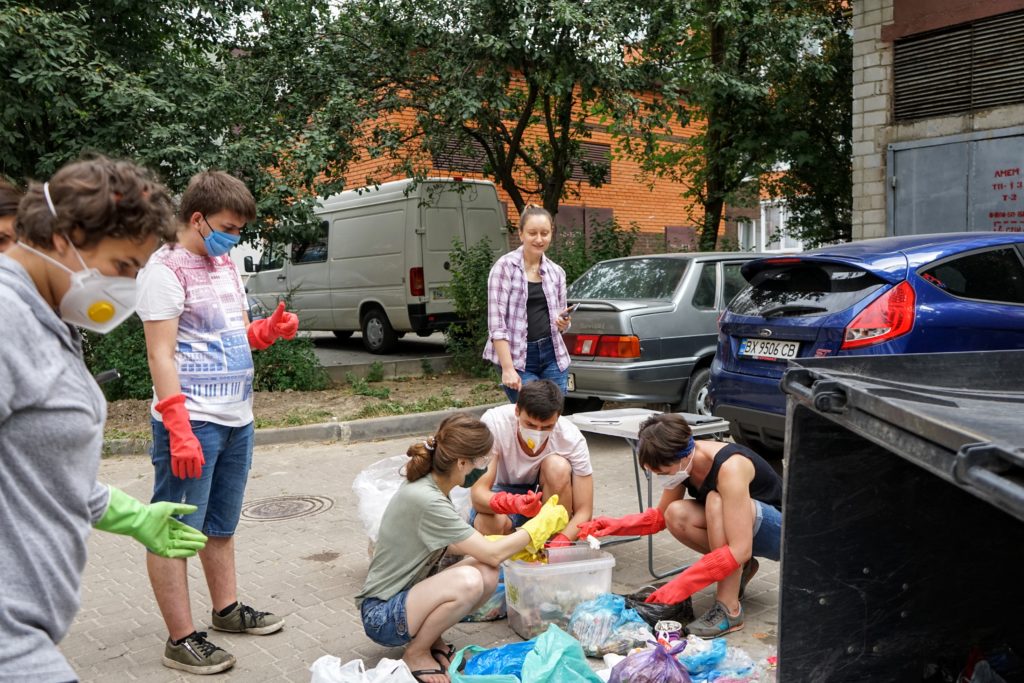 Despite the reduction in tourism and the closure of the hospitality sector, we found that waste generation in the studied cities has not decreased significantly. According to the officials in Lviv, the amount of waste in the city centre decreased by 60% but increased by 30% in residential areas. The situation was similar in Poltava. Even in Truskavets, where the number of tourists and visitors often significantly exceeds the local population, the total amount of waste has not changed. Only in Myrhorod did the amount of waste decrease, by 40%, which one respondent noted as the result of popular local health centres closing.

As the duration of lockdown went on, the local population that we studied began to increasingly choose packaged products. This was reported by representatives of the trade sector, citing statistics on the turnover of goods in retail chains, and noted that, most likely, such a change in behavior is associated with a decrease in the purchasing power of the population.

The introduction of the lockdown in mid-March has provoked a flurry of demand for certain foods – cereals, including buckwheat, relatively long-term storage vegetables (including potatoes), and more. Rising prices for the latter could also reflect declining supply in large cities due to transport restrictions and the banning of wholesale markets. As a result, more and more plastic packaging ended up in the landfill due to the fact that the vast majority of this kind of packaging cannot be recycled.

Also, the volume of single-use packaging waste increased due to the popularisation of delivery services for both ready meals and grocery kits from supermarkets, as well as takeaway food services. One of the first orders of the Ministry of Health of Ukraine, which regulates the activities of food trade establishments, was the requirement to pack vegetables, fruits and other goods by weight in disposable plastic bags, justified by ‘health and security reasons, rather than any scientific justification. This decision has led to an increase in the widespread myth that disposable or plastic packaging is safer and more hygienic to use than other alternatives.

There is still an opinion among the population and businesses that disposable plastic transmits less viral contaminants and does not transmit pathogens. As recent evidence shows, there is no evidence that single-use packaging contributes to the spread of the virus any less or more than reusables. Given that the concept of “zero waste” in Lviv began to be implemented in 2017, the Zero Waste Lviv team managed to influence the orders of local authorities, as a result of which guests were allowed to serve summer terraces, using reusable utensils, although the Ministry of Health recommended the use of only disposable. However, we continued to notice such progress still in Lviv.

3 – The amount of recyclables in public containers increased

During the lockdown, recycling points were closed, so the number of recyclables collected by the informal sector (homeless, pensioners and low-income persons who collect recyclables to earn extra money) from public containers decreased., resulting in an increased volume of recyclable materials that local authorities had to manage. This situation arose because the recycling points in Ukraine were left out of sight by the authorities and were not included in the lists of enterprises whose operating regimes were considered by the local anti-COVID-19 headquarters. Accordingly, once released from the list, they did not work at all for the first weeks, then after weakening and in the absence of clear requirements for them, began to take recyclables. 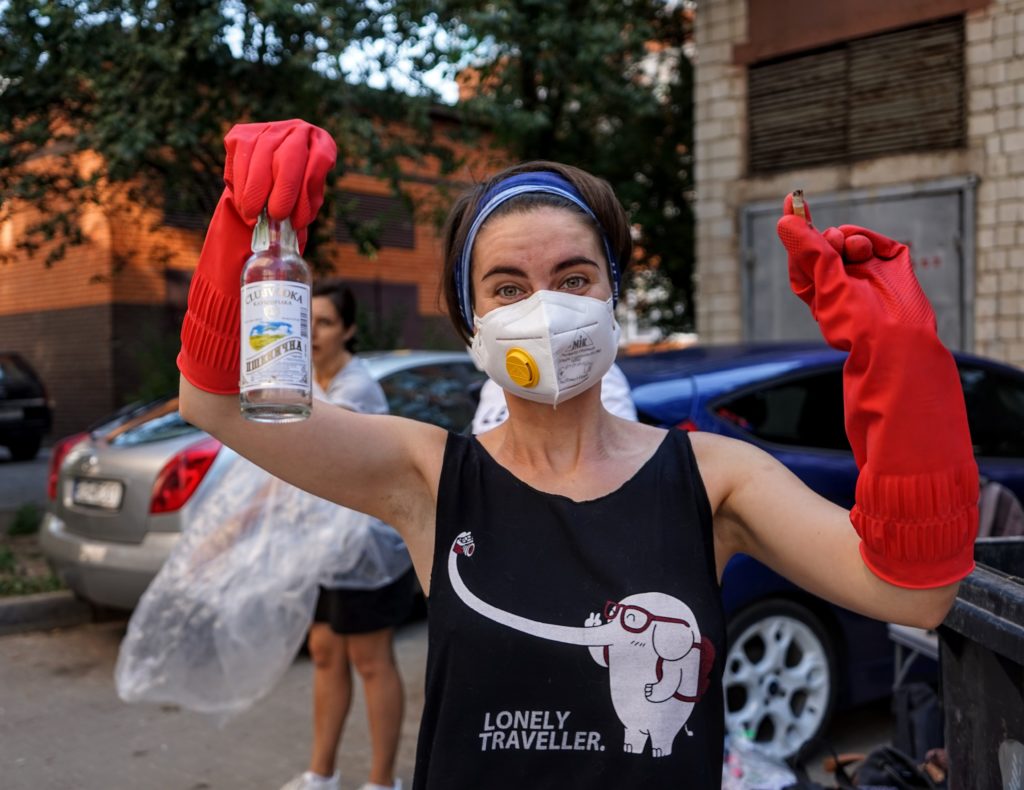 4 – Emergence of a new type of waste: pandemic waste

This includes both personal protective equipment – used masks, respirators, gloves, wet wipes, antiseptics – and their packaging. Moreover, wearing gloves in supermarkets, on public transport and in other public places also increased, sometimes pushed as a local initiative of the Ukrainian authorities. With increasing demand for antiseptics, the use of various chemicals required for their manufacture has increased too. There is a separate issue of the use of certain chemicals, which are not always indicated on the packaging of the antiseptic.

The Ministry of Health’s recommendations on the need to separately collect and dispose of used masks and gloves from the public also have no evidence base. If a person is not in contact or sick, then there is no need to dispose of such PPE.

5 – More than 50% of residual waste was organics

During the waste assessment analysis, we determined that about half of the composition of containers with mixed waste is organic waste (food and green). This is due not only to seasonality – we conducted the study in August-September, when the share of organic waste due to the large number of seasonal vegetables and fruits automatically becomes higher – but also to the fact that people began to cook more at home. Also, from the beginning of the lockdown restrictions, the recommendations on mandatory packaging of vegetables, fruits, bread and groceries in polyethylene came into force. This caused accelerated spoilage of the products: due to the fact that the vegetables and fruits were in closed, tied bags without access to air which accelerated the spoilage process.

6 – Increasing the amount of construction waste and total decluttering

An increase in bulky waste by households was also noted and can be linked to the general trend of decluttering and cleaning.Due to the fact that the introduction of strict lockdown has given the population extra time, many have spent it cleaning and doing minor repairs within their households. Consequently, old furniture, wallpaper, scrap and other materials linked to construction waste appeared on the container sights, the removal of which also fell on the carriers.

Based on the research and data gained throughout this process, the project team offers the following recommendations for local authorities responsible for waste management.

1- Improve the collection of data on solid waste generated in the city, in particular, focusing specifically on:

2 – Ensure that this data is open and publicly accessible 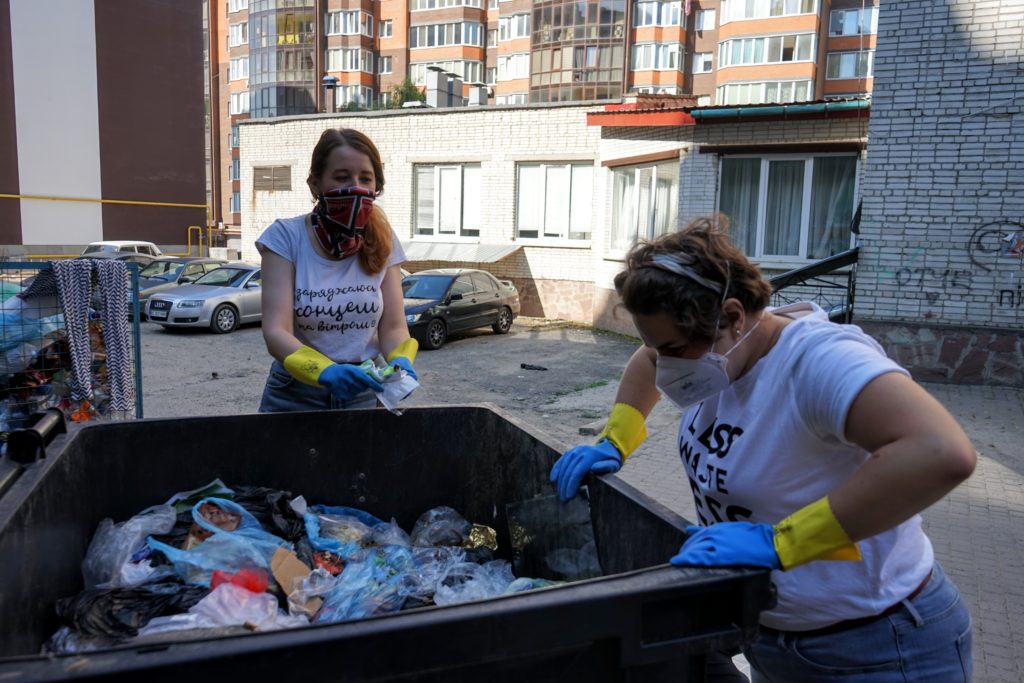 Recommendations for organising the collection of solid waste

Introduce the separate collection of organic waste and create opportunities for centralized and decentralized composting, or anaerobic digestion to produce biogas if relevant.

An English version of the research can be found here.

For further information on the project, the methodology we used or the results, please contact Zero Waste Lviv team at [email protected]