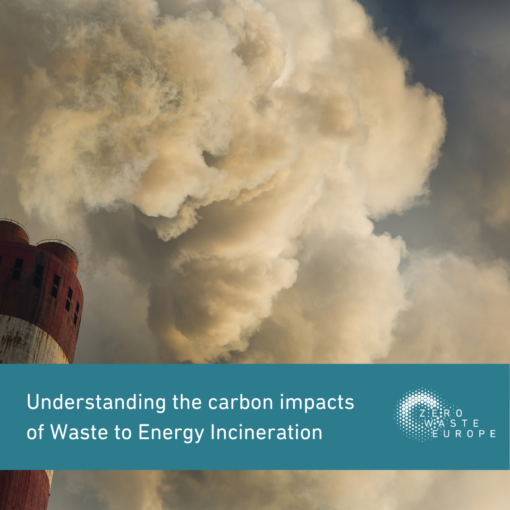 Understanding the carbon impacts of Waste to Energy incineration

In 2015, world leaders agreed in Paris to the most ambitious plan yet to tackle climate change. In light of that agreement and its goal to keep global temperatures below a 1.5°C increase, Waste to Energy incineration (WTE) has sometimes been proposed as a way to decarbonise waste management as well as the energy sector. But Waste-to-Energy is far from being carbon-free.

Across Europe, Waste to Energy incineration is promoted, by some, as an alternative to landfilling for the treatment of waste. According to Eurostat, in the 10 years running up to 2016, the amount of waste incinerated increased by 30% [1]. The data also reveals that in the last 10 years CO2 emissions from incinerators have doubled. In 2017, over 40Mt of fossil CO2 was released by WTE incinerators in the EU 28 countries [2].

The CO2 emitted per tonne of waste incinerated depends on the composition of the waste. Eurostat statistics show that the majority of the increase in waste incinerated comes from so-called residual municipal solid waste (MSW) which produces significant amounts of CO2.

Each tonne of MSW incinerated typically releases between 0.7 and 1.7 tonnes of CO2 [3]. This includes emissions of both fossil CO2 (e.g. from burning plastics) and biogenic CO2 (e.g. from burning wood, paper and food). Although biogenic CO2 is directly released into the atmosphere making a significant contribution to climate change, only the CO2 emissions from fossil sources will be considered for the purposes of a global analysis – an important loophole in GHG emissions accountability.

On top of this, evidence indicates that more than half of what is currently being incinerated could have been recycled or composted [4], suggesting that much of Europe’s WTE incineration capacity is being used to burn valuable resources that could have had a better environmental outcome. WTE incineration is proving to be a barrier to improving recycling rates and it creates a need to replace these resources at a high environmental cost, and that cost is not included in the Eurostat figures.

The carbon intensity of European incinerators is a significant (540gr CO2/kWh)[4], around twice the concentration of CO2 emissions derived from the average EU electricity grid (296gr CO2/kWh) [5] and significantly greater than the energy produced through conventional fossil fuel sources such as gas.

Since these infrastructures are meant to last for about 20-30 years, continued use of incineration is simply delaying a much needed, and urgent, transition to less carbon-intensive power generation infrastructures such as wind and solar renewable energy whilst also undermining the move to lower-carbon options for waste management, including the re-design of products to increase recyclability and longevity.

It would be environmentally irresponsible to continue to promote Waste to Energy infrastructures that are already largely outperformed by the EU average and even worse, by conventional fossil fuel energy generation such as gas. For countries across the world to best meet their obligations under the Paris Agreement, it’s clear that decarbonisation must happen across all sectors. Specifically, that means that they should call for a phase out of incineration practices, to be replaced with genuinely climate-positive waste management ones, and for those countries not yet hooked on waste incineration, a commitment to avoid this practise going forwards. NOTE: