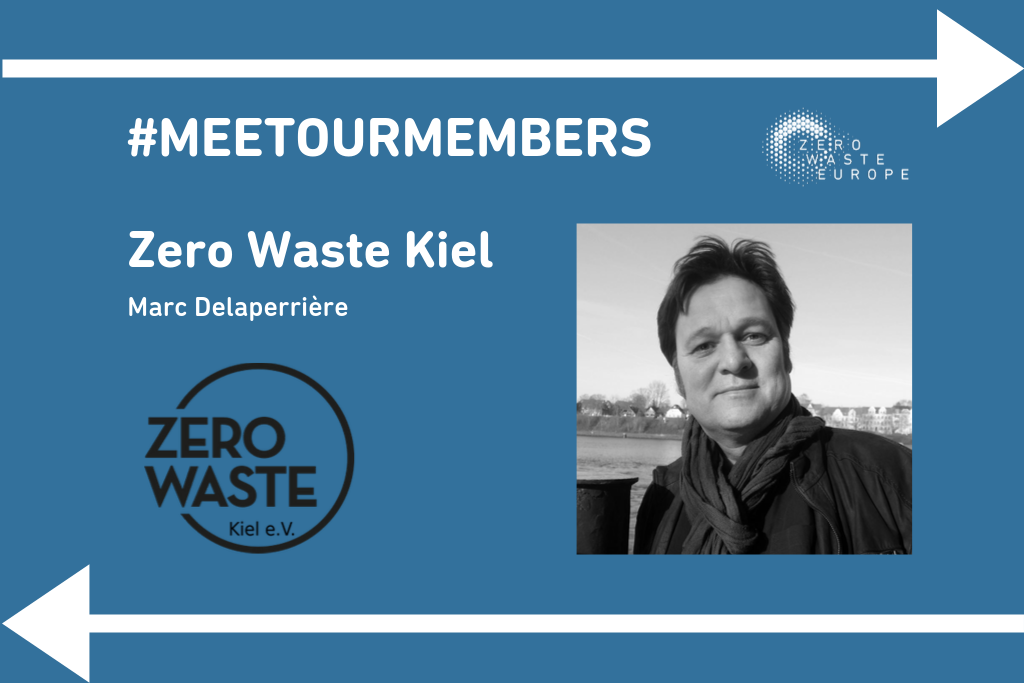 Hi Marc, can you give us a brief introduction to Zero Waste Kiel e.V.?

Hi, of course! Zero Waste Kiel e.V. was founded in 2016 and has been a member of the Zero Waste Europe Network since 2017. Kiel is a German coastal city by the Baltic sea. In total we are about forty volunteers, of various profiles and ages: supporters of the cause, active campaigners and experts with knowledge of waste management systems. The association meets twice a month to discuss upcoming and ongoing projects.

We promote the zero waste vision across many areas: lifestyle, cities, communities, architecture, hobbies, education and businesses. We focus on waste reduction at its source and promote waste-free alternatives and solutions. Our goal is to raise awareness on waste prevention practices proving that zero waste does not mean privation from things, but instead it means rethinking consumption patterns to have a positive impact on the environment, on people’s lives, and society.

For me, waste is an environmental issue like any other. I really started to get into it when Marie, my wife, started her zero waste grocery project, which opened in 2014. So it is Marie, herself inspired by Bea Johnson’s book, who is to blame.

We similarly tried  to implement the zero waste experience at home. Very quickly, it became a family affair, also involving the children.  In a short period of time, we were able to reduce a large percentage of our household waste. The process is still ongoing, step by step, without becoming too strict (this is important). Thanks to this personal adventure and the bulk grocery store, our relationship to waste and resources has shifted: it is no longer just a matter of putting things in a garbage bin to make them disappear. We are conscious of our waste: will it be recycled, burned, landfilled on shipped to the other side of the world ? We developed new relationships with objects and resources: keeping them longer, repairing them as far as possible, and taking their full life cycle into account. Alongside  a group of friends who shared similar concerns Zero Waste Kiel was born.

Waste is a glitch in our society before being a technical issue. Expert or not, anyone can tackle waste at his or her own level!

Officially, I am the treasurer: mainly because no one wanted to do the often ungrateful job! Luckily, a zero waste association and its projects can be managed with low budget…

My unofficial functions are multiple: I take care of communication and the webpage, I support my wife in her “chairwoman” role, I monitor or accompany some projects of the association, and get involved in working groups throughout the network such as the one on the Zero Waste label of Zero Waste Europe.

Well, I can tell you about three main projects:

We motivated the municipality of Kiel to begin its zero waste journey in 2018. Kiel already had a climate plan and the municipality partnered with San Francisco, the first zero waste city in the world.  Thus, in 2018 we co-organized a conference called  “Kiel 2019: a milestone for ZW cities in Germany” alongside Zero Waste Europe.

The municipality is currently drafting its zero waste concept with the Wuppertal Institute, and we expect the commitment to come in April 2020. We will continue to support them in this process, proposing ideas and drawing on best practice examples.

A recent action was  developed in cooperation with the team of “Waterkant” festival to implement a systematic approach to waste reduction. Waterkant is a festival of start-ups and innovative projects in our region, Schleswig Holstein. Thanks to the motivation and willingness of the waterkant team, who were very committed to sustainability, the festival was a real success. Currently, we are approaching other groups to repeat the experience, while internally refining our coaching techniques.

We created a label (see photo…) to give local food stores and market stands the chance to advertise that they accept customers’ containers. However, such an initiative is not unique to Germany, as associations in Münich, Hamburg and Berlin use similar concepts. This project involved outlining prerequisites and procedures for stores to follow, which were all accepted and validated by health authorities.. Already in Kiel, several shops are participating!

Across Germany, we called on other groups to join a zero waste network, not only for German organisations but also as members of  Zero Waste Europe. This way, we are able to share a common zero waste definition, while benefiting from one another’s experiences in Germany and abroad.

Building a network takes time, as each group focuses first on its own projects and actions, but we are confident that this will be successful going forward: so far, 7 groups are already part of the initiative.

The “zero waste movement” is relatively new here, I would say it started around 6 or 7 years ago. This is not to say that some environmental NGOs have not previously addressed the waste issue: they have been doing so for decades under the term “Müllvermeidung” (literally; avoiding waste). But perhaps the new more attractive wording, combined with the  minimalist, fresh and mentally healthy lifestyle image, unpackaged grocery movement, blogger and media support has all contributed to making “zero waste” a trend. Many more, or less, structured groups are being created to focus on the idea of zero waste. Like our organization, they first explore lifestyle aspects, then explore other zero waste areas and finally come to ask questions about the roots of waste management to address all stages of the waste hierarchy.

Thus, the movement is flourishing, maturing, and the messages that have been formulated over the past 40 years by NGOs and experts (in the same way it’s happening within the climate movement ) are finding new ears and a wide audience reaching municipalities and politicians alike…. This is very positive. The coming years will, I believe, see the movement become more structured and effective as a result.

You can find more about Zero Waste Kiel e.V., and their work here.