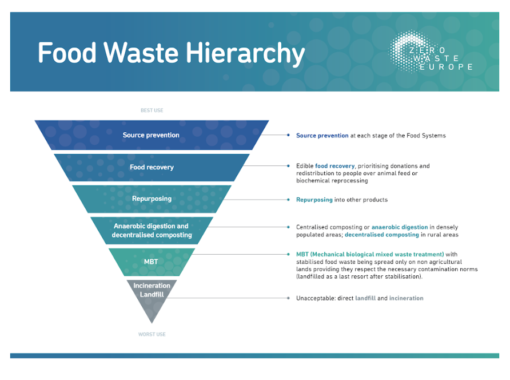 Too Precious for the Bin: a Recipe for Food Waste Prevention!

Too Precious for the Bin: a Recipe for Food Waste Prevention!

With the recent update of the Waste Framework Directive, the European Parliament and the Council of the European Union have established a new definition of “food waste”. Indeed, food waste is any food, and inedible parts of food, removed from the food supply chain to be recovered or disposed (including composted, crops ploughed in/not harvested, anaerobic digestion, bio-energy production, co-generation, incineration, disposal to sewer, landfill or discarded to sea).

Food waste is at the core of a social, ethic and environmental systemic crisis that requires to reshape our food production and consumption habits.

Globally, approximately a third of all food produced for human consumption is lost or wasted while more than 10% of the world’s population is suffering from undernourishment. Data speak for themselves. Especially when compared to the rest of the world, food waste in Europe is especially challenging. Indeed, in the EU an average of 88 million tons of food are wasted every year, equating to 173 kg of food waste per person, while the ratio in Africa and South East Asia is 6-11 kg/person/year. Moreover, overall an estimated 20% of the total food produced is lost or wasted, while over 42 million people cannot afford a quality meal every second day. In addition, in Europe the costs associated to food waste are estimated at around 143 billion euro, generating around 8% of the annual greenhouse gas emissions and a loss of 24 billion metric tons of fertile soils every year.

How can we waste so much? To answer this question, we need to take a closer look at the whole food supply chain. When we talk about food waste, we do not only mean what we, as consumers, throw away, but also what stores, restaurants, and hotels don’t sell and then discard and what manufacturers and farmers lose along the way.

Tackling food waste has become a high priority on the European agenda. This represents the first step for the creation of efficient and effective policies in order to reach the SDG’s target of halving per capita food waste at the retail and consumer level by 2030 and reduce food losses along the food production and supply chains. However, an effective strategy to tackle food waste must cover the whole food system from crop to compost, as the losses often begin at the earliest stages of production. For its specificity and potential outputs, food waste is very different from other types of waste. Indeed, when we throw food away, we are also getting rid of all the resources used in its production. Therefore, tackling food waste makes it necessary to create a particular and unique waste hierarchy.

The definition of this hierarchy is a preliminary and necessary step in order to address the issue and create an effective guideline for food waste policies. Such hierarchy covers six stages: source prevention, food redistribution, repurposing, anaerobic digestion and decentralised composting, MBT (Mechanical Biological mixed waste Treatment) and Incineration. In accordance with these stages, food waste policies should aim at boosting food waste prevention, improving food donation and fostering treatment of unsold food.

2 – Food donation and redistribution. When food cannot be consumed for its primary purpose, food donations should be made easier for all the stakeholders involved in the food system through fiscal incentives and supportive funding.

3 – Treatment of unsold and non-donated food. When food cannot be eaten, it should be properly treated according to the waste hierarchy. How? For example, by making jam out of damaged fruits. This way, food waste is repurposed by selling it through alternatives channels.

Reducing food waste and making it a priority, therefore, means moving towards better, fairer and more sustainable production and consumption methods. In spite of the recent ambitions displayed at the EU level, one can only regret the decision not to include “harvest food” in the freshly adopted common methodology for food waste measurement. This is the sign that good progress has been made but still needs to be translated into concrete and ambitious measures during the next mandate taking into account 2 key points:

In that perspective, Zero Waste Europe has compiled a set of key recommendations aimed at helping policy-makers to adopt new legislation to highly reduce food waste and promoting a Zero Waste society.