Beyond single-use plastic: a new era for European businesses is within reach 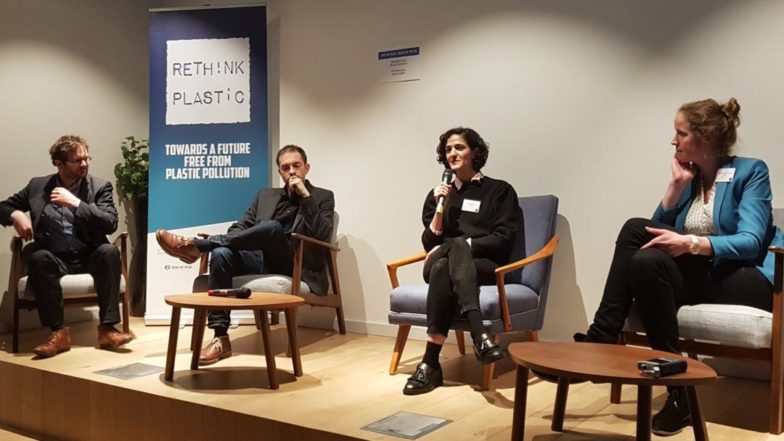 Beyond single-use plastic: a new era for European businesses is within reach

With a true concept night, Rethink Plastic took participants into the future to explore the opportunities of a post-single-use plastic society

On March 27th, Rethink Plastic hosted its second talk show in Brussels, in a museum-like environment taking visitors straight into a plastic-free future.

Following the success of its November edition on plastic waste exports, Rethink Plastic struck again with a true concept night, this time looking at how the EU can legislate on single-use plastics and enter a new business era. The discussion was a perfect occasion to address the impact of EU legislation on plastics on the European economy and job market. The event was moderated by Green Exchange.

A diverse panel of speakers including entrepreneurs, innovators, policy makers and campaigners came together to discuss a new perspective. The outcome? Alternative solutions exist; new economic models are already proving successful, moving away from the corporate products monopolies – that are packaging intensive – back to more local and resilient economies based on services and short supply chains; and EU policy have a role to play.

The discussion took place in a venue staged as a fictive museum of the future, exhibiting wasteful products used in the early 21st century – a time when societies were using excessive amounts of single-use plastics.

Taking a tour of the venue you could learn about “Legacy of the EU Commission 2014 -2019”, “The ten most littered items in 2017” or how those products of the past were successfully replaced by new designs and services that better fitted the “smart lifestyle”.

Welcome to the future, and to the museum of #singleuseplastic! "People were cleaning their ears with #plastics and flushing it down the loo, can you believe it?" explains our @Emma_Priestland ???? #RethinkPlastic pic.twitter.com/iiUpRQU9z9

A trip to the past: how we used to live in Europe in 2018. Beautiful ‘museum of #SingleUsePlastics’ at @RethinkPlastic’s talk show tonight – follow them now for the livestream! pic.twitter.com/WJVsmQcz8t

Jan Berbee told the story of RePack, a reusable packaging solution for e-commerce. Apparently, this one is a story about love.

"#Plastic #packaging is a story of #love & #hate" says @jan_berbee at #Rethinkplastic's talk show.
How can we minimise #waste & go for pure love? @OriginalRePack has a solution! pic.twitter.com/nDzdQUzd6U

Sanderine van Odijk, Senior Venture Builder at Enviu, explained how “building impact ventures as positive and scalable examples of change will allow to break the current patterns of linear consumption and move to a circular and inclusive economy”.

Alexandre Garcin, Deputy Mayor of the French city of Roubaix, illustrated how the transition towards zero waste is benefiting the local economy.

"What we need from the EU is better economic incentives & regulation to internalise negative externalities" says @AlexandreGarcin, Deputy Mayor of the #zerowaste city of Roubaix #RethinkPlastic #ZeroWasteCities #singleuseplastics pic.twitter.com/K0t1Gohycq

The third and last session focused on the role EU policy can play in preparing the business sector for the post-single-use plastic era.

Zero Waste Europe’s Ariadna Rodrigo highlighted how, although many business alternatives to single-use plastic are already available, the legislative framework and the economic incentives are not in place yet to allow them to compete with the existing wasteful business models.

"The EU needs to rethink how it uses its money. We must invest in #business models that promote alternatives to #singleuseplastic and help them flourish!" says our @AriRodrigo at #RethinkPlastic's talkshow. pic.twitter.com/xJ7BbJFgnr

Member of the European Parliament Heidi Hautala stressed the importance for EU institutions and Member States to take ambitious legislative action, and supported the idea of economic incentives as well as bans on a range of wasteful single-use products.

"Economic incentives and bans on #singleuseplastics can really open the floor to innovative alternatives" says @HeidiHautala at #RethinkPlastic talk show "and unfortunately we are still lacking this!" pic.twitter.com/d7gHuZJadU

Grzegorz Radziejewski, Advisor to the Commission’s Vice President Jyrki Katainen, ackowledged the success of the plastic bag directive, which should inspire the upcoming legislation on single-use plastic, and stressed the importance of backing the legislative proposal with solid data.

Delphine Lévi Alvarès, coordinator of the Rethink Plastic alliance, concluded by calling for an ambitious legal framework to allow the existing virtuous solutions to go mainstream and cross-sectoral.

Change really is within reach, and the transition to a post-single-use plastic era can bring new jobs and a thriving economy. Whether the EU will seize the opportunity, will depend on the vision its decision-makers will adopt as early as this spring, when tabling their legislative proposal, together with the right investment vehicles and economic incentives, needless to say.