“Deliver or pay”, or how waste incineration causes recycling to slow down 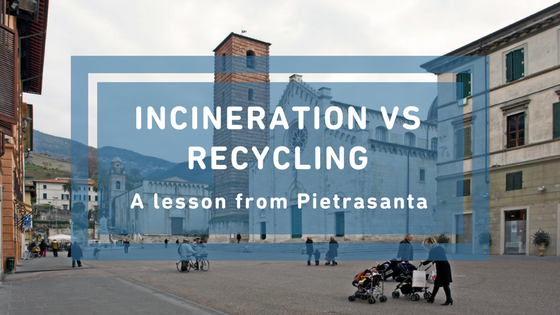 Is incineration compatible with recycling?

A common argument in the past has been that we could recycle as much of the waste as possible and burn what remains. In reality, however, incineration can discourage recycling. Here’s why.

In Europe, burning waste in the so-called “waste-to-energy” plants is an increasingly common practice. About a quarter of all municipal solid waste is burned in 450 incinerators in mostly central, northern and western European Member States. This practice is often presented as  a sustainable option to manage municipal waste. But trash is not a renewable resource. Producing resources that end up as waste requires great amounts of energy, which can be saved by recycling the materials instead of extracting virgin ones. Recycling is also more profitable and creates more jobs than incineration. From an environmental as well as social point of view, there is no doubt that recycling is the best method for dealing with waste.

How incineration is slowing recycling down

Incinerators are expensive to build, so in order to make profit and repay the investment costs, they need a guaranteed stream of waste. Therefore, “waste-to-energy” plants require municipalities to sign long-term contracts compelling them to deliver a minimum quantity of waste for 20 to 30 years, or pay fees to compensate the incinerator company for lost profits. With such contracts in place, municipalities commit to generating a certain amount of waste, instead of decreasing that amount while increasing their recycling rate.

A remarkable case from Italy illustrates this problem in practice. In 2002 a medium sized incinerator in Pietrasanta was built by the order of the regional government of Tuscany without the approval of the surrounding municipalities. The incinerator was managed by the private firm Veolia for 7,5 years, until it was shut down in July 2010. The main reason for closing down the plant was the violation of environmental standards, mostly due to inappropriate wastewater treatment.

However, during the operation, there was a conflict between the 6 municipalities and the plant management due to the “deliver or pay” contracts imposed by the regional government.

Municipalities had implemented a door-to-door separate collection scheme in line with European Waste Framework Directive in order to meet national recycling targets of 65%. Separate collection in the municipalities had therefore reduced the amount of dry waste below the minimum of 10 000 tons per year – the minimum quantity stated in the contracts. In response, the plant management demanded a total of 13 million Euros to be paid by the municipalities, which started a legal war between the years of 2010 to 2015. The municipalities, trapped in a lose-lose situation, ended up paying 5 million Euros of fines due to their unfulfilled contractual obligations, just because they had successfully implemented separate collection of waste.

Such cases are increasingly common around Europe, and especially in the United Kingdom.

In Nottinghamshire, the County Council refused separate food waste collection in order to avoid the fines for not meeting the waste delivery targets for incineration. Another City Council in Stoke-on-Trent has been fined for delivering lower than minimum waste tonnage levels at their local incinerator. In Derby the recycling rate have fallen from 42% to 31% over a course of a year, due to specific provisions on the composition of the waste in the contract with the waste burning plant, which encouraged the incineration of recyclable and compostable material.

The situation in the EU, and what the European Parliament can do about it

Because of misconceptions and sometimes poorly transparent decision making process, incineration is unfortunately still a common practice around Europe. Every year less than 40% of waste is recycled or reused, whereas up to 90% recycling should be attainable. Instead of selling the recyclables for reuse, which would be both economically and environmentally efficient, the “deliver or pay” contracts require municipalities to burn valuable resources. This approach is counter intuitive to the already modest European waste reduction targets for 2020. Not to mention that recycling saves massive amounts of CO₂ emission and can play an important role in meeting the objectives on climate change as set in the Paris Agreement. We currently burn 81 million tons of waste in EU every year. There is a potential to reduce the amount of waste to 25 million tons per year, if we implement proposed zero waste and circular economy plans, as many cities have already done. By 2030, EU’s incineration capacity could be reduced by 75% when all European cities would repair, reuse or recycle at least 85% of their materials, like Treviso does today. If we want to increase the recycling rate we need to stop financing incineration now.

The European Parliament is currently discussing the European Directive on Renewable Energy. RED II will be implemented in the following decade, influencing the choices of local policy makers and financial investors. It’s important that financial support for renewables is in line with the recommendations of Commission’s communication on waste to energy to phase   out   support   schemes   for   waste   incineration. The European Parliament’s Committee on Industry, Research and Energy (ITRE) will vote on the issue of renewable energy support schemes for energy from mixed wastes on November 28th.

Claims that recycling and incineration are compatible practices are misleading, as incineration stifles recycling. “Deliver or pay” contracts cause a lock-in effect and hamper efforts on reduction and separate collection, hence are in conflict with the European environmental objectives.“Incinerators are expensive to build, so in order to make profit and repay the investment costs, they need a guaranteed stream of waste“