Cleaning our way out of our plastic crisis: coastal cleanups and beyond 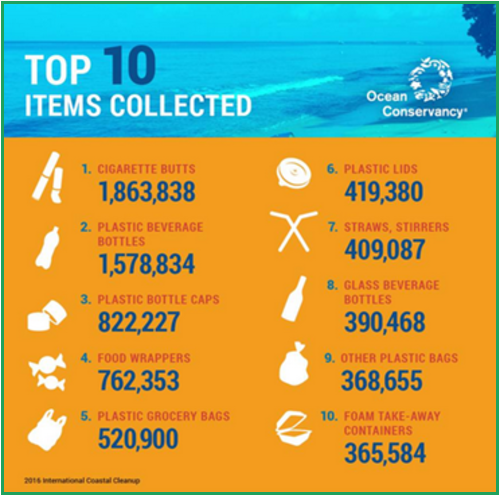 Save the date! The 16th September 2017 is the International Coastal Cleanup Day. From an activity previously only carried out by a small group of  ecological front runners, coastal cleanups have become a big deal. Last year, a large US-based network involved almost 800,000 volunteers internationally and, since launching in 1985,  claims to have involved more than 12 million people in the cleanup effort. According to the survey by  Ocean Conservancy, over 8 million kilograms of trash were collected last year. During 2016, the top three items collected were cigarette butts (almost two million), plastic beverage bottles (just over one and half million ) and plastic bottle caps (over eight hundred thousand).

Are coastal cleanups the solution to the litter problem?

It is undeniable that coastal cleanups can work as a tool for awareness raising, since they  highlight how a significant amount of marine litter is created by our day-to-day products. It also demonstrates the sheer volume of plastics in the sea. Indeed, it is claimed that  by 2050 there will be more plastics than fish in the sea, and many of us are familiar with the pictures of sea life with stomachs full of plastic. What the debate does not cover enough is the economic consequences.

At this time, the spending on marine litter is most often used to cover the removal  of debris or recovering damage which marine debris has caused. This expenditure represents treatment of symptoms rather than cure. Conversely, the real impacts go beyond this as they include damage to other economic activities, such as the fishing or tourism industry. Hence, although probably cheaper than inaction, recent estimates show that such cleanups are not  a strategy fit for the future.

On the one hand, plastic consumption levels play a big role in the whole picture of plastic litter both in the marine and the land environment, and they needs to be addressed. On the other hand, plastic production plays a role as big as, or even bigger than, that of consumption. The industry is the upstream source of marine litter and it must be regulated. Hence, governmental legislation can  help in reducing plastic pollution. The European Commission is expected to publish a Plastic Strategy in December 2017 and a movement is gearing up to demand an ambitious strategy, in particular with regards to a legally binding target on the reduction of plastic use.

How can we reduce plastic use in Europe?

An initial step would be to start reducing the production of single-use plastics, since in most cases alternatives already exist. For example, grocery shops selling locally sourced food and drink products in bulk, where local residents can buy pasta, wine, oil and many other necessities without having to throw away any packaging. This kind of business is getting more and more profitable not only in cities, but also in towns and villages. It is usually the result of proactive political nudges in the right direction, leading to residents becoming aware of and able to implement virtuous consumption habits.
Shortly, a substantial part of the civil society, made of individuals, business and organisations is already embarked upon the effort of reducing plastic overconsumption. Now it is time for governments to let these seeds sprout.