4 reasons why recycling is better than incineration 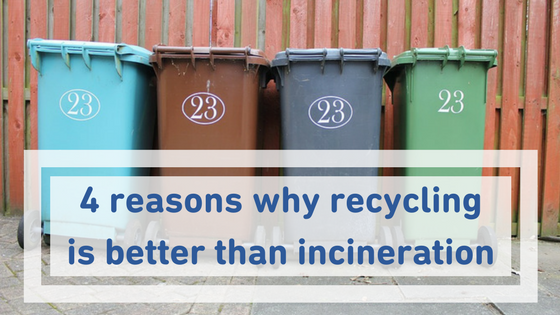 The waste hierarchy is the main principle at the cornerstone of the European Union’s waste policy. It establishes the priority order Member States should apply when developing waste management legislation and policy. It envisions that waste should be in the first place prevented, then  reused, recycled, processed for energy recovery, and finally disposed of.

Unfortunately, although waste prevention represents the top priority of the waste hierarchy, effective waste measures of this kind have rarely been yet developed by Member States. This delay in the implementation of the waste hierarchy principles is in part due to the lack of consistency among national waste policies: on the one hand, there are principles and other non-binding tools to promote more sustainability-oriented practices; on the other hand, Member States are free to subsidise the activity of burning mixed municipal waste, known as incineration.

When waste is not subjected to separate collection, it is called mixed or residual waste. This means that many materials (plastics, paper, organics), which could be recycled if they were separated at the source, are inexorably lost, because they will be burnt into incineration facilities.

The European Parliament is currently amending the European Directive on Renewable Energy, which will be implemented in the following decade. The legislation that emerges from this process will influence the choices of local policy makers and financial investors. This represents a major opportunity to offset unproductive investments and concentrate the efforts on the options that are the most sustainable, the most profitable, and generate the most jobs. In all these aspects, recycling makes much more sense than incineration, and here is why.

The practice of incineration is bad for several reasons. On the first hand, it disincentivises citizens to care about what they consume. This is very dangerous in a world where more than 7 billion people live out of finite resources.

Not very long ago, recycling was considered difficult, even impossible, according to the most skepticals. However, nowadays recyclers run a business of millions of euros, while preserving materials in the economic loop. A combination of recycling and composting can save three to four times more energy than an incinerator can produce. 1

Moreover, recycling saves massive amounts of CO2 emissions and, if optimised, it can play key role in meeting the objectives set out in the Paris Agreement to contrast climate change. 2

Finally, when “embedded energy” is taken into account as an indicator (which, unfortunately, is not the case in many Life Cycle Assessments), the amount of energy that a high-quality recycling can potentially saves is astonishing when compared to incineration, as pointed out in a recent study.

Incineration of mixed municipal waste is an expensive practice which requires significant financial investments from local authorities. Unfortunately, the costs to build the facilities and to run them are are covered mainly by public funds with very little private contribution.  Therefore, its costs are, in reality, to be paid by the citizens through higher taxes and bills for waste management.

On the contrary, the recycling sector has developed into a successful business. In Germany, its turnover increased by 520 per cent between 2005 and 2009.3 Agreeing to take the path to maximize recycling is particularly important for those countries that joined the EU recently and are currently building their waste management system. They have also the most to gain in terms of jobs and savings.

Burning waste requires a lot of money but very little workforce. This means that incineration facilities create almost no jobs.

On the contrary, recycling benefits the whole economy by creatingat least ten times more jobs than landfilling or incineration. 4

Here are a few examples:

It is estimated that, in addition to the nearly 400 000 direct jobs brought by the implementation of the existing EU waste legislation, 170 000 more jobs could be created, most of them impossible to delocalise outside the EU, and 30 billion euro could be saved by 2035. 6

When comparing the costs, one can see how good management and recycling save money for the taxpayers and create real and tangible wealth.

4. Recycling is more flexible and dynamic

Finally, the technology involved in incineration is neither efficient nor exempt from problems: in Denmark, the kingdom of incinerators, the sudden breakdown of one of the two incinerators forced the operator to apply for an extraordinary permit to store huge quantities of waste. Needless to say, the breakdown costed approximately €15 million to the operator who will likely swap the bill to the taxpayers.

Incinerators are not flexible. This means that, in order to deliver a sound economic profit, they need from 40 to 50 years of activity, without taking into account the management costs. In 1998, when the UK’s Kent County entered into a twenty-five-year contract to burn waste, it thought it was making a wise economic move. But now, as the recycling economy has vastly improved, the County is losing an estimated €1.5 million a year.7 Rather than selling its recyclables for reuse, which would be both economically and environmentally efficient, it must send those valuable resources up in smoke. That is an unfortunate situation that will persist until the contract expires.

On the contrary, re-use and recycling activities are not only environmentally friendly, but they also deliver a far better result from the economic and social point of view.

Nevertheless, because of misconceptions and sometimes poorly transparent decision making process, incineration still represent a serious threat, while every year less than 40% of European waste is recycled or re-used. The best way to invert this trend is to implement effective source separation (of waste) and separate collection schemes. By doing that, it is possible to boost the percentage of recycling and the quality of recyclates, thus creating an added value for society and the environment, and finally moving beyond the practice of mixed waste incineration for good.

7 P. Connet, The Zero Waste Solution. Untrashing the Planet One Community at a Time, Paul Connet, 2013.