Nepal: Waste and Transformation in the Himalayas 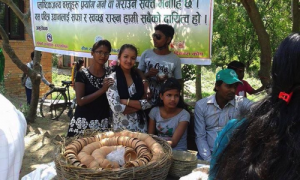 It wasn’t too long ago that a popular movement ousted a 250 year old monarchy to establish the Democratic Republic of Nepal. For this Himalayan mountain nation, its been a difficult transition as they continue to struggle to find political consensus on a federal constitution. It is not easy being surrounded by geopolitical behemoths like China and India, or being an eco-tourism destination whose highest mountain in the world, Everest, has been turned into the world’s highest garbage dump.

However, amidst these challenges, there are a handful of shining lights that show transformative pathways of economic progress and ecological justice in this land of a thousand Buddhas. From replacing plastic with traditional leaf plates to installing a biodigestor in a local hospital, communities in the Himalayas are using a unique mix of old customs and new initiatives to embark on the road to zero waste.

Global Alliance for Incinerator Alternatives (GAIA) staff have just returned from a tour across the Himalayas, where members of the Zero Waste Himalayas network have been organizing community-based initiatives to reduce waste, reduce plastics pollution and improve local livelihoods. At GAIA, we believe that the world’s ecological crises are best addressed through local economic solutions that are developed, owned, and controlled by the communities and workers at the frontlines of these crises.

At the Boudhya Zero Waste Center in Kathmandu, we joined a women’s collective making bags from old newspapers, sharing stories, songs and a few laughs through our blended efforts to communicate in Hindi,

English and Nepali. From their organizing stories, we learnt about the material realities and economic constraints that challenge the reduce, reuse and recycling of Kathmandu’s discards. Pragya Seeds, a local NGO working on zero waste and environmental justice, has been organizing a number of these community efforts.

At the Lord Buddha Secondary School, a group of Class 8 & 9 students have been source separating paper, plastics and organic waste for composting. In talking to us about their activities, these students expertly connected the dots between local recycling and composting practices, and global concerns of climate change, ecosystem health and sustainable food production.

In Lumbini, the birthplace of the Buddha, we found a new generation of community leaders amongst the Green Youth of Lumbini – epitomizing why the future of planetary well-being clearly lies in the hands of the youth.

The Buddha (Siddhartha Gautama) was born a crown prince of the kingdom of Kapilavastu in 623 BC. Later in life, after renouncing imperialism and the throne, the Buddha became one of the earliest and best-known proponents of the Ahimsa (Non-Violence) principle. He would arguably be a proponent of “zero waste” as well, if he were reborn into today’s “dig, burn, dump” society.

Committing to a pledge for the Protection of All – “Jai Sanrakshan”, the Green Youth, with more than 500 environmental members, trains young people on the issues of ecological justice, connecting them to a variety of campaigns and empowering them to make a difference in their communities. Their present campaigns include:

A model of zero waste healthcare

Perhaps one of the most impressive zero waste initiatives is the Bir Hospital. Started in 1889, the Bir Hospital is one of Nepal’s oldest and busiest government hospitals. And like most

hospitals here, Bir has barely enough resources, beds and trained staff to service the needs of the masses of Nepali citizens seeking care, cure and surgery.

In 2010, Bir Hospital wards and hallways looked like many others across South Asia – overflowing trash bins full of used needles, bandages, dressing, food scraps, packaging and surgery waste feeding hordes of rats and cockroaches. A large section of the hospital’s backyard formed a trash heap, from where informal sector workers and children (without any protective clothing) would scavenge for used syringes and other plastic scrap to resell in the black market.

What has set apart this Kathmandu institution in recent years is the amazing zero waste program organized by the Healthcare Foundation, in collaboration with international allies like Healthcare Without Harm. By integrating zero waste with “mercury-free” and “safe-injection” programs, the HCF team have turned this old, underfunded and overcrowded hospital into a state-of-the-art model for dealing with hazardous and non hazardous medical waste.

The hospital has clearly marked waste separation systems and innovative, locally-made equipment have ensured that all discards are safely stored, sterilized, recycled and composted. Some highlights of this project included:

Today, more than 50% of the total waste stream is recycled, sustaining hundreds of green jobs. According to Mahesh Nakarmi, HF Director, this ambitious zero waste project was started with a “zero budget”. The lack of finances did not deter their innovation, diligence or drive.

And it doesn’t stop there: check back soon for part two of this series, where we meet the zero waste and environmental justice organizers of Darjeeling!

The article was originally posted in Zero Waste World Blog

Author: Ananda Lee Tan and Pratibha Sharma
Ananda Lee Tan is GAIA’s US and Canada Regional Coordinator. Ananda has been an activist, organizer and rebel-rouser for over two decades, working on anti-war, forestry, agriculture, climate, energy, trade and labor justice campaigns around the world. Ananda is based in GAIA’s Berkeley office. Pratibha Sharma is GAIA’s India Regional Coordinator. She also works closely with SWaCH, a collective of self-employed waste pickers that provides waste collection and management services.