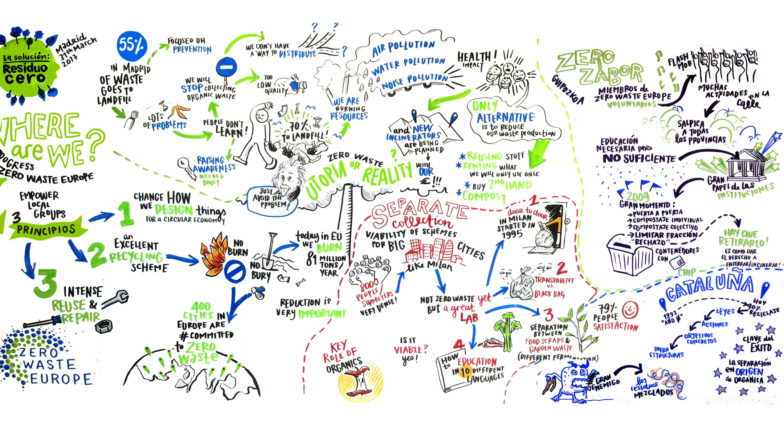 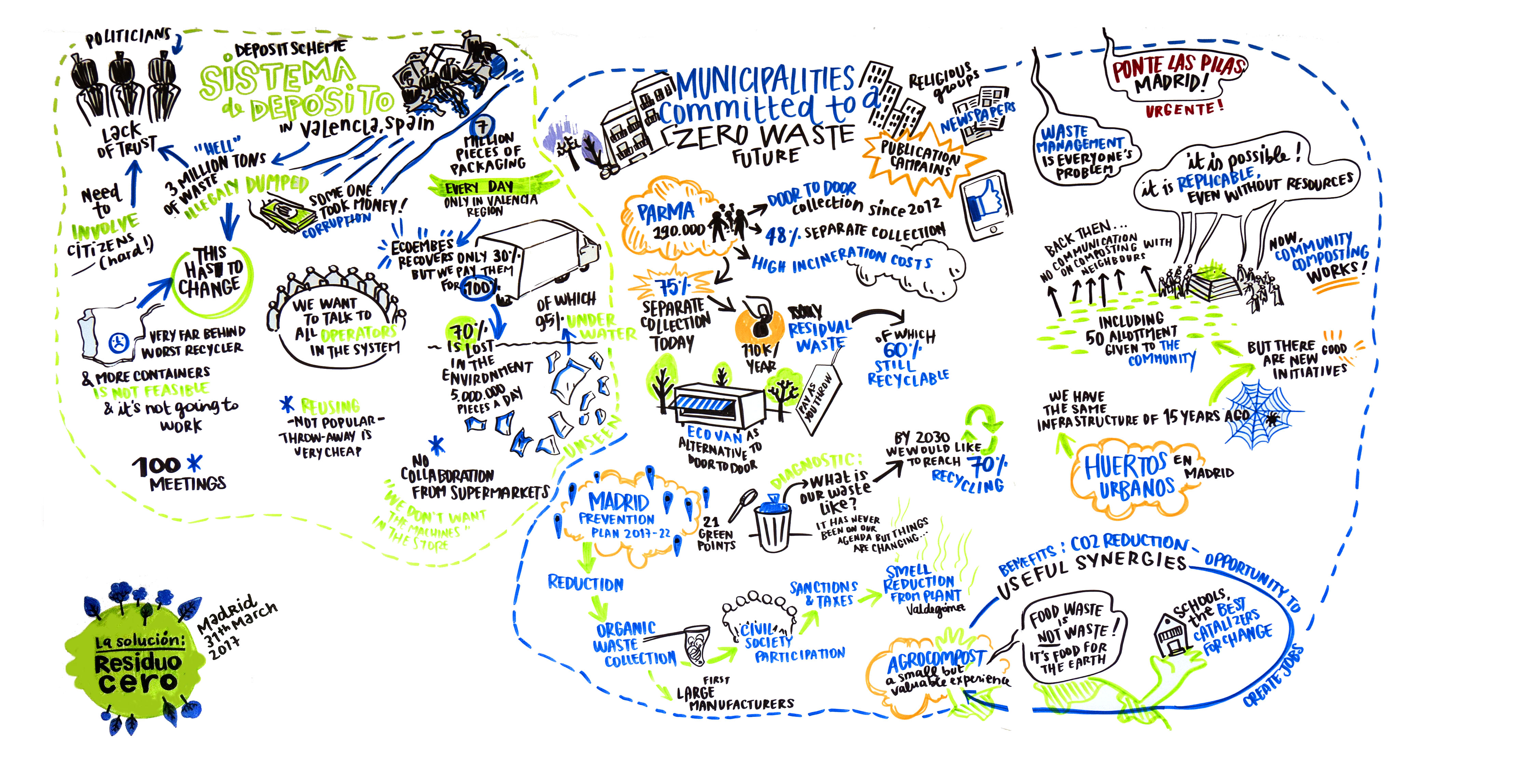 The event took place in Medialab Prado, a citizen laboratory of production, research and broadcasting of cultural projects that explore the forms of experimentation and collaborative learning that have emerged from digital networks. The space, provided a great backdrop to an engaging day of talks and discussions. Throughout the day Carlotta Cataldi provided live hand-drawn illustrations of depicting the conversations taking place, producing a lasting visual representation of the conference. Luke Blazejewski also took excellent photos documenting the success of the event.

The event was opened by José Antonio Díaz Lázaro, General Coordinator of the Environment Programme of Madrid City Council, who explained the importance of good waste management for a city such as Madrid. This led into the first session raising the question of ‘Zero Waste at the Local and Global Level: Utopia or Reality?’ which saw Joan Marc Simon, Zero Waste Europe Director highlight the successes and growth of the Zero Waste Municipalities Network whilst Diana Osuna from the Madrid Zero Waste Platform talked about the challenges and opportunities of organising for zero waste in and around the city.

The next session looked at the significance of the collection of organic waste to a zero waste strategy with presentations with speakers presenting progress in a variety of contexts. The case of the large city of Milan (1.3 million people) was presented by Zero Waste Europe Scientific Committee Chairman, Enzo Favoino, whilst not a ‘zero waste city’ has made major progress with separate collection of organics. Ainhoa Arrozpide Landa from Zero Zabor in the Basque country talked about the evolution of their campaign in Gipuzkoa. Other talks in the session examined the myriad of ways that organic waste can be managed at the local level, from the goats of El Boalo – Cerceda – Mataelpino municipality in Madrid to the steps being taken in Catalonia and Pontevedra. The session ended with Beatriz Martín from the Compost Network emphasising the importance of decentralised composting at a municipal level.

Session 3 was a glance into the world of repair and reuse with hearing stories from repair shop Millor que Nou in Barcelona, the social and environmental benefits repair and reuse processes and the imperative for reuse in Spanish Waste Legislation.

The fourth session of the day highlighted some of the emerging victories in Deposit Return Systems (DRS). From the exciting initiative happening in Valencia put forward by Julià Álvaro fro to the nascent schemes and progress being made in the UK and Scotland as explained by Samantha Harding of the Campaign to Protect Rural England (CPRE). The session also looked at the bigger picture for DRS schemes and manufacturers responsibilities.

The final session for the day looked at the challenges and opportunities facing zero waste municipalities and those aspiring to joining the zero waste path. The session was opened by Gabriele Folli from the Environmental Council of Parma, Italy, where a city of 200,000 has just reached a milestone separate collection rate of 80%. The session then looked at issues faced by Madrid as they attempt to overhaul their waste management system. This was followed by stories of grassroots projects in Agro-Composting in Madrid from Franco Llobera and the Vegetable network and local composting by Raúl Urquiaga.

As the day drew to a close, the floor was opened for questions with a number of interesting contributions from the public. Joan Marc Simon then concluded the conference

VIEW THE PRESENTATIONS AND VIDEO FROM THE CONFERENCE