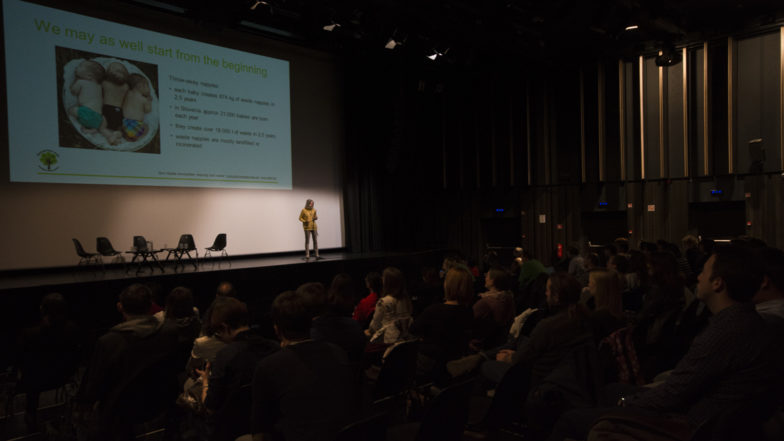 The conference was opened by an introduction to the history of Ljubljana and the implementation of zero waste policies in the city, from Erika Oblak of Ekologi Brez Meja. From the early struggle against the construction of an incinerator and the subsequent referendum, with overwhelming opposition in 1999 to just a few years later, having the neighbouring town of Vrhnika already leading the way with recycling rates as high as 50% as early as 2003.

When in 2012 another incineration plan was proposed, Ekologi Brez Meja with Zero Waste Europe’s support, successfully countered the plan with a zero waste alternative, which has led Ljubljana to being the waste management success story that it is today.

This was followed by Zero Waste Europe, Director, Joan Marc Simon expressing how amazing it was that such significant progress had been made by the city in only 2 ½ years.

The first discussion panel focused on reusable nappies, featuring Elizabeta Zust, from a nursery in Vhrnika that only uses cloth nappies and Hilary Vick, from Nappy Ever After, a nappy laundry service in London. The panel also included Joan Crous from the Eta Beta/Lavanda cooperative in Bologna, Italy, where 1,100 to 1,800 nappies are washed and delivered every day.

The panel covered the environmental and social benefits of reusable nappies as well as technical and commercial difficulties and issues surrounding the issue. This provided highly informative, inspirational and technical discussion by the participants.

Tourism was the focus of the next panel discussion. With Nina Kosin from the Ljubljana Tourism Board opened with a focus on the significance of the Green Capital award for the city, as well as the introduction of reusable crockery at the Christmas market with a deposit scheme in place.

Antonio Esposito spoke about Conka Park, the first zero waste hotel in Sorrento, Italy. With a wide range of initiatives promoting zero waste in the hotel, they have found significant success, and positive reactions from the hotel guests.

The participants emphasised the importance of differentiating between ‘food waste’ and ‘food surplus’ with the larger portion remaining fit for human consumption, the highest level of the ‘food waste hierarchy’.

The second day was opened by Zero Waste Europe’s President, from Capannori, Italy – Rossano Ercolini. Before hearing speeches from Zoran Janković, the Mayor of Ljubljana, and Irena Majcen, the Slovenian Minister for the Environment and Spatial Planning, offering their insights on Ljubljana’s success as a environmental leader across Europe.

The keynote speaks for the day was from Paul Connett, internationally renowned campaigner on zero waste, with over 30 years of experience in working on incineration and waste issues. Dr. Connett used his time to speak on zero waste as stepping stone to sustainability. His speech presented an inspiring vision of citizen action for the creation of a world without waste, a sustainable future and a better planet.

This was followed by a discussion of policies on a local level, with Tihana Jelacic, from Prekom, the Croatian waste management company for Prelog and the surrounding municipalities, who have recently adopted a Zero Waste Strategy, and are working to implement zero waste policies and practices. Stojan Jakin, from Vrhnika, the first Zero Waste Town in Slovenia spoke about how ranking towns by the recycling rates can be misleading when towns like Vrhnika are reducing the amount of residual waste year-on-year despite a less dramatic increase in recycling rates.

Matteo Francesconi, the Deputy Mayor of Capanorri spoke about how Capannori was first launched on the road to zero waste by the anti-incineration fight led by Rossano Ercolini, and now has a holistic approach to waste, with a system that adapts to the local reality and, therefore, integrates local people at every level.

This was followed by Mariel Vilella, Associate Director of Zero Waste Europe explaining the immense impact which waste management has on climate change, and how current accounting methods downplay this impact. Emphasising that it is time that we harvested this ‘low-hanging-fruit’ when it comes to reducing our greenhouse gas emissions.

The full presentation by Mariel is available online, with visual slides making a strong case for ‘Zero Waste’ as ‘Climate Action!’. The route to moving towards this low-carbon economy through zero waste is detailed in Zero Waste Europe’s recent report, ‘The Potential Contribution of Waste Management to a Low Carbon Economy’. Mariel, made the strong and compelling case that cities are at the forefront of this effort to move away from carbon intensive waste management practices, with cities being uniquely positioned to implement effective and efficient policies.

David Franquesa, then took to the stage to present eReuse, an open source reuse platform for electronic waste, which can be used to dramatically extend the use life of electronic products, as well as ensuring the traceability of the items from reuse through to recycling.

The final speaker at the conference was from the ECO-PULPLAST project which works with the paper industry in Northern Italy to recycle pulper waste from the recycling of paper to make ‘eco-sustainable plastic pallets’. This project has significant support from key players in the paper recycling industry where it forms a major alternative to waste incineration and offers a way to reduce costs.

The conference incorporated a wide range of expertise and experience. With inspiring and informative talks from politicians, industry representatives, social entrepreneurs, activists, and innovator. The focus on local action towards zero waste presented a number of concrete actions which can be taken by different municipalities in following the path to zero waste.