“Getting Climate Finance Right” in the Waste Sector 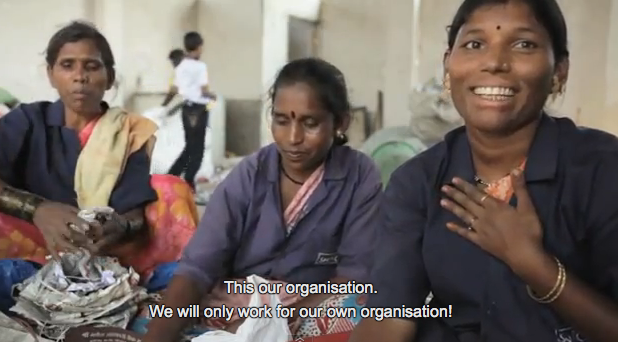 At a historic juncture for climate finance, Friends of the Earth US and the Institute of Policy Studies (IPS) have co-edited a report showing that it is possible to get climate finance right.

In the report, which includes work from many global, regional and local organisations including the Global Alliance for Incinerator Alternatives (GAIA), zero waste solutions are advocated as solid examples of successful climate programs, which should be the focus of further funding. This includes both the Solid Waste Collection and Handling (SWaCH) cooperative from Pune who provide door-to-door waste collection for more than 400,000 households and the Zero Waste Program at Bir Hospital in Nepal, which has reduced dioxin emissions from medical waste incineration by over 90%.

Combining the stories of dozens of local and regional groups, this study demonstrates the importance of learning from successful examples of climate finance in looking ahead into the future. With the creation of the Green Climate Fund (GCF), which was created to help transform developing country economies by supporting high quality investments in clean energy and climate resilience, it is essential that future projects are able to learn from a critical assessment of previous climate finance projects.

This report comes as the GCF accredited 13 new organisations to administer and distribute funds. Controversially this list included the Deutsch Bank who are the worlds 10th largest backer of coal, having invested €15bn in the industry since 2005, according to the BankTrack network. This decision sparked outrage from over 20 of the worlds leading climate organisations including GAIA, Friends of the Earth US, Action Aid International, and many others. In the statement the groups said they were “tremendously discouraged and disappointed” adding that the fund was at “real risk of losing credibility”.

Previously concerns have been raised around the lack of criteria for the GCF investments. Earlier this year, civil society organisations demanded the GCF approve an exclusion list to ensure that none of this climate investments will end up financing dirty energy sources. In this regard, GAIA and Zero Waste Europe have been actively campaigning against the financing of incinerators by the GCF, Mariel Vilella, Associate Director of Zero Waste Europe said “Given the urgency of the climate crisis, the shrinking pool of public money, the health risks of incineration, and the availability of sound alternatives, waste-to-energy would be a bad investment for the Green Climate Fund”.

The new study consists of 22 examples of successful climate related projects, programs and policies, across three continents; Africa, Asia, and Latin America. The examples were identified by organisations from the Global South and North and follow a comprehensive list of overarching characteristics: all of them are deeply rooted in the local communities, are inclusive and encourage the participation of affected communities; recognize and respect people’s rights, with special attention on gender and relationships/partnerships building; and most importantly, all of them are fully grant-funded, which allowed for flexibility, experimentation and innovation. (See the full list)

One of the case studies featured in report, under the category of ‘mitigation’ is that of the Solid Waste Collection and Handling (SWaCH) cooperative. Based in Pune, India the cooperative is ‘an autonomous social enterprise that provides front-end waste management services’, over 80% of SWaCH members are women from marginalised castes, and as a result of the cooperative worker-members can earn up to three times their previous daily income.

It is further estimated that the SWaCH program saves the city an estimated $2.8 million per year in waste collection and disposal costs, and is responsible for preventing 640,000 tons of greenhouse gasses annually. The story and success of the SWaCH workers has been well documented, and more details can be found in the GAIA report on Successes and Lessons from Around the World

The case of the Zero Waste Program at Bir Hospital in Nepal, with no external funding the hospital managed to successfully reduce dioxin emissions associated with medical waste incineration by 90%, whilst increasing the percentage of the total waste stream which is recycled to over 50% , a move which is responsible for supporting hundreds of recycling jobs.

Such incredible achievements were possible through sustained efforts and initiatives from vermicomposting to the redesign of thermometers and other medical technology to use non-mercury alternatives, with the support of the Health Care Foundation and international allies such as Health Care Without Harm. This project carried out with zero budget, demonstrates the huge potential for a GCF funded program which would have the capacity to improve waste management across hundreds of hospitals in the region.

The success of the waste workers of Pune, and Nepal, on comparatively tiny budgets make it clear that the GCF should be doing more to expand and develop such programs and that truly effective climate finance projects include a wide range of factors, which are deeply rooted in affected communities. Only with these lessons of past successes can we hope to make progress towards a strong and effective climate finance model which is equitable for everyone involved.