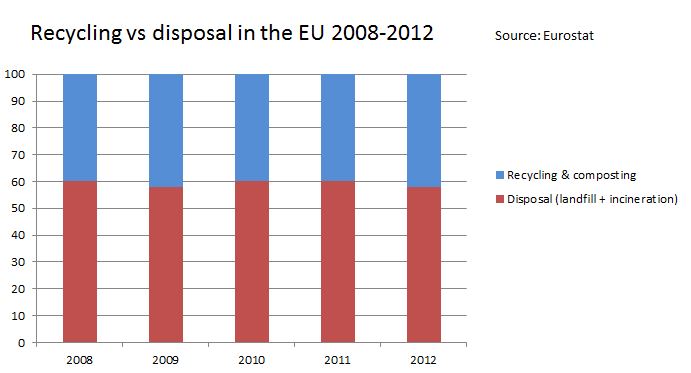 80% of Europeans want their country to waste less and an ample majority wants Europe to recycle more whereas business leaders warn about rising resource prices and need for increasing resource efficiency. So far the European Union was responding to this need with the Circular Economy package which was promising to create jobs and economic growth, boost recycling, promote new business models and reduce emissions.

Yet, according to leaked documents the new European Commission led by J.C.Juncker which took office in November wants to withdraw proposals on a number of issues including the waste package. And all in the name of growth and jobs, shaking off unnecessary legislation and easing the approval of the files.

How solid are these arguments?

According to the “old” European Commission:

But the new EC wants to withdraw this and stay with what we have; a system that wastes resources and job opportunities.

Recycling is stagnating in Europe; we need the waste package!

The current Waste Framework Directive approved in 2010 was supposed to turn the EU into a “recycling society” yet for a number of reasons the recycling rates have stagnated and in 2012 the situation was the same as in 2009 –see graph-.

If the EU is serious about recourse efficiency it needs to improve current waste legislation and this is what the waste package was planning to do. Don’t bin it!

In contrast with the disappointing results at European level municipalities adopting Zero Waste goals are proving that it is true that a Zero Waste package increases jobs, recycling and economic activity, reduces waste and saves money. Examples here and here.

Juncker’s Commission argues that it will withdraw legislation that has not “realistic chance of being adopted”. The truth is that the initiative of the European Commission to withdraw the waste package has been opposed by 11 member states, most of the business community -except for reactionary group Business Europe-, cities and regions organisations and all NGO and civil society community.

The EC argues that the withdrawal is reasonable when “no agreement between EP and Council is foreseen”, yet this is a normal situation in the beginning of any negotiation process! If the new EC is to launch proposals for legislation only when agreement between EP and Council are guaranteed, prior to any political negotiation, it sets the bar of ambition to move the EU forward unacceptably low.

Why wait to propose the alternative?

The EC spokesperson claims that “the EC believes in the objectives of the proposals” and that scrapped proposals “will be proposed again, but in a different and more effective way“. If this is true it is procedurally wrong to withdraw legislation without presenting the alternative plan to get to the same goal or, at very least, commit to present the alternative proposal by a certain date. It is irresponsible to park action in this field when the EU is running against the clock in the field of resource efficiency and job creation.

All in all, if the decision of the new EC to withdraw the waste package is confirmed one can state that:

– it is politically contradictory because it harms the potential of job creation and economic activity that the same EC claims to want to pursue,

– it is not based on facts. Objectively the EU needs measures to increase recycling and resource efficiency,

– it is procedurally questionable that an important piece of work is withdrawn without presenting an alternative. As long as the alternative is not presented the EC cannot claim that it supports the objectives of the Circular Economy.