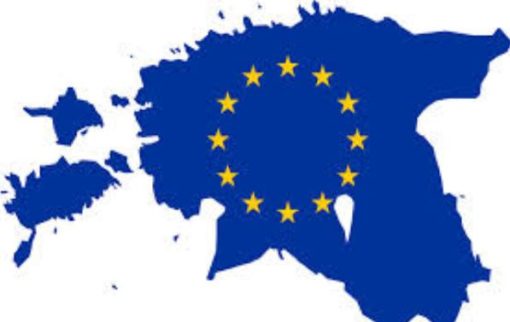 And the best waste performing country in Europe is… Estonia!

According to Eurostat statistics published last week the best performing countries in Europe when it comes to waste avoidance and recycling are Estonia, Slovenia and Belgium.

Indeed, there are countries such as Germany who do very well in recycling (65%) but generate lots of waste (611kg). Then there are those who don’t generate much waste (324kg) but don’t recycle much such as Slovakia (13% recycling).

If one looks at how much waste is sent to landfill or incineration after recycling, it is possible to get an idea of the waste management performance of that country. (See the red column in the table at the bottom)

Estonia, Slovenia and Belgium combine a low level of municipal waste generation with an acceptable level of recycling and composting, which make them the countries that send less kg. per person to landfills and incinerators.

Estonia, the best EU performer, generates 279kg per person, and recycles 40% of it leaving 167kg to be disposed of.

For sake of reference, Zero Waste municipalities are a living proof that it is possible to reduce the best European benchmark more than three times the Estonian size. For instance, in Contarina district, the annual residual waste is of 57kg (that is 0,15kg per day!).

These statistics are published annually and reflect how many kg. of municipal solid waste Europeans produce and how it is treated. In average every European generated 492kg per person, recycled 42% and landfilled or incinerated 58%. A slight progress from 2011, when waste generation was 503kg (11kg more than 2012) and a 2% shift from disposal into recycling. 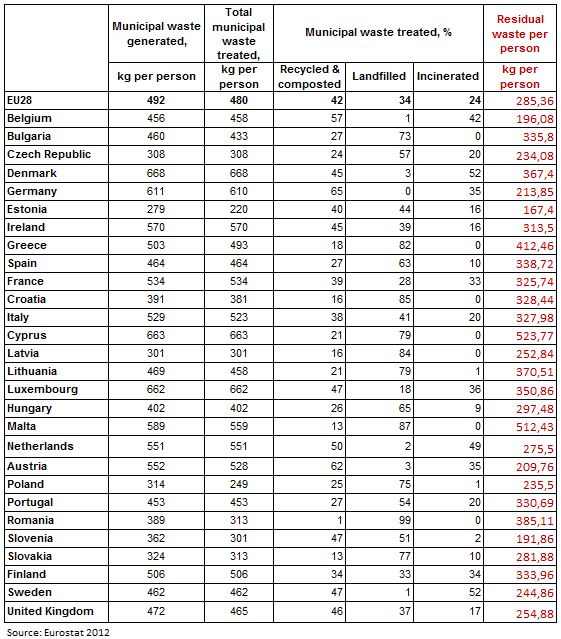 All statistics need to be taken with a pinch of salt and particularly those that benchmark waste treatment in the EU.

Firstly because the information is provided by the environment ministries from the EU capitals without much capacity from the European Commission to double-check its consistency.

Secondly because there is not yet a single homogeneous method to calculate what is recycled, composted or landfilled or what waste is included as municipal solid waste. For instance, waste exports and backfilling are considered recycling in some countries but not in all of EU. Or some countries such as France allow the output from MBT plants to be called compost when this is forbidden in others.

Finally, caution is required because the differentiation between the treatment categories is not useful to understand where the waste actually ends up. For example, incineration is a pre-treatment operation because after the combustion it will still have a residue of 20 to 30% of toxic ashes that need to be landfilled, yet they don’t appear in the landfill column.

This explains that countries such as Germany show zero landfill rates when in reality it they are landfilling more than the French (30 million tones for the former vs 24 for the latter). What the “0” landfill means is that no waste is landfilled without pre-treatment…

All in all, although one must acknowledge that the Eurostat manages to present the most homogeneous supranational data on waste treatment in the world, the degree of heterogeneity should be taken into account for the comparisons.

In the meantime what data so far does show is that the borders between Western and Eastern Europe have fallen when it comes to waste management. As a whole, old EU member states such as Spain or France perform significantly worst in recycling than new member states such as Estonia or Slovenia.

At the same time whereas traditional “advanced” member states such as Sweden, Denmark or Germany are stuck in the incineration trap, we might be seeing new waste champions arising in those places where there is flexibility to continue reducing waste generation and increasing recycling.Estonia, the best EU performer, generates 279kg per person, and recycles 40% of it leaving 167kg to be disposed of.