The story of Capannori – A Zero Waste champion 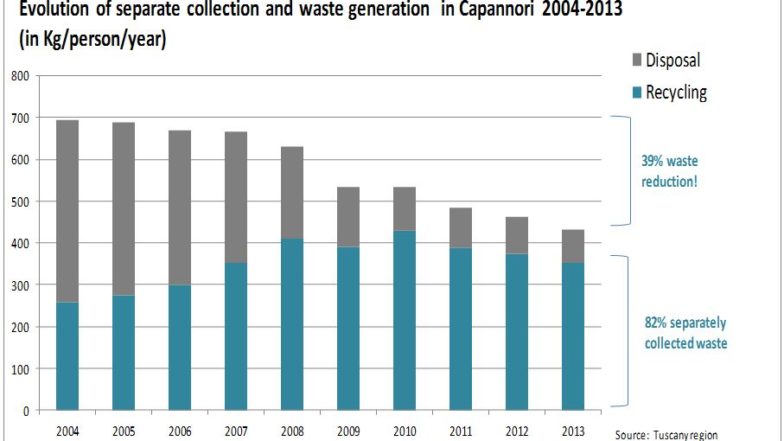 Capannori, a town of 46,700 inhabitants near Lucca in Tuscany, was set to be just another step in the relentless march of waste incineration in Italy. 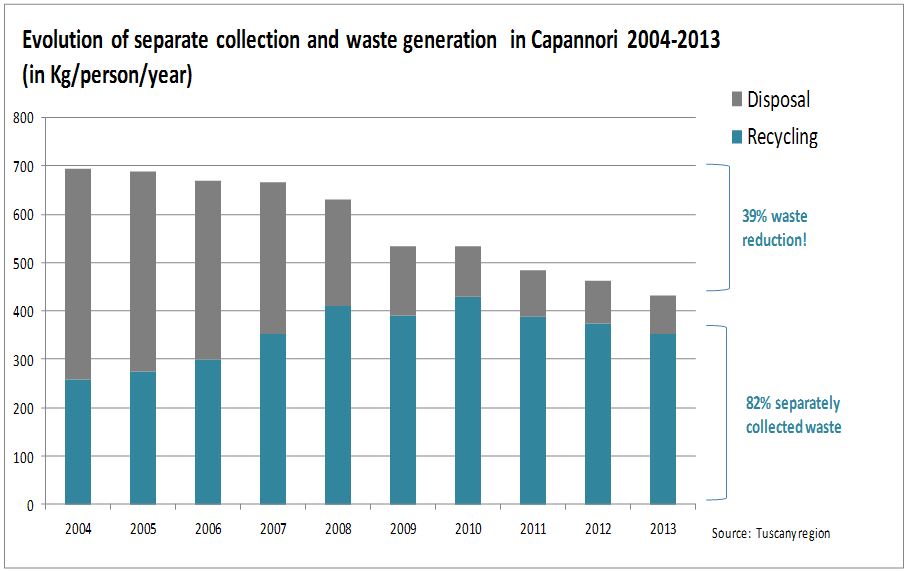 Nowhere is the phrase “Mighty oaks from little acorns grow” truer than in the small town of Capannori, Italy, where a small but determined movement to stop the construction of an incinerator led to an Italy-wide grassroots Zero Waste movement. The area has one of the highest municipal recycling rates in Europe and is an example of strong policy decisions and community participation achieving groundbreaking results.

Battle of the Burners

Capannori, a town of 46,700 inhabitants near Lucca in Tuscany, was set to be just another step in the relentless march of waste incineration in Italy. The northern European model of burning waste to avoid the environmental and social problems associated with landfill and to produce energy was gaining traction in Italy, a country beset with a dramatic and urgent waste management problem. Local medical organisations and even environmental NGOs put up little resistance, seeing incineration as the least-bad solution to a seemingly impossible dilemma. Business interests and pressure from northern Europe contributed to a rush to incineration that seemed unstoppable.

Those who should have mounted the most strenuous defence against the encroachment of incinerators were lacking. The public debate did not discuss the fact that incineration encourages waste generation, competes with recycling, aggravates the sustainability challenge, sparks corruption and releases toxic emissions while capturing just a tiny bit of the energy stored in waste.

Communities such as Capannori were left to fight the construction of incinerators on their own. In 1997 primary schoolteacher Rossano Ercolini recognised the potentially damaging effects the planned local incinerator would have on the health of residents and on the surrounding landscape. With the help of Dr Paul Connett, a world expert on incineration and Zero Waste, he set about convincing local residents of the potential danger of erecting an incinerator in their community. The movement was successful in blocking construction and soon spread to three other communities threatened with incineration in the region.

Tasked with implementing an alternative to incineration, Ercolini decided that the only approach was that of waste reduction. He took over the running of the local waste collection corporation, ASCIT, to create a door-to-door waste collection pilot scheme. After a year he stepped down from his role and went back to campaigning against incineration around Italy. Ercolini managed to persuade the town council of Capannori to be the first in Europe to sign up to the Zero Waste Strategy in 2007, committing to sending zero waste to landfill by 2020.

Door-to-door collection was introduced in stages across the municipality between 2005 and 2010, starting with small villages, where any mistakes could be identified and corrected early on, then extended to cover the entire municipal area in 2010. By that time, 82% of municipal waste was separated at source, leaving just 18% of residual waste to go to landfill. In 2012 a number of villages in the municipality became subject to a new ‘Pay As You Throw’ waste tariff, where the frequency of collection per household is measured using microchips in stickers on residual waste bags, scanned by a reader on the collection vehicle. In those areas the new tariff incentivized better separation and prevention, driving local source separation rates up to 90%.

Local politicians recognize that the key to their success with the door-to-door collection scheme and other zero waste measures was the early and active consultation of residents. Meetings were held in public places to gather input and ideas and involve the local population in the Zero Waste Strategy.  Printed information was sent to every address. A few weeks before door-to-door collection was introduced in a given area, volunteers distributed free waste separation kits to all homes, including the various bins and bags required and further printed information. Volunteers were trained to answer residents’ questions about the new scheme, all of which meant that participation was smooth, immediate and effective.

A study carried out by La Sapienza University in Rome, comparing door-to-door collection in three communities in Italy (Capannori, Rome, Salerno) found that in Capannori participation (99% of inhabitants sort waste) and satisfaction (94%) were higher than in the other two communities. This correlates to the high percentage of Capannori residents who received literature about the changes (98.6%), attended meetings about changes in collection (46%) and know where to go to ask for information about waste collection (91%).

The savings from no longer sending most waste to expensive landfill sites, and earnings from the sale of materials to recycling plants mean the scheme is economically self-sufficient, even saving the council over €2m in 2009. These savings are ploughed back into investments in waste reduction infrastructure, and reducing fixed waste tariffs for residents by 20%. It has also funded the recruitment of 50 ASCIT employees, boosting employment in the region.

One of the most successful elements of the new collection system has been the diversion of the organic waste stream. Not only does ASCIT carry out frequent door-to-door collection of organic waste, which is sent to a composting plant in the province, in 2010 public canteens in Capannori were supplied with Joraform composting machines. In the future these local collective composting machines could be extended to cover groups of residents, which can help to reduce the cost of collecting, transporting and treating organic waste by between 30 and 70%.

Residents have been encouraged to take up home composting, with 2,200 households picking up free composters and receiving training on composting techniques. Those households that home compost are given a 10% discount on their waste tariff as an incentive, and spot checks have shown that 96% of households are still using their composters correctly. A biogas plant for the area is in the planning and consultation stage.

Designing waste out of the system

In 2010 Capannori set up the first Zero Waste Research Centre in Europe, where waste experts identify what is still being thrown in the grey residual waste bags and come up  with  solutions  to  get that 18% figure down even further. Finding that items such as coffee capsules were among the most commonly discarded items, the Research Centre held meetings with coffee manufacturers such as Nespresso and Illy to work on biodegradable or recyclable alternatives.

The high volume of disposable nappies in residual waste led the municipality to offer subsidized washable nappies to local parents. Taking a collaborative rather than combative approach has meant that manufacturers have responded positively, with coffee manufacturers initiating research into alternatives to capsules.

One man’s trash is another’s treasure

Not only has work been done to improve recycling rates – emphasis has also been placed on reuse. The municipality opened its own Reuse Centre in the village of Lammari in 2011, where items such as clothes, footwear, toys, electrical appliances and furniture that are no longer needed but still in good condition can be repaired where necessary and sold to those in need, thereby diverting them from landfill and serving a vital social function. The centre is steadily expanding its activity- in 2012, 93 tonnes of objects were dropped at the centre and in 2013 those figures look set to rise.

According to Rossano Ercolini, “The record figures from the Lammari ‘Ecology Island’ (drop-off point for bulky waste and reusable items, ed.) show that our culture is changing, partly due to the municipality’s policies. Whereas before people threw everything away, now they realize that recovering things not only benefits the environment, but also those who can buy them at affordable prices”.

The centre also provides training in upcycling skills such as sewing, upholstery and woodwork, so as to spread the values and practice of reuse as far as possible.

Where Capannori is truly leading the field is in the area of waste prevention – between 2004 and 2012 the overall volume of waste generated per person dropped by 39% (from 1,92kg to 1,18 kg/person/year) and it is foreseen that it will continue to go down thanks to the extension of pay-as-you-throw scheme to all the municipality. More impressively, the rate of unseparated –or residual- waste per capita was reduced from 340 kg per year in 2006 to 146 kg in 2011, a drop of 57%. Compare this to the figures for Denmark, 409 kg unseparated waste per capita per year (2011), and you can appreciate the scale of the achievement.

This means that beyond just boosting recycling rates, local policymakers have looked at ways to reduce waste generation at source. As part of their Zero Waste Strategy, they have identified 11 areas for action. Perhaps the most visible of these is the sale of products loose or on tap – the municipal council provided tax incentives to local small businesses to stock products that could be refilled with customers’ own containers, such as liquid detergents. A grocery shop, Effecorta sprang up in Capannori in 2009 selling over 250 locally sourced food and drink products in bulk. Local residents can buy pasta, wine, oil and many other necessities without having to throw away any packaging.

The Short Chain – a boon for local agriculture

Two self-service refill stations for milk were opened, introducing a model of food distribution called ‘the short chain’ –the stations are supplied directly by a local farmers’ cooperative and consumers buy without the intermediary of a packaging plant or retailer, so that they pay lower prices and farmers make more on each litre.

It has been enormously successful, with 200L a day sold through the stations and 91% of customers refilling their own containers, thereby cutting about 90,000 bottles out of the waste system.

Other initiatives have included a campaign to increase consumption of tap water rather than bottled (Italians are Europe’s biggest consumers of bottled mineral water), doing away with disposable cutlery and flatware in public buildings including schools, distributing cloth shopping bags to all 17,800 households and 5,000 to businesses and stocking reusable nappies and sanitary products in municipal pharmacies. All of these initiatives are a result of proactive political nudges in the right direction, leading to residents becoming aware of and able to implement virtuous consumption habits. 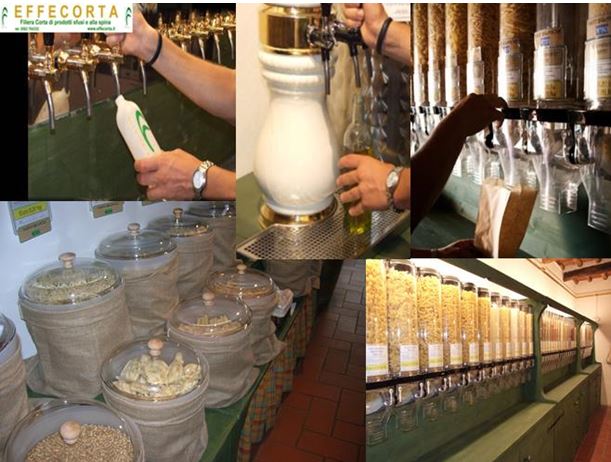 Taking a proactive, holistic approach and involving residents in all stages of policy development are the key elements that have led Capannori to top the European waste prevention leagues and, through its position as the Zero Waste Network’s Flagship Municipality, inspire other communities to aim higher than just fulfilling recycling targets. Its committed, visionary leaders have seen opportunities rather than problems, and through transparent engagement with the population have made this the achievement of an entire community.

Today 100s of European municipalities follow the example of Capannori and Rossano Ercolini has been recognised for his efforts with the prestigious Goldman Prize Award 2013.

http://www.comune.capannori.lu.it/sites/default/files/segreteria_sindaco/opuscolotia_rifiutizero_2012-2013.pdfLocal politicians recognize that the key to their success with the door-to-door collection scheme and other zero waste measures was the early and active consultation of residents.