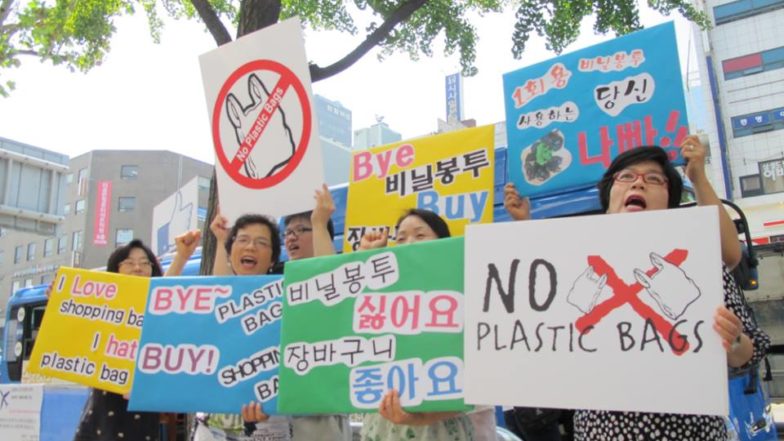 Plastic bags have been in the spotlight a lot this year. From bans in Los Angeles and Manila to tax levies in Scotland, it seems that the tide is turning on disposable, single-use plastic bags. On the 4th International Plastic Bag Free Day, observed in different locations between the 3rd and the 10th of July 2013, individuals and groups from around the world held events and made statements in support of a move away from disposable plastic.

The purpose of the day, which was organised jointly by GAIA, Zero Waste Europe, and Fundació Prevenció Residus i Consum, was to emphasise the alternatives to single-use plastic bags and the dangers they present to marine and land ecosystems. The campaign received expressions of support from many prominent figures from around the world, including Achim Steiner, Executive Director of the UN Environment Program; Nohra Padilla (winner of the Goldman Prize for Latin America 2013); Annie Leonard, author of The Story of Stuff; and Jeremy Irons, actor and star of the 2012 film ‘Trashed’.

Some groups, such as the Korea Zero Waste Movement Network in Seoul or the EcoWaste Coalition in Manila, Philippines, gathered supporters and took to the streets with placards to share their message with passers-by. Friends of the Earth groups in several Spanish cities campaigned with local businesses and shoppers , exchanging reusable cloth bags for single-use plastic bags. The Madrid chapter of Friends of the Earth created a model of the Pacific Garbage Patch to show in a city market, reminding shoppers where their disposable plastic waste can end up.

Protesters gathered in the Philippines to call for an extension of the ban in place in the capital, Manila.

Staff at Health Care Without Harm in the Philippines and at Friends of the Earth Europe in Brussels photographed themselves holding slogans and uploaded the results to the Plastic Bag Free Day website or the campaign’s Facebook page. Many used the campaign’s website and related social media sites to pledge personal action and reiterate their commitment to ending consumption of single-use plastic bags.

Environmental groups, such as DUH in Germany and the Argentinian Citizen’s Coalition Against Incineration, drafted statements calling on their governments to take action to reduce plastic bag production and disposal. ‘Initiatives Océanes’, launched by the Surfrider Foundation Europe, used the day to announce a petition to the European Commission calling for an EU-wide ban on single-use plastic bags. So far, the petition has gathered over 10,000 signatures.

The campaign used social media to connect individuals and organisations from around the world, reaching more than 20,000 individuals via Facebook and Twitter. The resulting network of supporters will be able to communicate with one another and continue to work on plastic pollution and waste issues throughout the year.

Over the last four years the event has grown in size and in quality, as the effects of single-use plastic on the environment have become increasingly visible to everyone.

With this year’s slogan, ‘Zero Bags – Zero Waste’, people from around the world shout that there is no place for single-use plastic bags on our finite planet!