The tourists going to the island of Mallorca in Spain are invited to bring their trash along with them to burn it in the new incinerator which is successfully fighting recycling, composting and reuse. 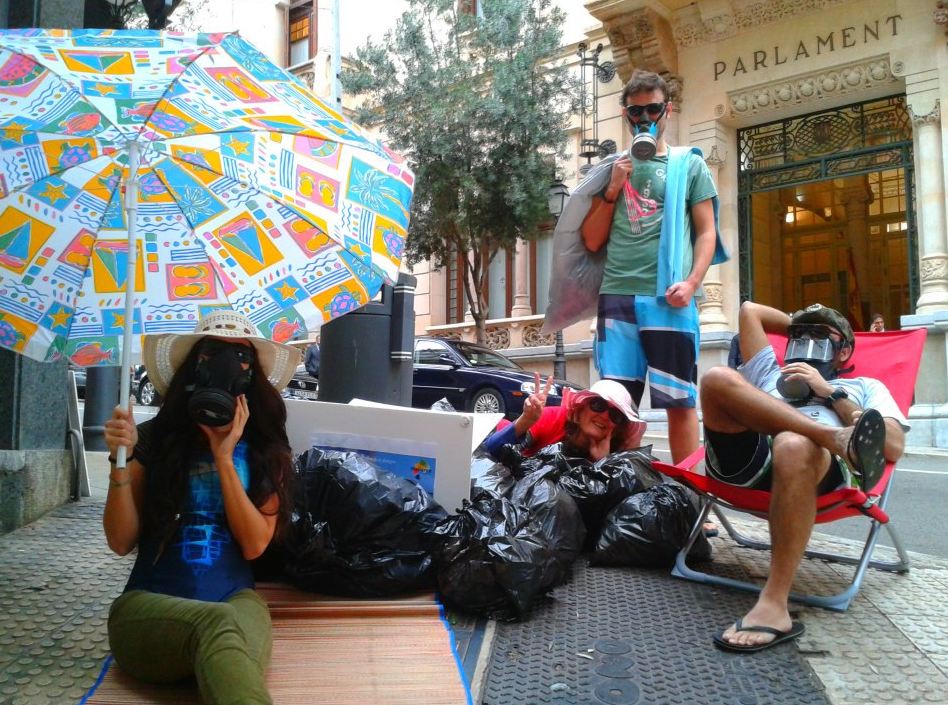 This is the –ironic- message that the local group GOB wanted to transmit in their latest action in front of the regional parliament upon the approval of the decree to import waste to feed the burner. Sadly, the European Commission is also supporting importing waste from many km away to the island despite being a contradiction of the proximity principle and the waste hierarchy.

In the beautiful island of Mallorca one can find the best and the worst of waste management in southern Europe. On one hand some zero waste municipalities (15% of Mallorca`s population) have implemented ambitious door-to-door source separation schemes which would allow them to recycle more than 75% of the waste. On the other hand the regional government through the company TIRME created to privatise waste management had built an incinerator with the capacity to burn 300,000tn of waste which represented 75% of all the municipal solid waste generated in the island.

After an obscure and dodgy process in 2007 this already overdimensioned burner was enlarged with an extra capacity to burn 432,000tn more. In total, Mallorca generates 542,094 tn and has an incineration capacity of 736,000tn in 2011. The biggest incinerator in southern Europe burns 84% of all municipal waste generated in the island; hence most recyclables and compostables are today incinerated.

There are at least three reasons why this is a bad practice of waste and resource management:

–          It contradicts the waste hierarchy: Instead of recycling targets Mallorca has incineration targets of 62% of MSW. Before recycling or reuse the first option for waste in Mallorca is incineration. Every ton of waste that is recycled instead of burned increases the fee for the citizen because the contract with the incinerator obliges to feed it during the next 30 years, if a municipality prefers to recycle or reduce waste they will have to pay for the tones that the incinerator will not receive.

–          It goes against the European Resource Efficiency Roadmap: because of the contract with the incinerator the incentives are all for burning and not for recycling. According to the Resource Efficiency Strategy by 2020 incineration should be only for what is not recyclable and compostable. In Mallorca according to the contract most recyclables and compostables are and will be burned during next 30 years.

–          It goes against the people: the citizens are already paying the highest prices in waste management in Spain to burn waste in an inefficient incinerator that doesn’t even recover the heat. At the same time modern recycling and composting plants partly financed with EU money have to be paid when not being used because waste is being sent to the incinerator.

The case of Mallorca illustrates with all cruelty how incineration –or any kind of disposal- competes with recycling and the upper levels of the hierarchy. Hence, it is unlikely that the targets set by the EU will be accomplished unless the economic and legislative drivers are changed to prioritise recycling.

There are good examples of islands in the Mediterranean which have recycling rates above northern European standards (regions in Sardinia are above 60%). Mallorca itself has municipalities such as Esporles or Puigpunyent doing an excellent job (above 70% recycling) despite the adverse legislation and local conditions. With the right legislation and political will Zero Waste is possible in Mallorca, with current conditions sustainability is a mission impossible.

The Zero Waste movement asks the European Commission to intervene to cap the incineration overcapacity in cases like the one of Mallorca when recycling is directly hijacked. The current EU legislation gives all incentives to do the wrong thing and Mallorca is a clear example of it.The case of Mallorca illustrates with all cruelty how incineration –or any kind of disposal- competes with recycling and the upper levels of the hierarchy.