Nappy Ever After, a laundry service for nappies07 November 2012Next

Is the EU missing the boat in ship recycling?

The EU could be generating jobs and local economy whilst preventing pollution and destruction in the global south if it got its policies right in shipbreaking. 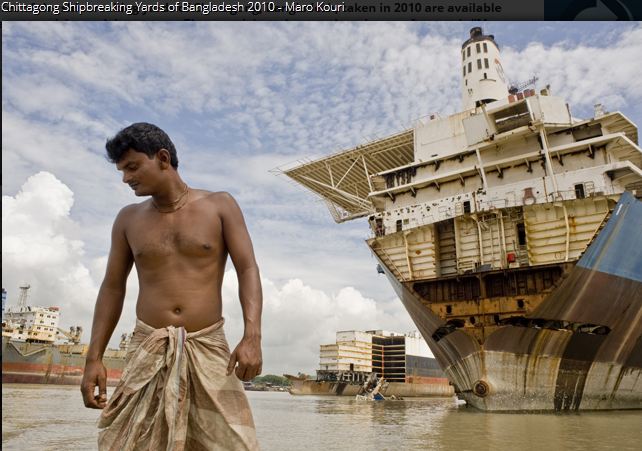 Every year, about 1,000 ships are sent for breaking so that their steel and some of their contents can be recycled. Most of the ships contain hazardous materials such as asbestos, mineral oil, PCBs, mercury, etc. However, despite high unemployment rates and empty shipyards in Europe more than 200 European ships were sent for breaking on the beaches of South Asia in 2011, and the number of ships to be broken in 2012 is expected to beat all records.

This is because instead of selling their ships to recycling facilities that enforce strict downstream waste management, such as in the EU, Turkey, Canada, the US and Mexico, most shipowners prioritize maximum profits and sell them to the shipbreaking yards of India, Pakistan and Bangladesh.

The European Commission claims that there are not enough recycling facilities in the OECD -let alone the EU- to recycle these vessels and hence it permits that recycling takes place in unacceptable conditions in the global south. According to the NGO Shipbreaking Platform the claims from the European Commission are based on a flawed impact assessment, and it proves that in the OECD there is enough recycling capacity. The problem is clearly that the prices for proper recycling are a lot higher than those in the global south where recycling takes place in facilities considered unsound to health and the environment. The Basel Convention and EU Waste Shipment Regulation ban such export of hazardous waste to poorer, non-OECD countries, but this is easily circumvented, notably by reflagging ships.

The result of the commission’s assessment, published in March, was that the lack of recycling capacity meant the waste shipment regulation should no longer apply to ships (COM (2012) 118).

But NGO Basel Action Network (BAN) published a report proving that the commission “failed wholeheartedly” to consider both active and dormant recycling capacity in North America. Alongside EU and Turkish sites, this could easily handle the 1.64 million tonnes of old ships from the EU each year.

The final decision is in the hands of the EU member states in the council of ENVI ministers and some member states such as Germany, Finland, Denmark, Estonia,  Italy, Holland,The Netherlands, Ireland and Sweden are supporting the existing ban of export of end-of-life ships to the global south. It is sad to see how countries such as Spain with record unemployment levels and empty shipyards don’t see the opportunity to convert the old shipyards into ship recycling facilities. It would help Spain, it would help Europe and it would help the people in the south suffering from the European ecological dumping.

The Zero Waste movement stands committed to proximity principle and extended producer responsibility together with the principles of local economy and environmental justice. For these reasons it advocates for the construction of ship recycling clusters in Europe that boost depressed European economic sectors whilst removing the ecological and social burden from the global south. The European Commission should maintain the ban on the export of end-of-life vessels.

Out of all ships sent for breaking every year, 40% are owned by European companies.