How to measure sustainability? 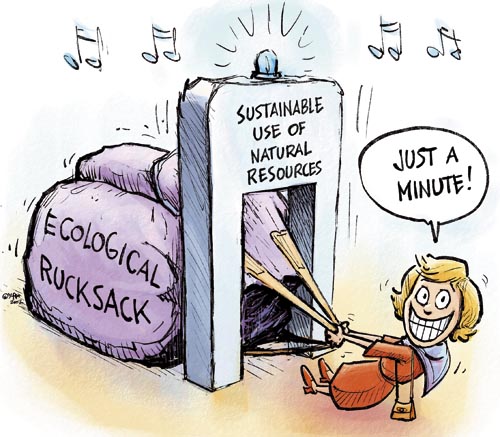 Is Zero Waste good for the economy? Sure it is! Does it show in current indicators? Mmm… not always. What’s wrong here?

One of the main reasons that can explain the current European economic crisis are something as simple –yet complicated- as indicators. The quest for GDP growth has driven the EU countries through very unsustainable paths. Indeed current indicators give an extra bonus to a throw-away society; for every piece of waste we generate, a new process of extraction, processing, transport, manufacture and disposal is triggered which the increases the economic activity making GDP grow. This explains the obsession for consumption of throw-away goods; the more garbage we produce the better for the economy! But this is true only when measured with traditional indicators. Common sense tell us that producing more waste can not be good for the economy, but according to current indicators it is.

For instance, if we stop buying bottled water in single-use packaging and change to tap water or if we start replacing single-use plastic bags for reusable bags we will be reducing economic activity as it is measured with traditional indicators. There is obviously something wrong with our indicators if sustainability features as a minus and not as a plus.

In the long run, unsustainable practices end up harming the economy so badly that even traditional indicators such as GDP show it but then it is often too late to act. Climate change is a good example of this; there is scientific consensus that global warming is taking place but too often measures to mitigate it they depress traditional indicators such as GDP growth -despite improving sustainability!-. Another example, home composting captures carbon, builds top soil, saves transport, collection & transport emissions and educates society but from the point of view of GDP incineration of organic waste features better despite vastly increasing CO2 emissions & wasting energy in the collection and burning.

There is no discussion on the need to replace or complement GDP as an indicator, the discussion is which indicators to chose: UNEP and the UNU-IHDP presented the Inclusive Wealth Index in June which measures wealth using countries’ natural, manufactured, human and social capital, and which is intended as a replacement to Gross Domestic Product (GDP) and the Human Development Index (HDI). Also the European Commission has been working on indicators in the Beyond GDP, measuring progress, true wealth, and the well-being of nations. Many environmental indicators can be found here. Friends of the Earth also proposes indicators to measure Resource Use.