Reusable nappies, a Zero Waste solution to an European problem

We all use or have used nappies in a time of our life. Nappies are a fairly recent invention that has eased the workload to many generations of parents –specially mothers-. Consequently, nappies are here to stay. 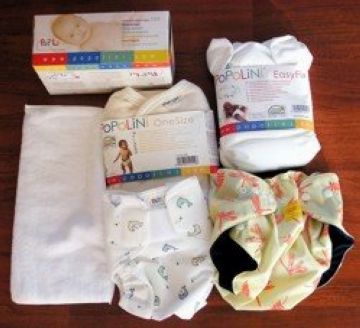 The question is how to make its production, transport, use, re-use and disposal sustainable? What kind of nappies are suitable for a society that aims to phase out waste?

Why are single-use disposable nappies a problem?

Ca 4000 to 5000 nappies are used per child until its 3rd year of age, which equals 1tn of waste per child. Seniors also use nappies and hence generate vast amounts of highly putrescible waste. In fact, even though nappies represent only between 1 and 2% of total municipal solid waste, in the places with highest separate collection rates they represent almost the biggest fraction left in the residual waste. For instance, in Capannori, the first Zero Waste municipality in Italy, nappies represent almost 15% of the waste fraction that can’t be recycled or composted. With the increase in diversion of other waste streams and increase in the age of the Europeans that will need nappies we shall see an increase both in percentage and weight in the next years in Europe.

The problem with nappies is its high fermentability combined with the composition of the nappy –combination of plastic, cotton, creams and faeces-. This means that, firstly, disposal of the nappy in the waste bin (as mixed waste) and, secondly, forces a very frequent collection of the garbage bag -because of smells and other hazards caused by its putrescibility-.

If we could solve the problem of nappies in the waste bin it would be possible to reduce the frequency of collection which would reduce the collection and disposal costs. Moreover, less nappies in landfills means less methane in the atmosphere and less impact to human health.

How to get nappies out of the waste bin?

The best way is to avoid using disposable nappies by expanding the use of reusable nappies. If we want to keep on using single-use nappies another way is to find a way to seal them so that they don’t smell and therefore can endure more time in bin. However this doesn’t solve the disposal and sustainability problems. 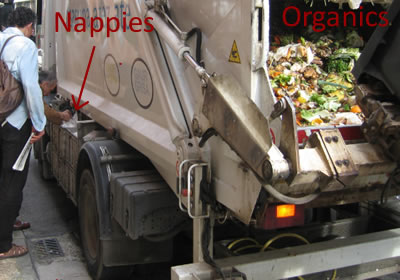 Another solution is to facilitate special bins/collection days for nappies so that they don’t contaminate the other waste in the bin and hence reduce the frequency of waste collection. This is done in most door-to-door collection systems.

Lastly, another option if we were to continue using the single-use disposable nappies would be to produce nappies with compostable bio-plastic. This does seem a solution at first hand for our busy societies. However, studies have shown high levels of zinc present in the compost, which originate from hand-creams and other additives used to avoid nappy rash. Toxins in compost speak against the option of compostable nappies.

The advantages of reusable nappies

Reusable cloth nappies have many advantages:

– they save money for the user (from 1000€ to 2000€ per baby) and to the community (less putrescible waste = possibility to reduce the frequency of collection = lower collection costs and odours). Moreover, these nappies can be re-used when the baby has grown up, meaning that they could be sold, passed on to the next child or friends/relatives!

It is also important to note that single-use nappies externalise the costs of collection and treatment to the public administration and hence to the consumer. In other words, the price of single-use nappies in the supermarket doesn’t include the costs for the society and the environment once the product leaves the shop. In the end we all end up paying for it when the company, following the polluter pays principle, should be the one shouldering these costs. If these costs would be internalised in the price the economic advantage for reusable nappies would be even bigger.

– reduces the environmental impact: 1000kg of non-recyclable waste is prevented during 3 years. Plus the production and use of reusable nappies use less than half the water, need only one eigth of non-renewable and 90% less of renewable materials, use one third of the energy and the use of soil is from 4 to 30 times less intensive.

– reduce chemical exposure for the baby: the cellulose that touches the baby’s skin is produced and bleached with chemical products that are in contact 24h with the skin which favours the occurrence of hypersensitivity.

– helps de local economy – in many cases the reusable diapers are produced locally by the community in contrast with the industrial production of single-use nappies. For instance in Capannori, Italy, local women are working from home to produce the nappies of the company. A similar case we find in Reus, Spain.

In Europe there are several good experiences of implementation of reusable nappies:

– In Flanders, Belgium, the administration co-finances the purchase of reusable cloth nappies,

– In the UK a waste minimisation campaign (The Real Nappy Campaign) was very successful in bringing this issue closer to the people. 80% of municipalities in the UK support the use of reusable nappies and effective service of nappy laundry is in place,

– in Austria 10 to 15% of the people confirm the use of reusable nappies,

– in Italy the use of reusable nappies is widespread in those communities adhering to Zero Waste,

– In Catalonia, Spain, there has been several tests to introduce reusable nappies in kindergartens which have proven to be a saving for the school –decrease in nappies use of 37% and reduction of 147kg/year per baby- and a way to promote reusable nappies among parents –many of whom decide to adopt the system at home-