The shoe producer Puma in cooperation with the FuseProject has set itself in the path to minimise waste and is today a reference for other companies on greening production. As Puma says in a good understanding of waste hierarchy; they make better use of boxes by not using them. 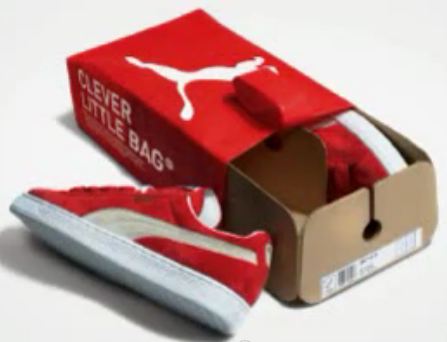 After 21 months of studying different options to reduce the environmental impact, minimise the use of boxes, diminish shipping costs and hence reduce waste, and after 2000 ideas and 40 prototypes Puma concluded that the best solution was not to use a box and instead use a 100% cornstarch fully biodegradable bag.

The “clever bag solution” represents a 65% reduction in the use of cardboard which means saving 8500 tones of paper,20.000 milion megajoules of electricity, 1 milion liters of fuel, oil and 500.000 liters of diesel, 1 milion liters of water and reducing CO2 emissions in 10.000 tones.

On the top of that Puma has phased-out always dangerous PVC from its shoe soles and is producing smaller handtags which also reduces paper use.

The reduction of waste in Puma has brought not only less environmental impact. It has also reduced the costs, raised the green credentials of the company which will make it more appealing to new costumers. A good example of how Zero Waste is not only possible but also highly recommendable corporate strategy!

They make better use of boxes by not using them.