Zero Waste growing in the UK

Last Saturday 17th of April 2011 took place in London the annual meeting of the Zero Waste Alliance UK with participants coming from Scotland, Wales and England. 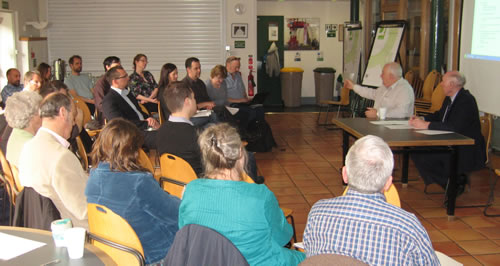 Among the participants there were activists, academics, professional recyclers, social entrepreneurs, politicians and average citizens interested in the topic and it showed the growing interest for the Zero Waste philosophy in the country.

The meeting served to strategise about future plans of the Zero Waste Alliance UK and it also elected a new board and directors.

Among other speakers there was the Zero Waste pioneer, Robin Murray, an industrial economist author of the book “Creating Wealth from Waste” published in 1999 and reference for the Zero Waste philosophy. All in all it was a very stimulating event that laid the ground for a year of expansion of Zero Waste in the country.

Excerpt from Chapter 14 of the book “Creating Wealth from Waste” from Robin Murray:

A programme for zero waste

1. The economic playing field must be rebalanced. The hierarchy of profitability must match the environmental hierarchy. This can be done by revising waste taxes and public benefits in three ways: o introducing a disposal tax that reflects the environmental hierarchy o cutting the subsidies presently given to incineration o introducing a price guarantee scheme for recycled materials to fund the build-up costs of four stream recycling.

2. The £550 million raised in waste taxes must be re-channelled to a Zero Waste Fund. This requires: o a change in the landfill tax regulations so that the 20 per cent offsets are paid into the publicly-run recycling fund o earmarking a further 20 per cent to support employment and environmental goals through recycling o amending the packaging recovery regulations so that payments by the ‘obligated parties’ are channelled to recycling collectors.

3. Establishing a Zero Waste Agency to administer the transitional funds and ‘animate’ the change.

4. Founding a new type of Green Academy, equivalent to the German technical schools of the mid-nineteenth century. It would be charged with developing organisational forms, knowledge and skills relevant to zero waste, and new ways of generating ‘distributed intelligence’. Its curricula and priorities would be set by the needs thrown up by the new environmental systems. Hence its research, teaching and skill formation would be linked closely to ground level projects – following the approach of the Ulm School of Design – and provide learning resources to those in or outside employment.

5. Appointing Zero Waste Advisers – some recruited from leading recycling and reduction projects overseas – to advise on recycling schemes and projects. The group would be part of an international network, promoting exchanges and part-time attachments, and linking into practitioners’ associations.

6. The launch of a ‘Closed Loop Industrialisation’ Initiative, promoting the development of secondary materials industries, ecodesign and hazard reduction technologies. In addition to material productivity, it would aim to promote ‘de-scaling’ technologies suitable for local and regional economies. It would be organised in conjunction with regional development agencies.

7. The extension of producer responsibility into new fields, not only electrical and electronics appliances, end-of-life vehicles and tyres, but other durable equipment, newspapers, and hazardous products and materials. The weight of responsibility should be placed at the point of product and process design, since they have the greatest capacity to develop alternatives. In each case, the finance contributed by producers should be re-channelled to develop the alternatives.

8. Devolving responsibility for waste disposal to districts, through direct payments for the costs of disposal (rather than property-based precepts) and giving districts responsibility for identifying and negotiating disposal options within their own boundaries or with neighbouring districts. This would represent the proximity principle with teeth.

9. Restoring public confidence in wade management and democratising risk through: planning reform to give financial support and access to information to civil groups and neighbourhoods affected by waste proposals; a new culture of openness in regulatory bodies; an independent waste hazards control advisory body; and an environmental freedom of information provision.

10. A govemment-led commitment to the zero waste target ‘within a generation’, reflected in the above measures and the adoption of tighter targets to ‘reduce with the aim of eliminating’ mixed waste disposal by 2010. This would include a phased ban on organic waste in landfills and on landfilling or incinerating hazard-producing materials, and a moratorium of new mixed waste incinerators for five years.Among other speakers there was the Zero Waste pioneer, Robin Murray, an industrial economist author of the book “Creating Wealth from Waste”