A Zero Waste family is possible!

Can an average person really create Zero Waste? The challenge was set and during the week 10-17 March 2008, one mother in Bury St Edmunds -UK- gave it a go. 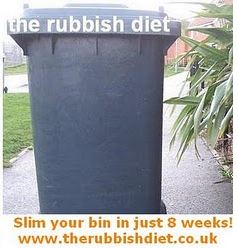 Not being the typical greeny in the beginning she was sceptical about being able to reduce the rubbish to 50% but she managed in only 2 weeks. This motivated her to continue further. After a 8 weeks she only threw out a plaster!

This housewife is Karen Cannard, now an avid blogger in The Rubbish Diet. Karen is a housewife and now freelance writer, based in Bury St Edmunds, where she lives with her husband and two young children.  The blog was only intended to last for just 8 weeks, to chart Karen’s attempts at slimming down her bin for Zero Waste Week in March 2008.  However, having realised the importance of the issue it has since been impossible to shut the woman up and went on to inspire many others.  As a result, Karen’s work was shortlisted in the 2009 Media Guardian Awards for Innovation, in the Independent Media category and was also a finalist in the CIWM awards for Environmental Excellence in the category of Recycling Champion.

Karen now spends her spare time talking rubbish with anyone who will let her and challenges everyone, everywhere to undergo their own Rubbish Diet challenge.  She’s also a regular guest on BBC Radio Suffolk and makes frequent appearances on Heart FM as well as BBC Three Counties Radio and BBC Essex.

Ironically, Karen was not particularly green when she started this blog and still insists that despite her sustainable tendencies, she is still an almost average member of the mainstream sector of society that is gradually greening up.

As therapy to her newfound busy life, she’s even busier penning her memoirs, which she hopes one day to turn into a book: “Almost Mrs Average’s Rubbish Diet: the confessions of an accidental eco-blogger“. With her tales of domestic disputes,  impersonations of Mrs Overall, interviewing a celebrity in her bedroom and being interviewed live on a landfill site for national TV, she hopes it will engage folk from far and wide, including those who haven’t even given a second thought to reducing their waste.

Can you do it too? Why not try your own Rubbish Diet and slim your bin? You’ll be amazed at how easy it really is and you could even save some money. If “Almost Mrs Average” can do it, you can too. See here for a plan to reduce your household waste in only 8 weeks.

It is true that most of the times consumers don’t have the choice for sustainable products but this is clearly a growing market and the example of Karen shows that it is possible to live a more sustainable life without much effort. In the following video you can see some ideas of how to turn into a Zero Waste family.

If “Almost Mrs Average” can do it, you can too.